Although evolutionists claim that the similarities between humans and chimpanzees prove that we evolved from ape-like creatures, the fact still remains that man can do many things that animals never have been (and never will be) able to do.

Consider, for instance, man’s ability to speak. The Bible tells us that Adam was created with this ability “in the beginning.” The very day he was created, he named all of the animals before him (Genesis 2:19), and later he used language to offer excuses as to why he disobeyed God. Humans carry on conversations all the time. But when is the last time you heard the monkeys down at the zoo converse with one another using words? Or, when have you ever seen your dog talking to (not barking at) the cat next door? As one evolutionist admitted: “Language does indeed create a gulf between Homo sapiens [humans] and the rest of the natural world.” The gift of speech is a fundamental part of man’s nature that likens him to God and separates him from the rest of creation. 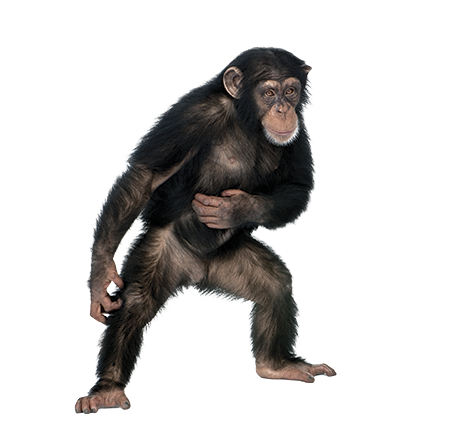 Unlike animals, man also is creative. He has built spaceships that travel 240,000 miles to the Moon; he has made artificial hearts for the sick; and he continues to construct computers that can process billions of pieces of information a second. Animals, on the other hand, cannot do such things because they lack the creative ability that God gave only to man. Beavers may build huts, and spiders may weave webs, but they are guided by instinct. Thousands of attempts have been made to teach animals to express themselves in art, music, and writing, but none has produced the hoped-for success. Simply put, a huge gap exists between humans and animals in the realm of creativity.

Finally, unlike animals, man always has sought to worship a higher being. Even when he departs from the true God, man still worships something, whether it is a tree, a rock, or even himself. No race or tribe of men anywhere in the world lacks the ability and desire to worship. However, no chimp or dog ever stopped to sing a hymn of praise or offer a prayer of thanks to its Creator.

There is no doubt that man’s unique abilities separate him from the animal world and liken him to God. The first chapter of the Bible reveals that humans are created “in the image of God” (Genesis 1:26-27). This doesn’t mean God created us in His physical image, because God is spirit (John 4:24), and spirits don’t have a physical body (Luke 24:39). Instead, we were created with many of the qualities God possesses (though on a different level)—like being able to speak, to love, to make our own choices, and to be quite creative. How awesome it is to know that we bear God’s image!