According to the theory of evolution, humans evolved from ape-like creatures many millions of years ago. This idea is absolutely false, and this Discovery issue is dedicated to showing you why. However, once we have established that humans did not evolve, we must find the real explanation for their existence. Fortunately, the Bible gives us the true story of man’s origin.

“In the beginning God created the heavens and the earth.” This is the first sentence in Genesis, the first book of the English Bible. The first two chapters of Genesis tell how God created the Sun, Moon, sky, land, plants, animals, and everything in this Universe in six, 24-hour days. But there was one special creature that God created who was not like any of the animals.

On the sixth day of Creation, God said “Let Us make man in Our image, according to Our likeness” (Genesis 1:26). In order to make man, God formed him from the dust of the ground and breathed into his nostrils the breath of life. His name was Adam. Adam was God’s greatest creation on Earth; he could walk, talk, think, make decisions, and do many other things that the animals could not do. But there was one problem; Adam was very lonely because none of the other creatures was a suitable helper for him. For this reason, God caused Adam to fall into a deep sleep. As Adam slept, God took one of his ribs and used it to form a woman whom Adam called Eve. Adam and his wife Eve were the first two people to walk on the Earth. They did not evolve from ape-like creatures over a long period of time. God created them on the sixth day of the first week.

Even Jesus spoke about Adam and Eve when He said, “from the beginning of the creation, God made them male and female” (Mark 10:6). If evolution were true, the Universe would have existed billions of years before humans ever existed. That would mean that Jesus did not tell the truth. But we know that Jesus always told the truth. And we know that humans have been on the Earth “from the beginning of creation”—the sixth day of the very first week of Creation to be exact.

You are a human being who has been made in the image of God, exactly like your ancestors Adam and Eve. Don’t be fooled into thinking that humans evolved, because they did not! 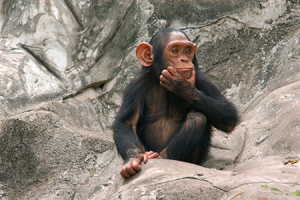