No, the story of “Jack and the Beanstalk,” with its 100-foot-tall giant, is not true. But that doesn’t mean there haven’t been very large humans that have walked the Earth in the past. The ultimate proof for such giants comes from the Bible. After leaving Egypt and before entering the Promised Land, the Israelites sent 12 men into Canaan to investigate what they were up against. After the 12 spies returned from studying Canaan, they gave a report to the Israelites. After the Israelites listened to the spies and refused to trust and obey God to conquer the land of Canaan, God punished them by making them wander in the wilderness for 40 years. Moses reported on their travels, mentioning giants who had been in certain areas in the past. “The Emim had dwelt there in times past, a people as great and numerous and tall as the Anakim. They were also regarded as giants, like the Anakim, but the Moabites call them Emim” (Deuteronomy 2:10-11). “For only Og king of Bashan remained of the remnant of the giants. Indeed his bedstead was an iron bedstead…. Nine cubits [13½ feet] is its length and four cubits [6 feet] its width, according to the standard cubit”(Deuteronomy 3:11). A king-sized bed is only 62/3 feet long. So, Og’s bed was longer than two king-sized beds together!You probably know the story of David and the giant Goliath.

And a champion went out from the camp of the Philistines, named Goliath, from Gath, whose height was six cubits and a span [about 9 feet, 9 inches]. He had a bronze helmet on his head, and he was armed with a coat of mail, and the weight of the coat was five thousand shekels of bronze [about 157 pounds]. And he had bronze armor on his legs and a bronze javelin between his shoulders. Now the staff of his spear was like a weaver’s beam, and his iron spearhead weighed six hundred shekels [about 19 pounds] (1 Samuel 17:4-7a).

Since we know the Bible is inspired by God, we know what it says is true.

The Bible tells us there were humans in the past who were over nine feet tall
(Goliath)—as tall as African bush elephants. Some humans may have even
been around 13 feet tall (Og)—almost as tall as a short giraffe! Not that it would be needed to prove that giant humans lived in the past, since the Bible has already settled the question, but fossil evidence of giant humans has been discovered as well. A group of humans called Homo heidelbergensis [HIDE-ul-bur-GIN-sis] is described as being enormous—over seven feet tall. Their huge size does not seem to have been due to sickness, disease, or a random exception, because many different fossils of this group have been found, and all tend to be big.

Another group, called Meganthropus [MEG-un-THROW-pis] palaeojavanicus [PAY-lee-oh-jav-un-EYE-kis], was discovered in the 1940s. Few fossils have been found of Meganthropus, making it hard to know just how big this giant was and whether it was even human. But many scientists group him with the homo varieties (considered by many to be the human kind). From the size of his teeth and jaw, his height has been estimated to be about eight feet tall! These fossils are all found in rock layers that were formed after the Flood. (No humans have been found in layers thought to be from the Flood.) It is possible that neither group may be the giants described in the Bible. But they provide physical evidence that shows that humans can and have grown to be much larger in the past.

In case the biblical and fossil evidences aren’t enough proof of the biblical giants, also keep in mind that we have evidence today that humans can grow to enormous heights! Even though we live over 6,000 years after Creation and, therefore, our bodies are not what they were originally (our genes have gone through a lot of decay/mutation), humans are still able to grow to enormous heights. No, I’m not talking about professional wrestler “Andre the Giant” who passed away in 1993. Although he was big (seven feet, four inches) and called “The Eighth Wonder of the World,” he was nowhere near the size of many others over the last century. Sultan Kosen is the tallest man alive today, measuring eight feet, three inches tall. Several other men over the last century have passed eight feet in height as well. The record goes to Robert Wadlow, who died in 1940. Mr. Wadlow weighed 490 pounds, and his height was measured at 8 feet, 11 inches.

How could people grow to be so tall? Consider: the average height of a man in Indonesia today is five feet, two inches tall, while the average height of a man in the Netherlands is six feet tall. The 10-inch difference mainly comes down to genes. God put a lot of potential for variety in the human genome—the potential for different colored hair, skin, or eyes, different heights, bone shape, and many other characteristics. As people in certain areas continue to have babies only with others in their area, certain physical traits can start to dominate more and more, and other traits will tend not to be expressed in that area. If taller people only have babies with taller people, for example, over time everyone in the community will tend to be taller in height. We also know that many of the tallest men in recorded history became so tall because they had pituitary gland diseases and tumors that caused them to have extra growth hormones. Though those problems often led to their death, that did not always make them weak. Edouard Beaupre (1881-1904) was able to lift an 800-pound horse. He was a strongman in Barnum and Bailey’s circus.

Bottom line:
the Bible teaches us that humans can grow to enormous heights, and the fossil record and today’s human population give us more evidence that the Bible is right. 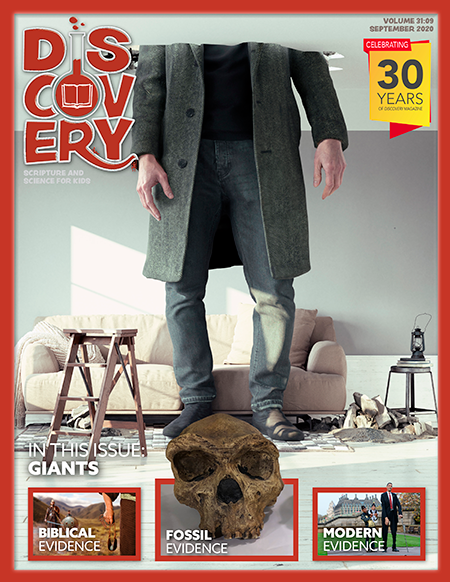 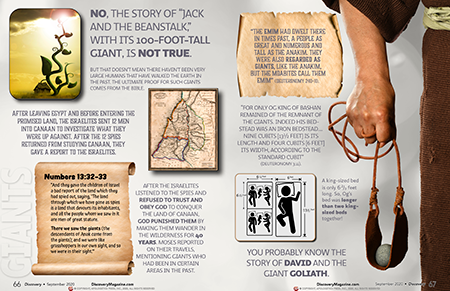 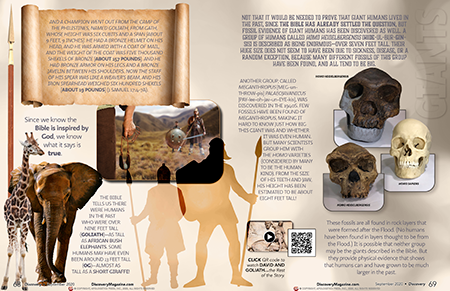 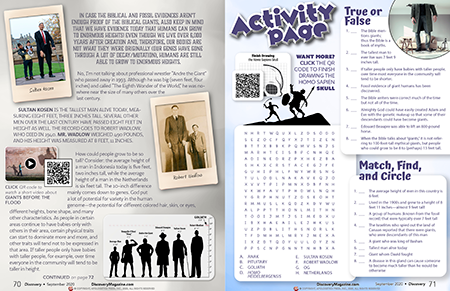 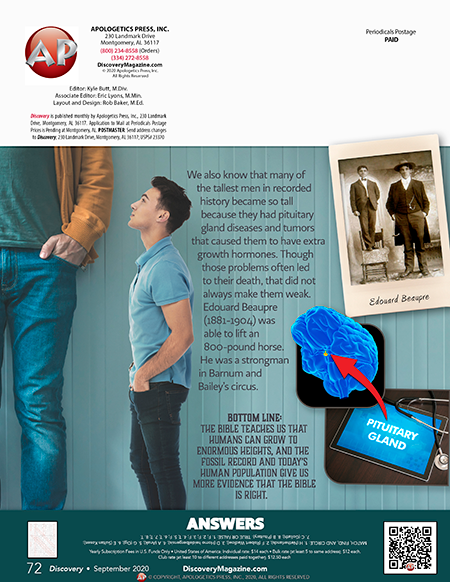