At the conclusion of Jesus’ parable of the wicked vinedressers, Jesus asked His audience, “Therefore, when the owner of the vineyard comes, what will he do to those vinedressers?” (Matthew 21:40). According to Matthew, Jesus’ hearers responded: “They said to Him, He will destroy those wicked men miserably, and lease his vineyard to other vinedressers who will render to him the fruits in their seasons” (Matthew 21:41). However, according to Mark and Luke, Jesus answered His own question, saying, “He will come and destroy those vinedressers and give the vineyard to others” (Luke 20:16; Mark 12:9). Luke then added: “And when they heard it they said, ‘Certainly not!’” (Luke 20:16). How is the Bible reader to understand these differing responses? Did Jesus answer His own question or did others? And how did those who reacted to Jesus’ teaching actually respond?

First, consider that the parable of the vinedressers is one of Jesus’ easiest parables to understand: no landowner will tolerate the workers of his land killing his own commissioned servants, and certainly not his own son. Thus, the answer to Jesus’ question, “What will the owner of the vineyard do?” is self-evident—even a child knows that the landowner will severely punish his workers.

Consider the school teacher who asks a class full of students, “What will happen to a student who chooses to beat up another student in class?” Likely, one or more in the class would respond by saying, “He will be kicked out of class and sent to the principal’s office.” But might the teacher echo the same obvious response? “That’s right! He will be expelled from this class and sent to the principal.” So who responded to the teacher’s question? In truth, both “the class” and “the teacher” responded. [Often parents do the same thing with their children: (a) They ask an obvious question; (b) They wait for the child to respond; and (c) Then (for the sake of emphasis) they respond by repeating the answer the child just gave.]

When Jesus taught the parable of the vinedressers, He was in the Temple. Some of His enemies, including chief priests, scribes, and elders, were present (Luke 20:1; Matthew 21:23), as well as anyone else (“the people—Luke 20:9) at the Temple who stopped to hear the Master Teacher. Is it possible that both Jesus (the Teacher) and some among His hearers responded to the self-evident judgment upon the vinedressers? Indeed. Is it also possible that some responded to Jesus’ parable and subsequent question and answer by not wanting to believe the truth that He had just taught “against them” (Luke 20:16)? Most certainly.

There is no proven contradiction among Matthew, Mark, and Luke. All three accounts of Jesus’ parable of the vinedressers are in perfect harmony with one another. By meditating on what each writer penned, we merely get a fuller picture of the events of the day—a picture of people who were rejecting and attempting to kill the “Landowner’s” Son. 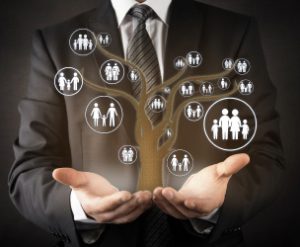