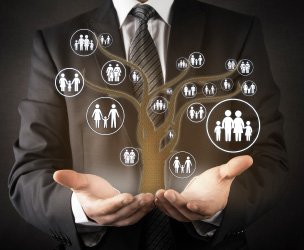 Why does Matthew’s genealogy of Christ list only 41 male ancestors if the genealogy is broken down into three groups of 14, which presumably would be 42 people?

Before answering the question, one important observation to note about the various genealogies in Scripture is that sometimes they contain gaps—gaps that are intentional and legitimate. (The only reason we know of these gaps in certain genealogies is because the Bible fills them in elsewhere.) Terms such as “begot,” “the son of,” and “father”—which often are found in genealogies—occasionally have a much wider connotation in the Bible than might be implied when such words are used in modern-day English. [NOTE: Unlike in the English language where ancestors several generations removed can be pinpointed with exact specificity quickly and easily (e.g., “Mr. Shiver was my great-great-great grandfather”), no comparable terminology was used in biblical Hebrew.] Jacob once called Abraham “father,” even though Abraham was actually his grandfather (Genesis 32:9). About 2,000 years later, the Pharisees also referred to Abraham as their “father” (John 8:39). The term “father” in these passages obviously means “ancestor.” Ezra’s genealogy in Ezra 7:1-5 omits six generations of his ancestors, calling Azariah “the son of Meraioth,” when strictly speaking Azariah was the great-great-great-great-great grandson of Meraioth (cf. 1 Chronicles 6:1-15).

In the first verse of Matthew’s gospel account, which introduces his genealogy of Jesus, the apostle wrote of Jesus as being “the son of David, the son of Abraham.” Obviously, Matthew knew that Jesus was not an immediate son of either David or Abraham; he simply used these words in the same flexible way that the ancients frequently used them (and with which the Jews were very familiar). Later in his genealogy, Matthew intentionally omitted some other names as well (e.g., Joash, Amaziah, and Azariah; cf. Matthew 1:6-16; 1 Chronicles 3:11-12). We cannot be certain why Matthew excluded these names (possibly it was for memorization purposes). We can, however, be certain that if these gaps represented a legitimate discrepancy, the Jews would have brought it to the attention of Christians 2,000 years ago when they sought to discredit Jesus’ royal lineage. [NOTE: The “all” of Matthew 1:17 (“all the generations” from Abraham to Christ) refers only to those ancestors just previously mentioned by Matthew in 1:1-16.]

Still, the question remains: why 41 male ancestors from Abraham to Jesus, rather than the 42 that Matthew 1:17 seems to suggest? The fact is, Matthew does not tell us exactly why he only included 41 names, but again, it would appear that he grouped the names of Jesus’ male ancestors in a manner that would aid in retention of the information. Though commentators have varying ideas of Matthew’s three-fold breakdown of Christ’s genealogy, it seems logical simply to take Matthew at his word. That is, it appears that the writer counted the great King David twice (again, for amplification and memorization purposes). The conclusion of the genealogy is broken down thusly: from “Abraham to David,” from “David until the captivity in Babylon,” and “from the captivity in Babylon until the Christ” (1:17, emp. added). Since David is the only name in the genealogy of Christ that is listed twice in Matthew 1:17, then it would seem logical to conclude that Matthew intentionally counted David twice, thus getting the number 42. [As the most celebrated king in the history of Israel, the Jews would have appreciated David’s name marking an end and a beginning to divisions in Jesus’ genealogy. What’s more, “the numerical value of ‘David’ in Hebrew is fourteen…. By this symbolism Matthew points out that the promised ‘son of David’ (1:1), the Messiah, has come” (Carson, 1994, 8:69).]

Since Matthew does not mention an exact name at the end of the second and the beginning of the third grouping in Matthew 1:17, but rather a time period (“the captivity in Babylon”), it may be that Josiah marked the end of the second grouping (“about the time of the captivity, as sufficiently near for the purpose of convenient computation”—Barnes, 1997), while Jeconiah began the third division, with Jesus at the end.

Throughout Matthew’s gospel account, Jesus is portrayed as King of a heavenly kingdom (Matthew 16:28; 21:5; 28:18; cf. John 18:36). Matthew refers to the kingdom (basileia) of God over 50 times. The apostle began his account of the good news of Jesus with the Messiah’s genealogy, “to show that Jesus Messiah is truly in the kingly line of David, heir to the messianic promises, the one who brings divine blessings to all nations” (Carson, 8:63). It may very well be that Matthew’s emphasis on David [who brought an end to the line of “patriarchs” in Jesus’ ancestry (1:2-6; cf. Acts 2:29), and marked the beginning of a long line of kings (1:7-11), which eventually brilliantly culminated in the reign of Christ over heaven and Earth] explains his seemingly counting David twice in Matthew 1:17.