Hundreds of years ago, sailors were terrified of a mysterious sea monster they called the Kraken. They described this creature (with some exaggeration, no doubt) as a giant monster with ten huge arms, long enough and strong enough to engulf and sink one or more ships!

Today, scientists believe that what the sailors witnessed was actually a giant squid (or perhaps a colossal squid). The giant squid is one of the most well known members of the mollusk family. It can grow to nearly 50 feet long and weigh more than 600 pounds (making it and the colossal squid the largest invertebrates in the world). The giant squid lives so deep in the ocean that few sightings have been recorded by scientists. Until 2006, this peculiar creature had never even been caught on film.

The giant squid is so big and ferocious that it appears to have very few natural predators besides the Sperm Whale. And, even though the Sperm Whale may eventually get the best of the giant squid, more than a few Sperm Whales bear scars from being cut with the serrated suction cups on the squid’s arms. (Apparently, this squid can put up a fight.) 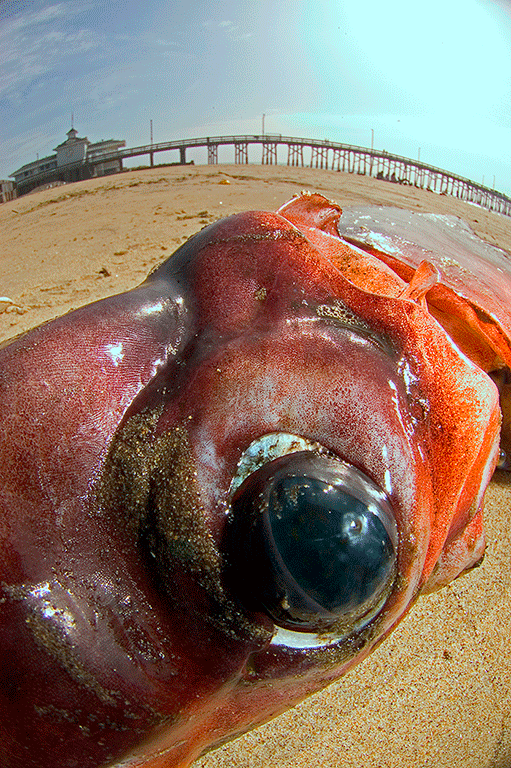 Evolutionists think that the giant squid somehow evolved its amazing plate-sized eyes, which enable it to see remarkably well under water. The giant squid can swim at great speeds, using its perfectly designed biological jet-like pump to eject water out of two little openings in its main body (called the mantle). Yet evolutionists expect us to believe this creature evolved by time and chance over millions of years. Does that make any sense? Not at all.

Design demands a designer. Tentacles do not “just happen.” Eyes do not “just appear.” And jet-like pumps are not the result of mindlessness. The amazing giant squid was designed and created by God on the fifth day of creation.