Design in the Human Body
From Issue: Discovery – July 2020

Some call it a nose, others a snout, and some a proboscis (pro-BOSS-is). Noses range in all shapes and sizes—from short to long, flat to skinny, and straight to curved. The most colorful nose in the world belongs to the mandrill, which is also the biggest monkey on the planet. While the snub-nosed monkey has a very short nose, the male proboscis monkey has the biggest nose of any ape or monkey. The large, funny-looking nose of the proboscis monkey helps to make loud sounds to attract females, as well as to warn others of predators.

Proboscis comes from a Greek word that means “for taking food.” Today, the word can refer to any “long, flexible snout.” The elephant has an amazing six-foot-long, 300-pound proboscis hanging from its face. The elephant’s trunk is the biggest and strongest nose of any land animal. The elephant uses its trunk to suck, pour, and spray water into its mouth and on its body. It picks up food with it and tosses or blows the food into its mouth. When the elephant swims, it can use the trunk as a snorkel.

There is no evidence for the evolution of the elephant’s trunk. Such amazing design demands a Grand Designer—God. Elephants are the most famous animal with a long, flexible snout, but other animals with a proboscis often have “elephant” as part of their names, too. These animals include the elephant seal, the elephant shrew, and the long-nosed elephant fish.

The most sensitive snout of any mammal in the world belongs to one of the weirdest-looking creatures. The star-nosed mole may look like its nose exploded on the 4th of July, but (as the saying goes) “looks can be deceiving.” As creepy as it may appear, the star-nosed mole was perfectly designed by God—for smelling (yes), but mainly for touching. On the mole’s 22 flexible nose stems are about 25,000 touch receptors, which are very sensitive. Since the mole lives in darkness, it relies on its sense of touch much more than sight. (How often do you try to touch things with your nose?) The star-nosed mole can send signals from its nose “feelers” to its brain with superhero-like speed. In less than 1/100th of a second from the time it touches something with its nose, it can know whether or not it is edible.

The duck-billed platypus has one amazing snout. It is extremely sensitive. Scientists have learned that the platypus’s leathery bill has a complex electro-receptor system in it. This system allows the platypus to detect very slight electric impulses in the muscles of its prey. (Platypus prey include small creatures like earthworms and tadpoles, which often hide under the mud.) Evolution cannot sensibly explain the existence of the duck-billed platypus. The design of this one-of-a-kind animal declares the existence of God, the Grand Designer.

The rhino has the most intimidating nose in the world. God made this creature with strong horns on top of its nose. In fact, the name “rhinoceros” comes from a Greek word that means “nose-horned.” On some rhinos, these horns can grow to be three to four feet long!

In Job chapter 41, the Creator talked to Job about a water-living animal that He called Leviathan. God said, “Smoke goes out of his nostrils, as from a boiling pot and burning rushes. His breath kindles coals, and a flame goes out of his mouth…. His sneezings flash forth light.” Job 41:20,18

What does this real animal that God described to Job sound like? Can you imagine being able to blow smoke and flashes of light out of your nose? Have you ever noticed that dogs seem to sniff most everything? They sniff the ground and the air. They sniff food, clothing, cars, people, and all kinds of animals, especially other dogs. Dogs use their amazing noses to detect possible meals, mates, danger, or fear (in others). Their God-given ability to smell so well is remarkable. People have bred dogs through the years to try to get the best “sniffers” (called “trackers”). The best dog noses with the best “scent cells” in the world belong to bloodhounds, basset hounds, beagles, and German shepherds.

Deer hunters know better than anyone that deer have an amazing sense of smell. A deer can smell danger hundreds of yards away. In some conditions, they can pick up odors nine football fields away! They have nearly 300 million God-designed scent receptors in their noses. Since deer have such a keen sense of smell, hunters try very hard to be as scent-free as possible. The slightest “odd” odor (such as soap or toothpaste) can give the hunter’s position away to a deer.
Dogs and deer have great smelling snouts. Yet, bears seem to have an even stronger sense of smell. Scientists say that bears have hundreds of millions of scent receptor cells in their noses. These cells are connected to millions of nerve cells, which send signals to the part of the brain that is used for smelling. This part of the brain, called the olfactory (all-FAK-ta-ree) bulb, is much larger than that in humans. Researchers believe these animals can smell another bear or a possible meal miles away. The sense of smell in bears is so good that the only logical explanation for it is the miracle of God’s creation! No scent cell, nerve cell, or olfactory bulb could be the result of mindless, godless evolution.

God may not have created humans with the sniffer of a bloodhound or the snout of a black bear, but rest assured that He gave us exactly what we needed. God gave us a great olfactory system: the cells, tissue, and nerves that all work together to make smelling a success. We can detect if food is spoiled (and thus bad for us to eat), or if it smells lovely (and most often good to eat). Think about it: You can be at one end of the house and wake up from sleep and know instantly that someone is cooking eggs, bacon, and biscuits. What a great sense of smell! And what a great God for giving it to us!

Noses can filter the air we breathe and at the same time smell scent molecules. Some animals use their noses to root for food. Others use them to make noises and attract a mate. And some use them to grasp food and to lift heavy objects. One thing is for sure: noses are one amazing gift from the Creator! 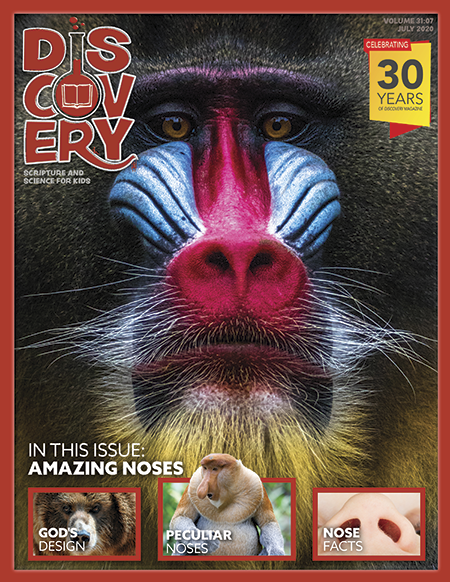 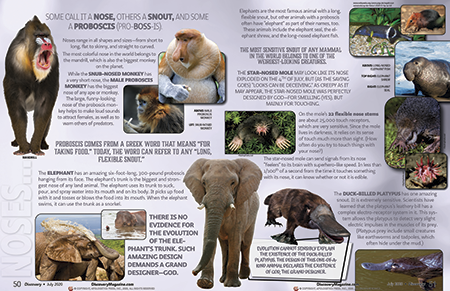 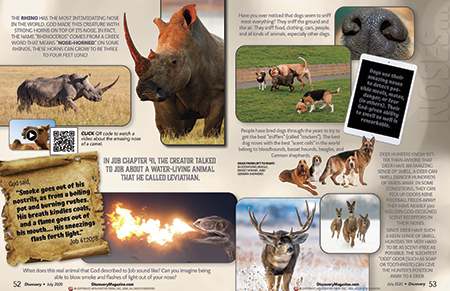 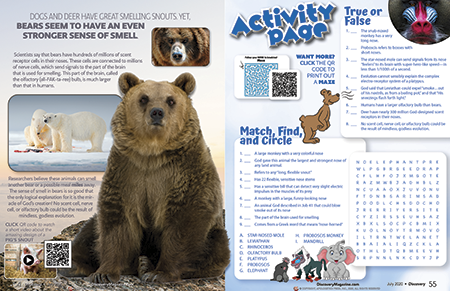 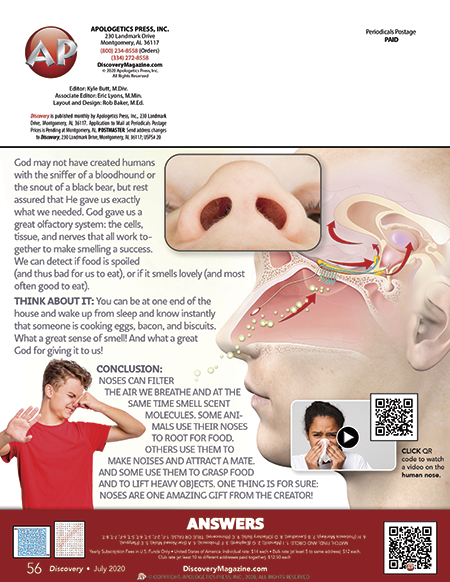