The Enormous Elephant did Not Evolve 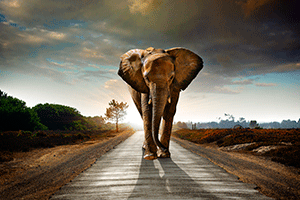 Lions may be considered the “king of beasts,” but they pale in comparison to the size of elephants. The elephant is the largest land animal on Earth today. With somewhat amusing features (like a long “nose” and big ears), the awesome Imperial African elephant can reach weights of up to 11 tons (22,000 pounds!) and measure 13 feet high.

Whereas giraffes are well-known for being long all over, elephants are best known for being big all over. They have big bellies that can hold massive amounts of vegetation. They have sizeable skulls and big brains weighing about 11 pounds. They have a heavy heart that can weigh as much as an average seven-year-old human child (50 pounds!). They have large legs that, in addition to carrying around several tons of bodyweight, can move at speeds of up to 30 miles per hour. They have rear teeth (called molars) that can grow to be one foot long and weigh 10 pounds. Their tusks, which are actually long teeth, can grow to be 10 feet long and weigh 200 pounds. Even their skin is “big.” It can grow to be up to one-inch thick in certain places. (Can you imagine having skin that thick?) Elephants even have big babies, which can weigh as much as 250 pounds at birth. The fact is, the African elephant is several times larger than the average dinosaur, which was about the size of a large cow.

The elephant is perhaps most well-known for the six-foot-long, 300-pound trunk hanging from its face. Scientists believe that the elephant’s trunk is “the most versatile organ in the animal kingdom.” It is made up of 100,000 muscle units. Some muscles run longways up and down the trunk. Other muscles radiate around each nostril, similar to the spokes on a bicycle.

The elephant can use his trunk to lift things three times the trunk’s weight. An elephant with a 300-pound trunk could lift a 900-pound cow. 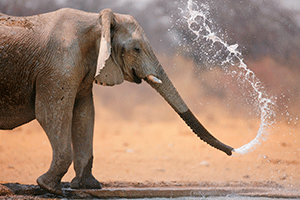 The elephant uses his trunk to suck, pour, and spray water into his mouth and on his body. He picks up food with it and tosses or blows it into his mouth. When he swims, he can use it as a snorkel. When he has an eye-itch, he wipes his eye with it. And when he gets mad, he can use his trunk in a fight.

This flexible, funny-looking, boneless flesh is not the result of random, evolutionary accidents as some would have us believe. Logic demands that mindless, haphazard happenstances could never cause such an amazing organ to come about. There is no evidence for the evolution of the elephant’s trunk.

One elephant easily could kill a man simply by stepping on him with one foot or by striking him with his powerful trunk. Yet, for thousands of years, humans have been known to live with, and even tame, these massive beasts. Over 2,200 years ago, the empire of Carthage, led by its legendary general, Hannibal, used tame African elephants to cross the Swiss Alps and battle the Romans. Today, many elephants are still being controlled by man. Tamed elephants are used in various Asian countries in religious ceremonies, or to do physical labor like hauling lumber or transporting people from place to place. Elephants also are frequently seen performing at circuses. Amazing, is it not, that humans have trained these creatures—which can outweigh them by as much as 22,000 pounds—to perform some of the same tricks we train dogs to perform. Why do you think humans are able to train these colossal creatures? For the same reason humans have been able to train lions, tigers, and bears (read Genesis 1:26-28).