The Consequences of Divorce and Remarriage

Christians increasingly find themselves faced with the dilemma of dealing with individuals (usually non-Christian) who divorce and remarry any number of times for any number of reasons, and who come wishing to become part of the local church. The tendency is to permit the couple to remain in the marriage relationship they are in when they become Christians—though the marriage was contracted in violation of Matthew 19:9. This position usually cloaks itself in feigned compassion for the couple when, more often than not, members simply lack the spiritual courage to press the biblical position. One argument posed in defense of this stance is the notion that if the couple cannot continue their marriage after baptism, then baptism did not really cleanse them and adultery becomes the “unpardonable sin.” Several points which show the error of this position are in order:

First, much is accomplished at the point of biblical baptism, but baptism was never designed to change a sinful practice into an acceptable one, or to transform a sinful relationship into a righteous one. Prostitutes, homosexuals, polygamists, bisexuals, bigamists, and adulterers must sever their relationships.

This biblical principle simply does not square with the notion that if anyone has to break up a marriage, too much is expected of them and forgiveness is not really what it’s “cracked up” to be. If biblical history teaches us anything, it teaches us that people cannot sin and then expect to have things the way they were before. More often than not, much suffering comes upon those who violate God’s will, even though they may be forgiven and have the hope of heaven.

So it is with marriage. People may reject God’s laws of marriage and fly in the face of His will. They may then be forgiven, but they may also have gotten their lives into such a fix that they will have no choice but to live single and celibate the rest of their lives. Such is not a reflection upon God’s justice or mercy. Rather, such is a reflection of man’s own stubborn disobedience and rejection of what God designed to be for man’s good. Just as a person can sin and in so doing lose his physical life without God intervening to prevent the effect of the sin (e.g., rob a bank and be killed by the police), likewise a person can so sin in the marital realm that he or she forfeits marital life without God intervening.

Third, baptism is not biblical immersion if it is not preceded by repentance. We often forget this, so anxious are we to get people into the baptistery. Repentance is not simply being sorry. Godly sorrow precedes genuine repentance which is, in turn, followed by a reformation of life (2 Corinthians 7:9-10). Reformation of life entails the cessation of sinful practices and the severance of sinful relationships (Matthew 3:8; 1 Corinthians 6:11). Paul put it this way in Romans 6:2—a person must not “live any longer therein.”

What did those who practiced sorcery do to show repentance in Acts 19:19? They burned their scrolls, showing that they were ceasing their former practices. Simply vowing to refrain from buying any further books, while insisting on keeping the books they already had, would manifest a lack of true repentance. If they held membership in a sorcery society, repentance would mean that they would sever that relationship. Simon’s repentance and baptism in Acts 8 demanded the cessation of his former relationship with sorcery. What did repentance and baptism mean to the Corinthians? Consider the following chart: 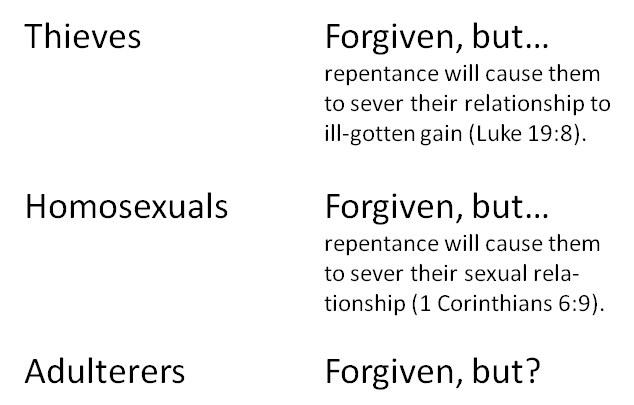 Whether the Corinthians had been practicing adultery, homosexuality, male prostitution, thievery, or swindling (1 Corinthians 6:9-10), repentance prior to baptism would mean that they would have ceased living in illicit sexual unions—whether adulterous or homosexual. They would have ceased stealing and would have severed their relationship with ill-gotten gain. They would have given up any business arrangement that would call for swindling others. Repentance, by definition, would demand such. And those who continue to live in such relationships have not really repented.

One final point merits attention. Some attempt to justify adulterous unions by comparing the sin of adultery to murder. They say that there are some wrongs which cannot be righted. In the case of murder, a man may repent but he cannot raise his victim to life. They say that an unscriptural marriage fits in the same category.

This is a false analogy. In the first place, severing an illicit relationship is not an attempt to rectify past divorces or restore past marriages. Rather, it is what is demanded by repentance and God’s laws of marriage. Second, the basic principle which does apply to both murder and adultery is that repentance demands that the individual cease committing murder and that he cease living in adultery (Colossians 3:7). Can a penitent murderer continue to murder? No. He will cease the relationship which he once had with the murderous life he once lived. Likewise, one who is living in a state of adultery will be lost if he or she dies in that state (Revelation 21:8). Just saying, “I’m sorry,” will not change that state or change that relationship into a righteous one so that it may be continued. Nowhere has God ever dealt with sin in such a way. He always demands the cessation of the sinful practice or relationship before He abundantly pardons. John the Baptizer was not asking Herod to simply acknowledge his sin, say he was sorry and ask forgiveness, and then continue to live with Herodias. Herod had married her (Mark 6:17). What did repentance demand? That they break up their marriage. Why? Because, as John declared, “It [was] not lawful for [Herod] to have her” (Mark 6:18)! There wasn’t anything that Herod could merely verbalize that would change the status of the marital relationship. It had to be terminated.

Did Jesus Disagree With Moses on Divorce?