Satan is not the Ruler of Hell

Cartoons have done much to influence the idea that many people have of Satan. The picture of a red, demon-like character with small horns protruding from his head, an arrow-head pointed tail, and a pitchfork in his hand comes to the minds of many when they hear the words devil, Satan, or hell. In fact, many of the cartoons that depict Satan with such images also show him sitting as a king in hell, determining where each person will go and the punishments meted out to those who are lost eternally. This picture could not be further from the truth. And it is because of this errant view that many—maybe even a majority—of those who read Matthew 10:28 misunderstand what Jesus meant.

In the context of Matthew 10, Jesus warned His followers that wicked men would persecute them unjustly. As He sent them out to preach, He admonished them to boldly speak the truth without fearing the repercussions. In the course of His forewarning, He said: “And do not fear those who kill the body but cannot kill the soul. But rather fear Him who is able to destroy both soul and body in hell” (Matthew 10:28; cf. Luke 12:4-5). Many Bible students who have read this verse have incorrectly assumed that Jesus was saying that Satan has the power to destroy the soul and body in hell. They have mistakenly attributed to Satan power that he never has had.

Satan is not the ruler of hell, and he does not have the power or ability to cast or drag anyone into hell. In fact, when we read about Satan’s ultimate end, we see that God is the Being who will cast Satan, also called the devil, into the “lake of fire and brimstone” (Revelation 20:2,10). Furthermore, the apostle Paul explained to the Christians in Rome that no “angels nor principalities nor powers” could separate them from the “love of God which is in Christ Jesus” (Romans 8:38-39). Those in Rome could choose to reject God of their own free will, but no power in existence, including Satan, could pluck them from God’s hand and cast them into hell.

In truth, God will cast Satan into hell at the end of time in the same way that He will cast all those who have lived unrighteously and rejected Him (Matthew 25:46; Revelation 20:15). There is no indication in the Bible that suggests that Satan will be “in charge” of hell anymore than any other unfaithful creature of God. He will find no delight in his eternal second death, and he will not enjoy any type of authority or special privileges there. Jesus’ admonition to fear the one who can cast both the soul and the body into hell was designed to encourage His followers to rely on God, be strong in the face of persecution, and trust that as long as they are right with God, no force in the spiritual world has the power to harm them. 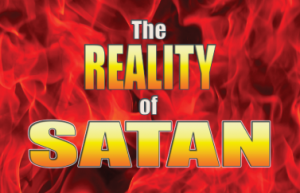