Evolutionists believe the fossil record is a record of life over millions of years. Creationists believe most of the fossil record is a graveyard recording the progress of the biblical Flood. Most of the fossil record is a snapshot of what animals looked like before the Flood. Many of the reptiles that lived before the Flood were very different than reptiles today.  Some, like pterosaurs [TARE-uh-sores], could fly!Pterodactyls [TARE-uh-DAK-tuls], Pteranodons [ter-ON-uh-dons], and Quetzalcoatlus [ket-sull-koh-AT-lus] were flying reptiles that lived before the Flood. We studied them in Discovery last year. Quetzalcoatlus was probably the largest pterosaur—and one of the largest flying animals of all time. It was as tall as a giraffe and had a 40-foot wingspan—longer than the wingspan of a Cessna 172 airplane. 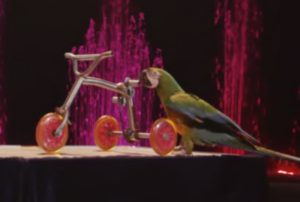