Evolutionists believe the fossil record is a record of life over millions of years. Creationists believe most of the fossil record is a graveyard recording the progress of the biblical Flood. Most of the fossil record is a snapshot of what animals looked like before the Flood. Many of the reptiles that lived before the Flood were very different than reptiles today.  Some, like pterosaurs [TARE-uh-sores], could fly! Pterodactyls [TARE-uh-DAK-tuls], Pteranodons [ter-ON-uh-dons], and Quetzalcoatlus [ket-sull-koh-AT-lus] were flying reptiles that lived before the Flood. We studied them in Discovery last year. Quetzalcoatlus was probably the largest pterosaur—and one of the largest flying animals of all time. It was as tall as a giraffe and had a 40-foot wingspan—longer than the wingspan of a Cessna 172 airplane.

The biggest walking reptiles of the pre-Flood world were the dinosaurs. Scientists organize Dinosaurs into two groups based on their anatomy:

Scientists divide the saurischian dinosaurs into two groups: theropods and sauropods. Theropods were dinosaurs with three fingers/toes, they were often carnivores (meat eaters), and they were bipedal (walked on two legs).
They included: Spinosaurus, T-Rex, and Velociraptor. The skull of T-Rex gave it the most powerful bite of the dinosaurs. Studies show that its bite force was 8-13,000 pounds—roughly two-to-three times the weight of an average car.

Sauropod dinosaurs were quadrupeds (walked on four legs), had long necks, long tails, relatively small heads, and were herbivores. Sauropods were probably the largest animals to ever live on land. Brachiosaurus, Apatosaurus, and Argentinosaurus are examples of sauropods. Argentinosaurus was arguably the longest and heaviest creature ever to walk the Earth. Scientists estimate its length as being up to 130 feet long—stretching from a football endzone to the 43 yard line. The longest land animal alive today is the reticulated python, which reaches lengths of only 23 feet—stretching almost to the eight yard line.

The description of Behemoth in Job 40:15-24 sounds very much like a sauropod dinosaur.

Plesiosaurs (PLEE-see-uh-soars),  Mosasaurs (MOH-suh-soars), and Ichthyosaurs (IK-thee-uh-soars) were some of the pre-Flood reptiles of the sea.

Plesiosaurs had long necks and small heads like sauropods. They also had four long flippers. Plesiosaurs could reach lengths over 45 feet—the length of three mid-sized cars. Scientists have found large amounts of soft tissue that have been preserved in plesiosaur fossils, proving that plesiosaurs did not go extinct 66 million years ago, as old-Earth believers claim, but much more recently.

Mosasaurs, such as the Mosasaurus, were large, carnivorous marine lizards with flippers—the front pair was bigger than the back pair. They may have been the apex (top) marine predators ever to live. Mosasaurs had few enemies—other than other mosasaurs. They are thought to have reached lengths of 56 feet. Mosasaurs had special jaws that allowed them to swallow their prey almost whole. Mosasaur collagen has been found preserved in fossils, proving that they did not go extinct 66 million years ago, as evolutionists claim.

Ichthyosaur skeletons look very much like dolphin skeletons. However, they could reach lengths up to 69 feet (Shonisaurus sikanniensis)—longer than two school buses. Typical modern dolphins are usually under 10 feet in length. Once again, soft tissue has been discovered in ichthyosaur fossils, proving they did not go extinct 95 million years ago. Fossilized ichthyosaurs have been found that were in the process of giving birth when they were killed, buried, and fossilized. Such fossils show (1) that fossilization does not take thousands of years (otherwise the creature would have decayed and disappeared before it could fossilize), and (2) evolutionists are wrong about uniformitarianism being true. Uniformitarianism is the idea that the present is the key to understanding the past. If we do not see something happening today (like the Flood), it must not have ever happened—according to uniformitarianism.

Fossilized ichthyosaurs in labor prove that something catastrophic, not uniform, happened in the past that is not happening today.

“The present is not the key to the past. The past (the Flood) is the key to understanding the present.” Creation Geologist Dr. Andrew Snelling

Job 41 describes a marine creature called Leviathan that was living after the Flood at the time of Job. Leviathan had closely knit scales and fearsome teeth.

Leviathan was so big and fierce that humans would flee from it rather than try to kill it. It had a strong neck and an extremely strong heart. Leviathan was able to raise itself up in an intimidating way and cause such crashings that even mighty warriors cowered. The underside of Leviathan was jagged, like sharp pieces of broken pottery, which left pointed tracks when moving across swampy ground. It was able to emit light, smoke, and even fire. The water around it “boiled.”

There is no modern animal that fits the description of Leviathan, although there are creatures that emit light (fireflies and bioluminescent creatures), electricity (electric eel), and even boiling chemicals (bombardier beetle).

Leviathan may have been an extinct marine reptile like a Mosasaurus or plesiosaur. Imagine what it would have been like to sail on the ocean with such fearsome sea beasts as Mosasaurs before the Flood!

“For every kind of beast and bird, of reptile and creature of the sea, is tamed and has been tamed by mankind.” James 3:7 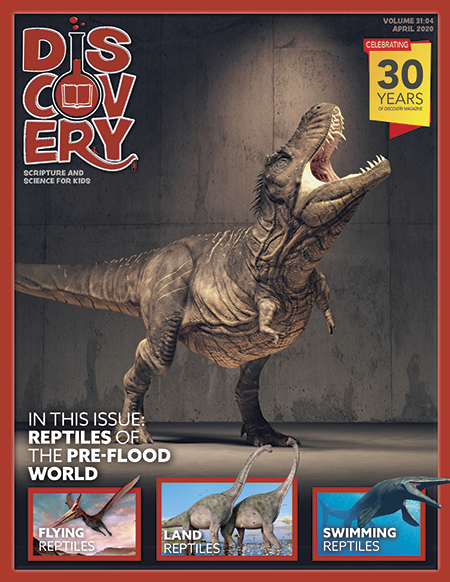 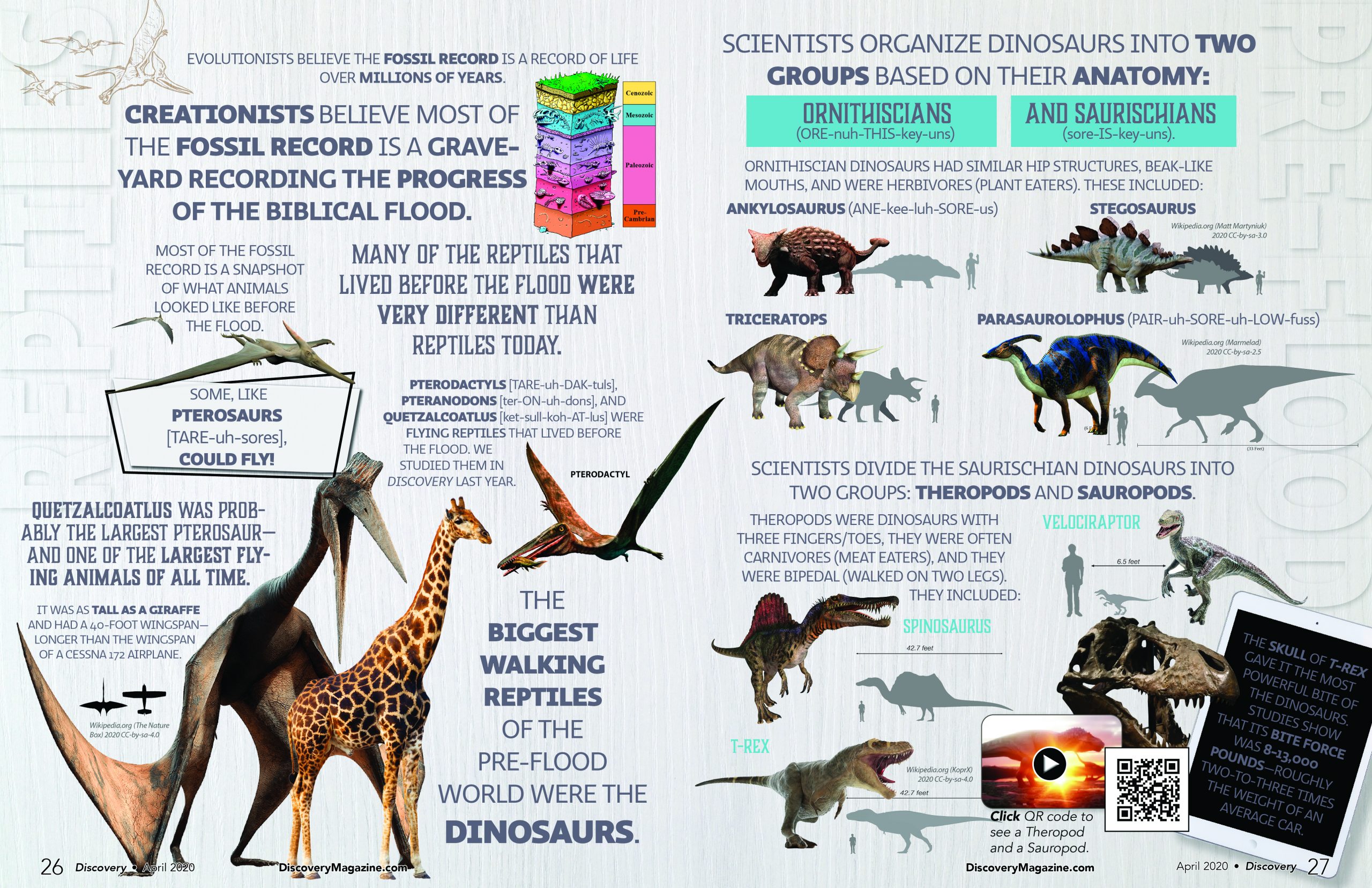 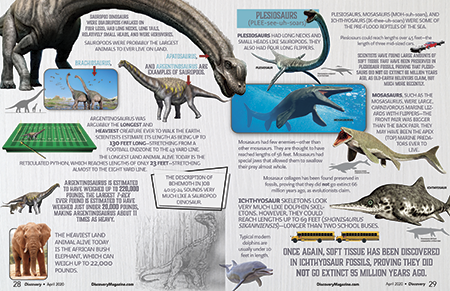 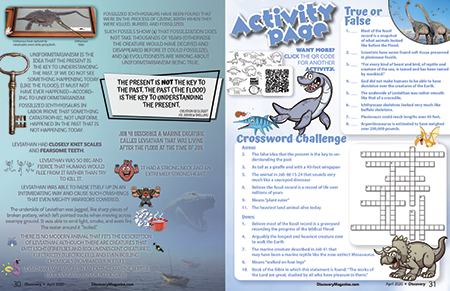 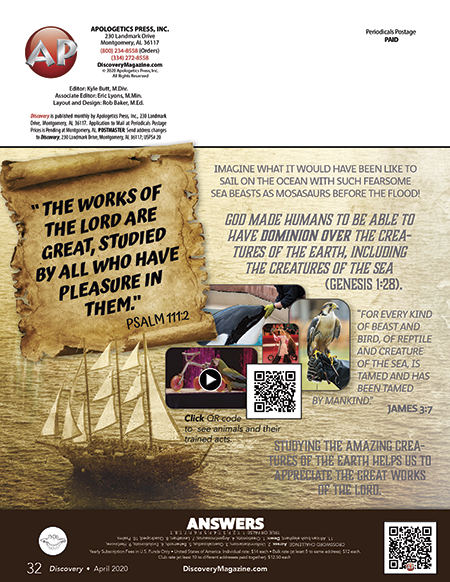