"God’s Not Dead": A Movie Review

Atheism Atheism Creation vs. Evolution Existence of God In The News
From Issue: R&R – May 2014 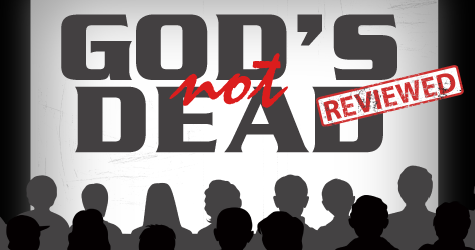 On March 21, 2014, the movie God’s Not Dead was released in 780 theaters across the country. Since then, more than 1,000 other theaters began showing the film, which grossed over $41 million in less than one month—pretty good for a movie with a budget of only $2 million (God’s Not Dead, 2014a).

Though many Christians and pro-Christian organizations around the country have been fairly complimentary of the film, general reviewers have not been so kind. RottenTomatoes.com rated the movie with one star, as only 15% of the Web site’s approved critics gave the movie a positive review (God’s Not Dead, 2014b). Although the Hollywood Reporter had a few positive things to say about the movie, in their “bottom line” they referred to it as a “simple-minded sermon” (Farber, 2014). Claudia Puig of USA Today has alleged that “the contrived premise of God’s Not Dead is anything but credible.” Puig dismissed the idea of a professor at a respected academic institution ever criticizing religion as “primitive superstition,” saying, “Even if a teacher believed this, it’s highly unlikely he would declare it to a class full of students” (2014, emp. added).

The fact of the matter is, belligerent criticism of theism and Christianity has been occurring on college campuses all over the country for years, and it is very appropriate for God’s Not Dead to raise awareness of such bullying from various intolerant, liberal professors. Sometime ago a gentleman, who had been a student at a well-known university in the southeastern United States, visited with us after one of our lectures and recounted how, at the beginning of one particular semester, a science professor asked students in the class to stand up if they believed in God. Seven individuals out of a fairly large class rose from their seats. The professor then went on to say that by the end of the semester not one of them would stand up when he asked that question. Sure enough, toward the end of the semester the professor posed the question again, “How many of you believe in God?” Only one student stood up. Several months later, another student from the same university confirmed that the same thing happened in one of her classes. There was obvious bullying and intimidation taking place. The often-overlooked fact is, theistic, creationist, and Christian-oriented students and professors are frequently the target of liberal, atheistic, and/or evolutionary professors and department heads (e.g., Kingkade, 2013; Bergman, 2008; Stein and Miller, 2008; see also Miller, 2011).

Perhaps the most powerful and pervasive message of God’s Not Dead is that any person who calls himself or herself a Christian must be willing to sacrifice everything for Christ. The hero of the movie, a young university freshman named Josh Wheaton, is willing to sacrifice his relationship with his fiancée, his university career, his future job, and his reputation to stand up for God’s existence. In a subplot, a young Muslim student is willing to sacrifice her family relationships for her belief in Christ. A freshman student from China is consistently urged by his father to stop thinking about “foolish” religious ideas and concentrate on his grades, but the young man refuses. And the girlfriend of the antagonistic atheistic professor breaks off their relationship because of her religious convictions.

This message of sacrifice is both biblical and extremely important in our increasingly self-centered society. Jesus said: “Whoever desires to come after Me, let him deny himself, and take up his cross, and follow Me…. For whoever is ashamed of Me and My words in this adulterous and sinful generation, of him the Son of Man also will be ashamed when He comes in the glory of His Father with the holy angels” (Mark 8:34,38). In all of our years as Christian apologists, we have seen countless “Christians” bowing to the secular standards of our day, afraid to stand for the truth of the Bible and God’s existence. We could recount stories of college freshmen too afraid of ruining their reputations or of getting a bad grade to stand up for their belief in God. We could tell of university professors who were so very concerned about tenure, their salary, or their teaching positions that they refused to speak or write about their faith in Christ because of the possible repercussions. How many school teachers have allowed their Christian influence to be silenced because they might lose their job? It truly is a shame to see the sacrifice of Jesus Christ on the cross and the complete dedication of His early followers who “rejoiced that they were counted worthy to suffer shame for His name” (Acts 5:41), and then witness certain “Christians” today who will not even acknowledge in public that they believe in God or His Word. Any faithful Christian would have to say “Amen,” to the movie’s main message that following Jesus requires complete sacrifice to His Will.

Unfortunately, the main message of the movie is overshadowed at times by the failure of the movie to accurately apply it. For instance, although Josh, the hero, is to be commended for his study and some of the effective arguments he used in class, at times during his defense he affirms error. For example, he implies that the Big Bang is scientifically and biblically credible, and that God could have used evolution as the process by which all life (including humans) came into existence. Not only is the Big Bang an unscientific idea (May, et al., 2003a), it is an unbiblical idea as well (May, et al., 2003b; Lyons, 2003). Additionally, the idea that God directed the process of evolution to produce life is equally unbiblical and antiscientific (Houts, 2007), though it is very appealing to our secular culture. In their attempt to make belief in God more palatable (by not making Josh, what Screenit.com calls, “a simple-minded believer who thinks the Earth was created…in just under a week”—God’s Not Dead, 2014c), the producers of the film fail to stand courageously against the foolish theories of cosmic and biological evolution and stand unashamedly for the truthfulness of the biblical account of Creation.

Furthermore, the movie completely misrepresents how God has commanded people to be saved. The clearest example of this false teaching comes at the end of the movie. In a tragic accident, the atheistic professor is struck by a car and is about to die. It just so happens that a denominational minister is on the scene. The minister begs the atheistic professor to call on the Lord, say a version of the “sinner’s prayer,” and receive Jesus into his heart. Yet such teaching is never found in the Bible (Lyons, 2004; Jackson, 2014). God requires faithful obedience to the Gospel plan of salvation in order to receive the gift of salvation (Lyons and Butt). Paul informed the Thessalonians that at the end of time Jesus Christ will be revealed from heaven “with His Mighty angels, in flaming fire taking vengeance on those who do not know God, and on those who do not obey the gospel of our Lord Jesus Christ” (2 Thessalonians 1:7-8, emp. added). What the atheistic professor did in the movie to be “saved” is not what the New Testament means when it says to “obey the Gospel” (cf. Romans 6:3-4; Matthew 7:21). Thus, in the very process of claiming to teach that people should be willing to sacrifice everything for Christ, the movie producers failed to heed their own message. Not only must we be willing to sacrifice our reputations, careers, and families, we must be willing to sacrifice any manmade doctrine that is not taught in Scripture. We must be willing to leave any group or teaching, even if it goes by the name “Christian,” if and when we find it does not correspond to God’s will found in the New Testament.

Overall, we believe that God’s Not Dead effectively highlights a serious problem in universities across the United States—showing some of the challenges that many Christian students face. We also believe that Christians should take to heart the overall message of the movie: the ultimate sacrifice for the sake of Christ and the cross. We would greatly caution viewers, however, to understand that the producer’s application of the theme is occasionally lacking. Yes, the movie’s approach to a defense of God’s existence is rational and biblical at times, but then at other times it is both biblically and scientifically unsound. What’s more, the film’s presentation of how God has instructed people to become Christians is at odds with the Bible. We all need to be reminded of the importance of sacrificing everything for Christ, including compromises with the world and any long-held false religious ideas.

Bergman, Jerry (2008), Slaughter of the Dissidents: The Shocking Truth about Killing the Careers of Darwin Doubters (Southworth, WA: Leafcutter Press).