We know that nearly all birds can fly. Many kinds of insects can fly. Even mammals, such as the bat, can soar through the air. But reptiles? Who has ever heard of a flying reptile? Aren’t all reptiles “ground bound”? Some people may be surprised to learn that flying birds, insects, and mammals once shared the sky with flying reptiles.

Flying reptiles, known as pterosaurs, were some of the largest creatures ever to fly through the air. Although they are not considered dinosaurs (because, by definition, dinosaurs are land animals), pterosaurs were fearsome-looking creatures that lived together with the dinosaurs and all the rest of the animals God created during the Creation week.  Like bats, the wings of true flying reptiles were made from skin. On a bat, the skin spreads over all the fingers, but on pterosaurs the leathery skin joined to one very large “pinky” finger. The rest of the claw was free to hold and grip things.

Some pterosaurs were very small—about thesize of a sparrow. Others, like the flying reptileknown as Rhamphorhynchus, were about two feet long (from head to tail) and had a wingspan of about 4 feet. [Wingspan is the distance between the tips of an animal’s wings.] Rham­phorhynchus (meaning  “beak snout”) had short finger bones, a tail with a flat patch of skin on the end, and strong teeth that pointed toward the front of its mouth. Fossils of this pterosaur have been found in Europe and Africa.

Pteranodon, another fly­ing reptile that had a small body (about the size of a wild turkey or a goose), enjoyed a wingspan of over 23 feet. The name Pteran­odon means “winged without teeth.” This flying reptile had a very long, toothless beak with which he probably caught fish. Pteranodon bones have been found in Kansas, Texas, Delaware, and along the coasts of the country of Japan. This reptile also had a long, bony crest on the back of its skull that likely was used to counterbalance the long beak and to help steer while in flight. Even though it was not a dinosaur, Pteranodon and the other flying reptiles of the past are often pictured with the dinosaurs.

The largest known creature that once soaredabove the Earth was the pterosaur identified as Quetzalcoatlus (named after the Aztec god Quetzalcoatl). The fossil bones of one of these flying reptiles were unearthed in 1972 at the Big Bend National Park in Texas. This Quetzal­coatlus had a wingspan of 48 feet, which is longer than some small airplanes. You have to wonder if there were flying reptiles that grew even larger than this particular Quetzalcoatlus.

Evolutionists tell us that pterosaurs lived millions of years ago—supposedly long before humans were on the Earth. The evidence tells us differently, however. According to one Bible writer and two well-known ancient historians, flying reptiles once lived alongside man. Twice in the book of Isaiah, the writer mentioned “fiery flying serpents” (14:29; 30:6). Notice also the following quotation taken from Herodotus, a respected Greek historian who lived in about 450 B.C. He wrote:

There is a place in Arabia…to which I went, on hearing of some winged serpents; and when I arrived there, I saw bones and spines of serpents, in such quantities as it would be impossible to describe. The form of the serpent is like that of a water-snake; but he has wings without feathers, and as like as possible to the wings of a bat.

Herodotus knew of flying reptiles. He knew these creatures were not birds, mammals, or insects—but reptiles with wings.

Notice also what the Jewish historian Jo­sephus wrote 2,000 years ago about Moses and his army having a difficult time passing through a particular region because of the presence of snakes.

When the ground was difficult to be passed over, because of the multitude of serpents (which it produces in vast numbers…some of which ascend out of the ground unseen, and also fly in the air, and do come upon men at unawares, and do them a mischief)…. [Moses] made baskets like unto arks, of sedge, and filled them with ibes [birds], and carried them along with them; which animal is the greatest enemy to serpents imaginable, for they fly from them when they come near them; and as they fly they are caught and devoured by them.

Although Herodotus and Josephus did not mention the extremely large flying reptiles, they did re­cord that snake–like winged creatures (which could fly) lived in the distant past. 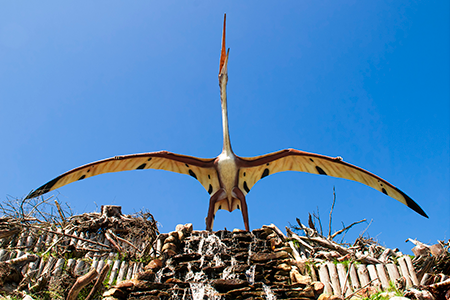 We cannot be sure how well ptero­saurs flew.The biggest ones may not have been very good fliers. Likely, they did not dart and dash about like a swallow or a hawk. They might have glided for a long time on winds and hot air rising from the ground as large birds like the albatross or condor do today. What we can know is that they were created by God during the Creation week.