Creation vs. Evolution Design in Animals
From Issue: Discovery 10/1/2016

While Eric prefers summer and fall, I definitely prefer winter. That said, I look at fall as kind of like the “Pre-Game Show” for the main event. Fall is the time of the year when I prepare for the exciting winter months. Interestingly, God designed many animals to view fall as a preparation time for winter as well.

In the January issue of Discovery we talked about some of God’s creatures that thrive in the cold. Some creatures, however, do not do as well during the cold months. So that they do not die, God made them with amazing instincts—like computer programs in their brains—that allow them to prepare for the winter months and survive. Here are three:

Some creatures (like bears, groundhogs, skunks, chipmunks, and some bats) sleep through the winter. In order to prepare for the winter months, during the fall many animals eat extra food so that their bodies make more fat. That fat is stored in their bodies, is used as insulation to keep them warm, and is slowly burned by their bodies as energy to keep them alive while sleeping.

Some creatures leave the area where they normally live (such as caribou, elk, whales, and some fish, birds, and insects like moths, Monarch butterflies, termites, and beetles). They travel to areas where it is warmer and where there is more food.

Other creatures stay in the same areas where they normally live, but they prepare for the colder months in various ways. For example, some animal bodies were designed to make helpful changes for the winter months. They might grow thicker fur in the fall. Weasels and various rabbits even grow new fur that is white, to help them blend in with the snow. Other animals (like squirrels, mice, and beavers) gather and store more food in the fall to prepare for the winter, since it is harder for those creatures to find and gather food in the winter. 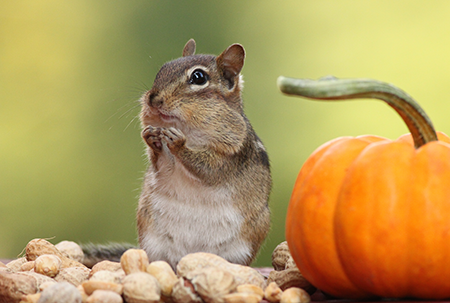 What would happen to the many animals on the planet that cannot survive in cold weather if they did not prepare in the fall for the winter months? They would starve or freeze. Evolution does not have a good explanation for how those creatures could evolve the ability to prepare for the winter. Our great God takes care of His creation and made animals so that they can survive. “Look at the birds of the air, for they neither sow nor reap nor gather into barns; yet your heavenly Father feeds them. Are you not of more value than they?” (Matthew 6:26).