Just this year, scientists have announced a newly discovered frog species: paedophryne amauensis (pee-doh-fry-nee am-ow-en-sis).They think this teeny frog is the world’s tiniest known vertebrate—the world’s smallest animal with a spine. Averaging less than one-third of an inch (7.7 millimeters or 3/10 of an inch) in length, these frogs are able to fit in the center of a dime—with lots of room left over! Up to now, the smallest known vertebrates have been fish.

The scientists who discovered this teeny, weenie creature did so by hearing the male frog’s high-pitched mating call that doesn’t sound like a frog at all. Instead, the voice resembles the buzz of an insect—a sound that is especially hard for human hearing to locate. The scientists finally had to just scoop up a bunch of leaf litter, dump it into a plastic bag, and begin sifting through the contents to discover the tiny frog.

These frogs hatch out as hoppers—rather than tadpoles—and live on the ground, not in the water. Their existence contradicts the theory of evolution, which links frogs to life in water. They live in the thick leaf litter in low-lying parts of the rainforest of the tropical island of Papua New Guinea. Even though they are little, they can jump 30 times longer than their body length. That would be like an average third-grade boy jumping almost half a football field in one jump! 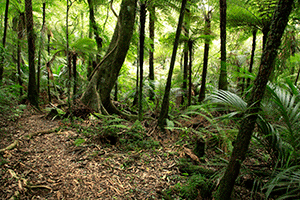 The discovery of this frog species is so recent that evolutionary scientists don’t know much about it. But, already, they are noticing characteristics that point to God as Creator. They think the frogs’ tiny sizes enable them to eat incredibly small insects, such as mites, that are ignored by bigger predators and are much smaller than the insects that frogs normally eat. Wet leaf litter on the forest floor is full of tiny insects just perfect for these frogs to consume. It makes sense that God would provide all sizes of animals to handle all the connections and interactions that must exist between His creatures and plants.

As scientists continue to study this amazing frog, they will discover even more amazing details that—if they will draw the right conclusions—will point them to the Creator.