Why Your Children Need Discovery Magazine

If your 12-year-old son came home from school one day this week and began asking questions about Ernst Haeckel’s embryonic recapitulation as an alleged proof of evolution, what would be your response? Would you be able to give him good reasons for rejecting Haeckel’s theory? Would you be able to provide him with good literature on the subject—material which is written on a level that he can understand? Or, would you just extinguish your son’s inquisitive mind by telling him not to ask such questions? What if your daughter, who just turned 13, came home from her middle school science class, asking questions about the English peppered moth and its role in teaching the theory of evolution? Could you give her a reasonable answer that she could take back to her teacher and fellow students? And what about those large reptilian creatures called dinosaurs that, according to your children’s textbooks, became extinct at least 60 million years before man ever showed up? What will you do when your son or daughter comes asking about whether or not these creatures really were created during the Creation week alongside Adam and Eve?

Your children’s schoolbooks are filled with evolutionary teachings. One particular science textbook, once used widely in middle school classrooms throughout the United States, is titled simply: Evolution—Change Over Time. In just a little over one hundred pages, the five authors and seven editors of this book have attempted to indoctrinate children with all of the “truths” of evolution. At least twenty pages are devoted to teaching about our “ape-like ancestors.” No less than fifteen pages are dedicated to teaching about dinosaurs like “Allosaurs, which lived about 140 million years ago” (p. 47). Also included in this course book are lessons about the English peppered moth, Haeckel’s embryo theory, the evolutionary geologic timetable, and numerous charts and pictures that attempt to illustrate how evolution has “taken place in the Earth’s 4.6-billion-year existence” (p. 11). 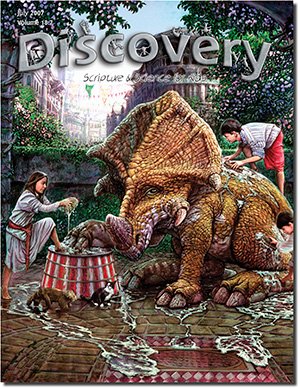 Parents, what are you doing to combat this teaching? The truth is, your children not only are getting indoctrinated with evolutionary ideas from school textbooks, but also are getting heavy doses of evolution spoon-fed to them while watching television on Saturday mornings, and while looking at picture-books that never show humans living alongside extinct creatures of the past. Most likely, if you are anything like the average parent, you simply do not have the time to spend hours upon hours researching the countless questions your children ask while in their younger years. So, what kind of ammo are you giving your children to combat the destructiveness of the evolutionary theory? I would like to encourage you to consider purchasing Discovery magazine for your family. Every month, this magazine teaches thousands of young people the truth about God’s Word and God’s world. The editors of this magazine are dedicated to teaching the facts about the Bible and science, while at the same time exposing the many errors your children are being fed in the classroom. If you are interested in ordering this colorful, beautifully illustrated, eight-page monthly magazine for your children, grandchildren, nieces, or nephews, just call Apologetics Press at 1-800-234-8558, and order your subscription today for only $12.