Why is Good Good?

In the Nuremburg Trials, the U.S. Chief Prosecutor of Nazi war criminals appealed to a law higher than “the provincial and transient” to ground his prosecution (The Trial of…, 1946, 19:383, July 26). Those of us at Apologetics Press have cited this case as an example of the need for human acknowledgment of universal morality in order to make objective judgments (e.g., Miller, 2008). And, if we appeal to a universal moral law, then this law must have as its source the universal Law Giver, the Creator (see Jackson, 1995). This is a brief way of stating the moral argument for the existence of God.

One objection to this moral argument has been summarized and adapted from a 2,400-year-old debate concerning the following question: “Why is good good?” In questioning the foolish young man Euthyphro, Plato’s Socrates tries to determine the definition of “pious” or “impious” (Plato, 1997, p. 4). Socrates offers two possibilities, but rejects them both: “Is the pious being loved by the gods because it is pious, or is it pious because it is being loved by the gods?” (p. 9). The dialogue between Socrates and Euthyphro is extensive, but the general results are these: (1) Euthyphro cannot define “pious” as “that which is loved by the Greek gods,” for the gods are said to disagree with one another on occasion—a thing cannot be both pious and impious (see p. 4). And, (2) after numerous attempts, Euthyphro cannot say what quality the pious things have, if “pious” means something other than “loved by the gods” (pp. 11ff.).

The Euthyphro dialogue has been adapted by later philosophers in the debate concerning the very existence of God, and this adaptation has been codified in philosophical literature as the “Euthyphro Dilemma” (e.g., Benn, 1998, pp. 47ff.). For example:

There is the further question, which has often been debated, but was raised originally by Plato, in his dialogue, Euthyphro. Should we follow God’s laws just because they are His or rather, because His laws are good? If the latter, then we have to decide what is good in order to know that God is good. If the former, then one has to decide whether or not to believe in God precisely on the basis of whether we can accept those laws. Either way, we have to decide for ourselves what laws of morality we are willing to accept (Solomon, 2008, p. 460).

Perhaps a clearer way of phrasing the dilemma is this: Is good good because it is good, or because God says it is good? If good is good independent of God (and He merely identifies it), then God does not hold the high position which theists have ascribed to Him. On the other hand, if good is good because God says it is, then there is the possibility that God has commanded something that is actually wrong (we are being deceived) and He is merely arbitrary in His ethical requirements: He could just as easily say that lying is good as He could say it is bad. The dilemma is meant to show that objective morality does not exist, because morality is actually grounded exclusively in each moral agent’s subjectivity (and in whatever consensus develops between agents). Any explanation of morality that involves a divine standard is either contradictory or explains itself in terms of itself (i.e., it is circular). This position corresponds with an atheistic position, as it does away with the need for a divine Law Giver.

What response to the Euthyphro dilemma is available for the Christian apologist to use? Consider the following three principles:

1. There Is A Universal Moral Law. In his book, Mere Christianity (2001, pp. 1-8), C.S. Lewis argues for the existence of a universal moral law (and a corresponding Law Giver) in the following way (summarized by Geisler, 1999):

1. There must be a universal moral law, or else: (a) Moral disagreements would make no sense, as we all assume they do. (b) All moral criticisms would be meaningless (e.g., “The Nazis were wrong.”). (c) It is unnecessary to keep promises or treaties, as we all assume that it is. (d) We would not make excuses for breaking the moral law, as we all do. 2. But a universal moral law requires a universal Moral Law Giver, since the Source of it: (a) Gives moral commands (as lawgivers do). (b) Is interested in our behavior (as moral persons are). 3. Further, this universal Moral Law Giver must be absolutely good: (a) Otherwise all moral effort would be futile in the long run, since we could be sacrificing our lives for what is not ultimately right. (b) The source of all good must be absolutely good, since the standard of all good must be completely good. 4. Therefore, there must be an absolutely good Moral Law Giver (p. 500, parenthetical items in orig.).

The conclusion that a universal moral system exists causes us to cast suspicion upon any dilemma that purports to disprove the very possibility of such a system. The Euthyphro dilemma falls into this category. Furthermore, the Euthyphro dilemma proves inapplicable when applied to the God of the Bible.

2. The Euthyphro dilemma is a false one. For the purposes of answering current critics of Christianity, the Christian apologist need not evaluate the dilemma in terms of the Greek gods, but in terms of the one, true God (i.e., the God of the Bible). The Bible teaches that God certainly is good (e.g., Genesis 1:13; 59:20; Deuteronomy 6:24; Psalm 89:14; etc.). God’s essence is to exist as He is (Exodus 3:14). God cannot exist apart from all of His attributes, including goodness. If He existed and lacked any of His attributes, then He would not be the God to Whom we refer when we speak of the biblical God. Therefore, God is good, but not in virtue of a standard of goodness that exists separate from Him. As further evidence for this, consider that there are possible acts which God refuses to do because such acts do not accord with His moral nature. For example, God cannot lie (see Miller, 2009; Colley, 2004).

Because God is infinite, goodness is measured in relation to Him. Jesus illustrated this in His parable of the workers in the vineyard (Matthew 20:1-15). In the story, only the landowner (representing God) was in a position to determine what was “good” (20:15). Humans, as created beings, are not in a position to argue with God concerning His rightness or wrongness (see Job 29-31; 38-40). The Euthyphro dilemma presumes that we do exactly that, despite the fact that we are incapable of it (Jeremiah 10:23).

Therefore, there is no dilemma as alleged by some who appeal to Plato’s Euthyphro (see Warren and Flew, 1977, pp. 26-28,32). Yet, some maintain that God’s moral principles are unreasonable or that He is contradictory (see Butt, 2009b), and we must therefore reject the biblical God in favor of atheism or another notion of divinity. We now turn to this allegation.

The creationist model would anticipate such a perfect correlation between human needs and the provisions of biblical morality, inasmuch as God was motivated by His own character to create the human race in a way that is “very good” (Genesis 1:31), and placed requirements upon humanity that are suitable for the fulfillment of human needs. To demonstrate the truthfulness of this statement would require further studies (e.g. Butt, 2009a; Colley, 2010a; Colley, 2010b). Consider the words of the psalmist:

The law of the Lord is perfect, converting the soul; the testimony of the Lord is sure, making wise the simple; the statutes of the Lord are right, rejoicing the heart; the commandment of the Lord is pure, enlightening the eyes; the fear of the Lord is clean, enduring forever; the judgments of the Lord are true and righteous altogether. More to be desired are they than gold, Yea than much fine gold; sweeter also than the honey and the honeycomb. Moreover by them Your servant is warned, and in keeping them there is great reward (19:7-11; cf. 1 Timothy 1:8).

The suitability of God’s laws to man’s needs diffuses the motivation for the Euthyprho dilemma, as the facts about God diffuse the logic of the dilemma.

Therefore, our answer to the Euthyphro dilemma is as follows: Good is defined by God’s goodness, which is inseparable from His nature. His standard of goodness applies to all mankind by virtue of creation.

Warren, Thomas B. and Antony G.N. Flew (1977), The Warren-Flew Debate On the Existence of God (Moore, OK: National Christian Press). 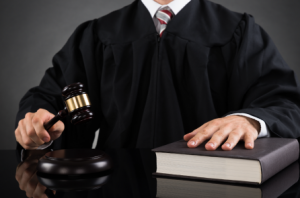