[NOTE: The following uplifting words are based on a sermon by A.P. board member Frank Chesser preached on Sunday, June 28, 2015 in Montgomery, Alabama in response to the Supreme Court ruling on homosexual marriages.] 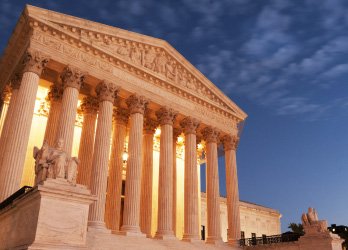 There are twin sins that could serve as bookends for all other sins—abortion and homosexuality. From a biblical perspective, these sins are so monumentally evil, that a nation’s embracement of them is a solicitation for divine judgment. On January 22, 1973, the Supreme Court of the United States legalized the slaughter of babies in the womb. Forty-two years has witnessed human intrusion into the mother’s womb, the workshop of God, extracting from the hands of God a work in progress, and crushing it into pieces with brutal tools of death. This sin has resulted in figurative oceans of abortive blood, waves of scarlet, washing against the seashore of the mind of God with unceasing cries for divine vengeance. When God’s judgment befell Judah, one of the reasons cited was the rivers of innocent blood with which Manasseh flooded Jerusalem that the “Lord would not pardon” (2 Kings 24:4). Homosexual conduct is an abomination for which God demanded the death penalty under the Old Testament (Leviticus 20:13). It is vile and unnatural (Romans 1:26). Homosexuals in Sodom and Gomorrah were “exceedingly wicked and sinful before the Lord” (Genesis 13:13). They were pursuers of “strange flesh” and are “set forth as an example, suffering the vengeance of eternal fire” (Jude 7). Legalizing such unspeakable sins is a call for the judgment of God. Hopefully, reflection upon the following points will prove helpful in this dark national hour brought about by the recent endorsement by the Supreme Court of homosexual marriages.

1. The Supreme Court’s decision was an expression of freewill. Freewill is a gift of God. It prevents man from being a robot clothed in flesh. It enables love to be a reality, the greatest of the triune traits of 1 Corinthians 13:13. But it is fraught with fearful consequences. A tragic choice of freewill made Genesis 3:6 an actuality and Calvary a necessity. Five Justices exhibited their freewill in the legalization of homosexual marriages. Some may question the value of our prayers for God to cast the deciding vote in this decision. It was God’s desire to cast His vote through one more Justice who would stand for righteousness, but it was not to be. We are haunted by God’s affirmation to Ezekiel, “And I sought for a man among them, that should make up the hedge, and stand in the gap before me for the land, that I should not destroy it; but I found none” (Ezekiel 22:30). God cannot overrule man’s freewill.

2. Sin has an aggressive nature. Sin is the most aggressive thing known to man. It is not stagnant. It never stands still. It is constantly moving forward in search of its next victim. Its appetite is insatiable. Sin was not satisfied with Genesis 3:6. It devised the false worship of Genesis 4:5, the murder of Genesis 4:8 and the world-wide wickedness of Genesis 6:5. Sin was not content with the success of its bloody assault upon the womb. It moved on to tamper with the pattern of marriage, divinely instituted by God. The vote of five Justices on the Supreme Court has opened the door to a dark and foreboding world that will prove to be a national disaster of epic proportions.

3. We should not be surprised. The nation has been moving in this direction for several decades. This decision is simply the end result of years of decadent behavior that has unraveled the moral fiber of the nation. The pace was fairly slow leading up to homosexual marriages until recently when the executive branch of our federal government, with tacit legislative approval, placed its unequivocal sanction upon homosexual unions. The homosexual community, many in the entertainment industry, the music industry, and all supporters of this aberrant lifestyle, released a collective sigh of victory. The Supreme Court took the final step in endorsing this profligate lifestyle. Sin is an alien concept to the minds of many Americans. It is no longer a part of the vocabulary of the general public. The average person could not define sin if his very life depended upon it. A new glossary of terms has been invented to extract the sinfulness out of sin and whitewash sinful acts into respectability. Hence, homosexuality is now just an “alternate lifestyle.” Should we expect a world that hates Christ (John 15:18) and the truth that comes from Christ (which demands purity and holiness of life) to possess and exhibit repugnance for moral degeneracy?

4. We need to face reality. We are likely not going to be able to change the direction of this country. It will probably never again be what it once was. This has been proven by history when tracing the rise and fall of nations and empires. It is not possible to restore the moral and spiritual foundation upon which America was constructed. We have very likely gone too far in the wrong direction to reverse our national course. We may not like the thrust of these words, but it would be foolish to argue against them. The Bible and the whole history of man testify to the truthfulness of these sentiments. There will be no Jonah-like sign (Luke 11:30) to provoke America to repentance. Refusing to accept the reality of our national state of decline will only negate our resolve to make what difference we can by shining the Gospel where we are and taking essential steps to victoriously confront whatever difficulties face us in the future.

5. Our situation today is not new. Several thousand years of human experience and national history bear witness to this truth. Many nations have preceded ours and are now buried beneath the aging dust of the Earth, and they all followed the same course. “The wicked shall be turned into hell, and all the nations that forget God” (Psalm 9:17). God destroyed the nation of Israel in Assyrian captivity because of its sin (2 Kings 17). A spiritual remnant in Judah returned from Babylonian captivity, but their national glory was gone forever. Divine judgment could purge America in some sense, but it would be most unwise to base one’s hope on a restoration of its former moral national climate and greatness.

6. Trials are inevitable. Loving God and truth beckons the world’s hatred (John 15:18-19). Persecution is like a shadow to godly living (2 Timothy 3:12). Inspiration warns against viewing trials as something “strange” (1 Peter 4:12). No nation can declare war upon the most innocent of the Earth and put a legal stamp of approval upon what God calls vile, wicked, unnatural, and an abomination and escape the judgment of God. “For the wrath of God is revealed from heaven against all ungodliness and unrighteousness of men” (Romans 1:18). There will be trials to bear under the hand of God’s wrath.

7. Trials are bearable. First Corinthians 10:13 should mightily comfort the spiritual mind with God’s promise that He will not allow His people to be tried above their ability to endure. He will aid us every step of the way. He is our “refuge and strength, a very present help in trouble” (Psalm 41:1). There was one occasion in Paul’s life when all human assistance failed him (2 Timothy 4:16), but he hastened to affirm, “Notwithstanding, the Lord stood with me, and strengthened me” (2 Timothy 4:17).

8. God is sovereign. The term “sovereignty” denotes supreme power and authority. God alone is sovereign. He is transcendent to all that is. He controls the universe. He is the “Almighty God” (Genesis 17:1) and the “possessor of heaven and earth” (Genesis 14:19). He is “exalted as head above all” (1 Chronicles 29:11). Jehoshaphat averred, “rulest not thou over all the kingdoms of the heathen and in thine hand is there not power and might, so that none is able to withstand thee?” (2 Chronicles 20:6). Nebuchadnezzar learned this truth by bitter experience (Daniel 4:35). When Habakkuk expressed concern over what he viewed as a delay in God’s judgment upon Judah (Habakkuk 1:2-4), he was informed that Babylon was on its way with the sword of violence in its hand (Habakkuk 1:5-11). God is going to attend to the moral chaos in America in His own time and way, and in harmony with His own nature and will. Let us resolve to be among the righteous remnant and beseech Him for wisdom, courage and preservation in this dark and dreary hour.

9. The Supreme Court is not THE Supreme Court. Five Justices have declared war on God and His will for the sanctity of the marital state. They have declared “evil good, and good evil” (Isaiah 5:20). They are void of moral perception. Judah was unable to apprehend the folly of idolatry (Isaiah 44:9-20), and these Justices are incapable of discerning basic moral evil. “There is no fear of God before their eyes” (Romans 3:18). When time is no more, they will stand before the Supreme Judge of all the Earth and give an account for joining the “god of this world” (2 Corinthians 4:4) in mightily enlarging the chasm between America and God, and perhaps driving the dagger of death into its national heart.

10. This world is not our home. Abraham recognized that even the land of promise was a “strange country” (Hebrews 11:9). Many others joined him in confessing “that they were strangers and pilgrims on the earth” (Hebrews 11:13). It does not take long to get old and arrive at the point in life when the time of our “departure is at hand” (2 Timothy 4:6). There is an incorruptible, undefiled eternal inheritance “reserved in heaven” (1 Peter 1:4) for the righteous servant of every age.

11. What should be our response? Refuse to allow the spiritually deranged decision of three women and two men to unduly affect your life. Greet the dawn and dusk of each day with a growing love for God, truth and righteousness. Do not crack the door of your life and allow Satan to “get an advantage” (2 Corinthians 2:11) of you. Love the saved and the lost; all of them. Do not permit dark days to rob you of your joy. “Rejoice in the Lord always; and again I say, Rejoice” (Philippians 4:4). Never quit. Never give up. Do not allow the Devil to defeat you with the rod of discouragement. Let every heartbeat sing with ceaseless gratitude for dew drops of mercy from heaven, the cross of Calvary, and exult in every good blessing that flows from the loving and generous hand of God. Lean on God, your family, and your brethren. Fill your mind with the mind of God as revealed in the Bible. Pray fervently. “Keep yourselves in the love of God, looking for the mercy of our Lord Jesus Christ unto eternal life” (Jude 21). May God bless us to this end.