Some 3,000 years ago, the psalmist extoled the faithfulness of God:

Once I have sworn by My holiness; I will not lie to David: His seed shall endure forever, and his throne as the sun before Me; it shall be established forever like the moon, even like the faithful witness in the sky (Psalm 89:35-37).

The context of Psalm 89 pertains to the covenant and perpetuity of David’s seed line. God assured him that his throne would be established even as the Moon is established in its continual, unchanging, reliable function. But God added an additional remark concerning the Moon, describing it as “a faithful witness in the sky.”

Is this remark intended to remind David that the Moon serves as a witness to the Creator of the Moon? Was He saying that David could rely on God’s covenantal promise since He is the Creator of the Moon? It is most certainly true that “the heavens declare the glory of God; and the firmament shows His handiwork” (Psalm 19:1). The Moon, as well as the planets, Sun, and other stars all testify to the Source responsible for their creation, causing right-thinking people to stand in awe at His wondrous works (Psalm 8:1-5). But why would the Moon specifically be said to be a “witness”? First, we must ascertain the precise meaning of “witness.” The underlying Hebrew term means “witness, testimony, evidence” and refers to “someone who is witness to a fact or to an event, and who is able to confirm it in case of doubt.”1 Standard English dictionaries offer the following meanings:

Cambridge Dictionary: “a person who sees an event happening, esp. a crime or an accident.”

Dictionary.com: “an individual who, being present, personally sees or perceives a thing; a beholder, spectator, or eyewitness.”

The American Heritage Dictionary: “One who can give a firsthand account of something seen, heard, or experienced.”

Witnesses, by definition, give “testimony,” i.e., “firsthand authentication of a fact” (Miriam-Webster).

So the essence of what it means to be a witness is to see something firsthand that may then be reported to those who did not see it firsthand; to report something seen to those who have not seen. In what way does the Moon “witness” to humanity, i.e., convey firsthand information to which it has access but to which humanity does not have access?

It is most certainly a stunning proof of the existence of an Almighty Power that made it. But the Moon did not see itself created. However, having been created, it now serves as a literal witness of something that it “sees” or “experiences” that humans on Earth cannot see: the light of the Sun. The Moon has no light of its own. Rather, it specifically reflects the light of the Sun that strikes its surface.2 When the Sun “sets” in the West, the rotation of the Earth causing it no longer to be visible to that part of the Earth, those living in that region of the Earth may still “see” the Sun and be certain of its continued existence by means of the reflected light of the Moon. The Moon literally “witnesses” to the reality of the Sun, conveying to night viewers of the sky the sunlight that they cannot see firsthand. Returning to our definition of a “witness,” the Moon literally “reports” what it is “seeing” firsthand to those who cannot see firsthand what is being reported. Every time we look up and see the Moon, we are simultaneously seeing its witness to the Sun. [Consider this image.] 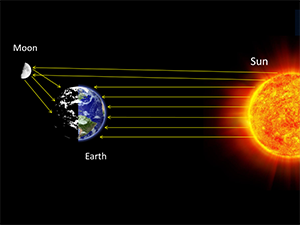 How could the psalmist have known of this incredible astronomical reality?3 His writing had to have been guided (2 Peter 1:20) by the Creator Who “set” the Moon in space “to give light on the earth” (Genesis 1:17). As the Sun reflected and witnessed to the perpetuity of David’s throne, so the Moon reflects and witnesses to the reality of the Sun. Incredibly, like the Moon,

You and I did not see with our own eyes the presence of Deity on Earth when Jesus came from heaven to fulfill His divine role, and John served as an eyewitness to that reality, reflecting His glory to us. Likewise, the majestic Moon with its reflective capacity enables us to see the higher reality of a Creator who designed the Universe in such a way that we are beneficiaries of His cosmic marvels.

2 Astronomers use the term “albedo” to refer to the reflectivity of the Moon and other celestial bodies. See, for example, G. Matthews (2008), “Celestial Body Irradiance Determination from an Underfilled Satellite Radiometer: Application to Albedo and Thermal Emission Measurements of the Moon Using CERES,” Applied Optics, 47[27]:4981-93, September 20; Jeff Medkeff (2002), “Lunar Albedo,” Notes on Lunar Features, https://web.archive.org/web/20080523151225/http://jeff.medkeff.com/astro/lunar/obs_tech/albedo.htm.