The Foolishness of Atheism

Atheists are fond of claiming that their way of thinking is logical, reasonable, and intellectual. They maintain that they are open-minded and refer to themselves as free thinkers. Unlike Christians, who are allegedly delusional, irrational, blind, and absurd, atheists consider themselves utterly rational, sensible people who follow the evidence wherever it leads.

Yet atheism says that everything came from nothing. Atheism says that an explosion caused exquisite order. It says that random chances produced precision and that life popped into existence in nature from non-life. Atheism says that the design of the human eye is a delusion, while the design of a camera is apparent. Atheism says that fish and frogs are man’s distant forefathers and that intelligence is the result of non-intelligence. Atheism alleges that either man is on the same moral plane as a moose, or he actually evolved a sense of morality from amoral monkeys. Atheism spends multiplied millions of dollars and countless thousands of hours in search of extra-terrestrial life, which has never been found.

When atheism is stripped of pompous proclamations and arrogant allegations, its naked soul is seen for what it really is: weak, illogical, unscientific, and worthless. Atheists blindly believe that, for example, life came from non-life. Rather than accept what scientific experimentation has repeatedly concluded over the past 200 years (that in nature life comes only from life and that of its own kind), atheists remain committed to a disproven theory. Man has never witnessed mindlessness bring forth intelligence. He’s never seen something come from nothing.

While trying to convince others he is galloping confidently atop a stallion called Common Sense, in truth, atheism stumbles on the back of a donkey called Foolishness. Is there any wonder why David said, “The fool has said in his heart, ‘There is no God’” (Psalm 14:1)?

For since the creation of the world His [God’s] invisible attributes are clearly seen, being understood by the things that are made, even His eternal power and Godhead, so that they are without excuse, because, although they knew God, they did not glorify Him as God, nor were thankful, but became futile in their thoughts, and their foolish hearts were darkened. Professing to be wise, they became fools (Romans 1:20-22). 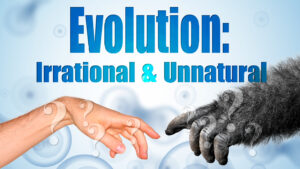