Seeing God in a Box…Fish

Constant competition between car companies rages to see which one can design the lightest, toughest, most aerodynamic, fuel efficient models. It seems that the DaimlerChrysler Company has recently put itself several steps ahead in the race by designing a remarkably efficient economy car for Mercedes-Benz. The idea that inspired this car was very simple. The designers looked to the natural world to find a model of highly-efficient, aerodynamic design, coupled with a sturdy structure that could withstand collisions. The model on which they finally settled seemed an unlikely candidate: the boxfish. 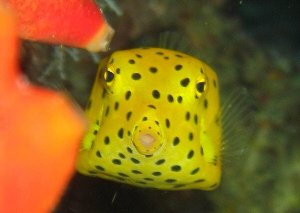 At first glance, the boxfish’s body does not appear very aerodynamic. As its name implies, it has a rather “boxy” look, and not the streamline “raindrop” shape that is used for many aerodynamic models. Upon further investigation, however, the boxfish’s shape and design happen to be amazingly efficient. As one author put it, “Despite its boxy, cube-shaped body, this tropical fish is in fact outstandingly streamlined and therefore represents an aerodynamic ideal. With an accurately constructed model of the boxfish the engineers in Stuttgart were able to achieve a wind drag coefficient of just 0.06 in the wind tunnel.” In order to grasp the importance of this drag coefficient, it “betters the drag coefficient of today’s compact cars by more than 65 percent” (“Mercedes-Benz Bionic…,” 2005, emp. added).

But the aerodynamic aspects of the boxfish were not the only helpful features used by the DaimlerChrysler engineers. The skin of the boxfish “consists of numerous hexagonal, bony plates which provide maximum strength with minimal weight” (“Mercedes-Benz Bionic…”). By reproducing this skin structure, the car company was able to achieve “up to 40 percent more rigidity…than would be possible with conventional designs.” The report went on to say that if the entire car shell were designed with these hexagonal structures, the weight of the car could be reduced by almost one-third, without forfeiting any safety features during collisions.

Such copying of the natural world is not a unique event. A popular field of study known as biomimicry has arisen of late in which scientists and technologists look to nature to supply optimal designs and functions. Ironically, the writer of what appears to be the primary article on this amazing boxfish/car relationship misses the logical conclusion of the biomimetic design, as do other scientists who study the field—that design demands an Intelligent Designer. The said writer commented, “[T]he boxfish possesses unique characteristics and is a prime example of the ingenious inventions developed by nature over millions of years of evolution. The basic principle of this evolution is that nothing is superfluous and each part of the body has a purpose—and sometimes several at once” (“Mercedes-Benz Bionic…,” 2005).

Notice the concession made in the writer’s statement that the boxfish, indeed, exhibits “ingenious invention.” Such a statement implies that some type of “genius” or intelligence is behind the invention. Furthermore, evolution has been consistently presented as a process that is maintained by naturalistic, random, chance happenings that are incapable of producing anything “ingenious” or “intelligent.” And finally, the author states that evolution leaves nothing “superfluous,” and that each part of the evolved animal has “a purpose.” This remark is ironic considering the fact that many defenders of evolution continue to use the argument that humans and animals maintain several “vestigial organs” that are supposedly useless leftovers of evolution (see Harrub, 2001, for a discussion of vestigial organs). Indeed, any theory that explains too much, explains too little. On the one hand, evolution maintains an underlying principle that nothing is superfluous, while at the same time evolution is a “fact” because animals and humans supposedly have left-over vestiges that are no longer useful? As one can see, the concept of evolution is so “flexible” and self-contradictory that it sustains no real ability to explain anything.

To the contrary, the only valid explanation for the optimal design in the boxfish is the fact that whenever we see efficient, complex design, there must be an intelligent designer behind it. Considering the fact that many of the most ingenious engineers that the car-manufacturing world can boast spent thousands of hours copying the design of the boxfish, which proved to be 65 percent more efficient in some ways than other designs, one must logically conclude that whoever designed the boxfish has outsmarted the brightest car engineers for many years. “Then God saw everything that He had made, and indeed it was very good” (Genesis 1:31).