People All Over the World Associate Atheism with Immorality

Recently, Huffington Post writer Antonia Blumberg penned an article titled “Anti-Atheist Prejudice Is Entrenched Around the Globe, Even Among Atheists.”1 In the article, she commented on research that appeared in Nature magazine.2 The summary paragraph on the Nature Web site describing the research stated that “people in most—but not all—of these countries viewed extreme moral violations as representative of atheists. Notably, anti-atheist prejudice was even evident among atheist participants around the world.”3 The researchers wrote,

Combined, these results show that across the world, religious belief is intuitively viewed as a necessary safeguard against the temptations of grossly immoral conduct, and atheists are broadly perceived as potentially morally depraved and dangerous. Viewed differently, people perceive belief in a god as a sufficient moral buffer to inhibit immoral behaviour.4

Blumberg wrote, “The study echoes the findings of a report by Pew Research Center, published in 2014, which found that majorities in 22 countries say a person must believe in God in order to be moral and have good values.”5 In truth, Charles Darwin recognized this when he stated,  “A man who has no assured and ever present belief in the existence of a personal God or of a future existence with retribution and reward, can have for his rule of life, as far as I can see, only to follow those impulses and instincts which are the strongest or which seem to him the best ones.”6

At Apologetics Press, we have written extensively on the fact that the philosophy of atheism absolutely cannot provide a foundation upon which to build a moral framework.7 It is true that atheists can behave in more moral ways than people who believe in God. But atheists cannot appeal to atheism to honestly explain or defend such moral behavior. Atheism cannot really even define the terms “moral” and “immoral.”

It is interesting that in Blumberg’s article she quoted Bart Campolo, an atheistic activist who stated, “We secularists, who pursue goodness simply because we recognize it as the surest way to flourish, need to get a whole lot better at compellingly articulating our own good news, and maybe even learn to make it sing.”8 Notice the sentiment behind Campolo’s statement. He sees morality as “the surest way to flourish.” But what happens when the morally right thing to do does not coincide with an individual “flourishing”? What happens when “doing right” means a costly sacrifice even to the point of death to help someone who might never respond in kind? You can see that even in the context of trying to make atheistic morality appear meaningful, Campolo only succeeds in showing that it is a “means to an end” way of life based on a foundation of self-preservation. Imagine what would happen if people made their moral decisions based only on what would help them “flourish.” Campolo’s articulation of atheistic morality helps us to see why the foundational tenets of atheism are distrusted around the world.

1 Antonia Blumberg (2017), “Anti-Atheist Prejudice is Entrenched Around the Globe, Even Among Atheists,” Huffington Post, https://www.yahoo.com/news/anti-atheist-prejudice-entrenched-around-203055330.html.

Why Be An Atheist? 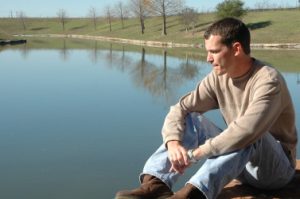 God, Atheism, and the True Meaning of Life