One Step closer to Sodom

For centuries, Christians have read Genesis 19 and wondered how a city could be as wicked as Sodom. Many Americans recall a time (not all that long ago) when a list of comparisons between Sodom and America would have been somewhat brief. Sadly, with each passing day that list is multiplying, and Satan’s influence on America is taking us one step closer to Sodom. Consider the events that occurred recently in Boston, Massachusetts. 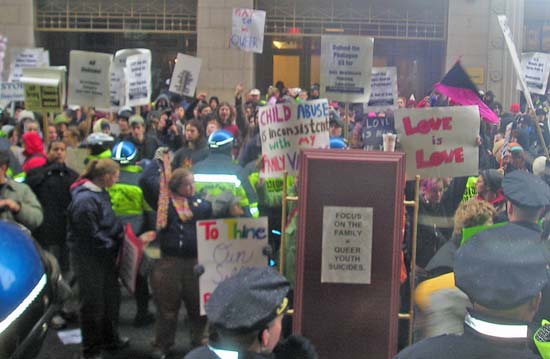 While hundreds of people assembled inside a Baptist church building to attend an all-day conference (called “Love Won Out”) on how God can help one recover from the sin of homosexuality, approximately 1,000 protesters gathered outside, nearly filling an entire city block (Vitagliano, 2006, 30:16). According to Article 8 Alliance,

They did whatever they could to harass and intimidate the attendees, including waving signs, yelling and screaming, and later they even brought a sound truck. Some of the activists went up to individual attendees and took close up photos at them, taunting them personally. The homosexual demonstrators also set up two coffins in front of the church, with frightening messages accusing the conference of causing death and suicides….

But the most frightening situation came in the afternoon. Activists jammed the entire width of the street outside and stepped up their agitation. In response, rather than attempt to disperse the crowd, the police barricaded the church doors and told people inside they could not leave for any reason (“Homosexual Activists…,” 2005).

Thankfully, there was no indication that these angry homosexual protesters were demanding sexual acts with those barricaded within the Baptist church building as the inhabitants of Sodom once did in Lot’s day. But, the mob’s scare tactics, which were so intense that police felt it necessary to barricade the church doors and forbid conference attendees to leave for any reason, are eerily similar to the angry mob outside of Lot’s house 4,000 years ago. In Sodom, “the men of the city…both old and young, all the people from every quarter, surrounded the house” and “pressed hard against the man Lot, and came near to break down the door” (Genesis 19:4,9). They despised Lot for his comments regarding their wickedness (vs. 7), and his “acting as a judge” (vs. 9). Likewise, in Boston, homosexuals spent a whole day agitating “Love Won Out” conference attendees until they finally became so enraged that police feared for the safety of those inside the church building and forced them to remain there. 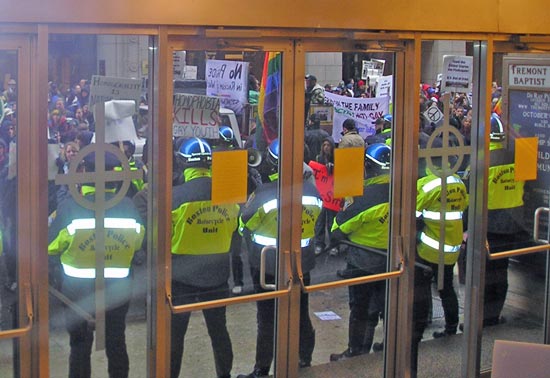 did not have a permit to demonstrate outside the church, use sound equipment or props, or block traffic for that purpose. Nevertheless, Boston police stood aside and allowed the demonstrators to do pretty much whatever they wanted. At times they even cooperated with the activists, chatting with them, directing traffic for them, and finally allowing them to completely block the street (“Homosexual Activists…,” 2005).

All without the proper permit from local authorities! Can you imagine if Christians demonstrated outside of a pro-homosexual convention without proper approval? This is precisely what happened in Philadelphia, Pennsylvania in October 2004 when eleven individuals who identified themselves as Christians were arrested while preaching outside of a homosexual event called Outfest (see “Christians Arrested…,” 2004).

While the culture war rages on, Christians must stand up for righteousness, be prepared for the persecution that will follow, and “[r]ejoice and be exceedingly glad, for great is your reward in heaven, for so they persecuted the prophets who were before you” (Matthew 5:12).