Latest Stats on Creationists and Evolutionists in the U.S.

In 2012, we reported the heartening results of a GALLUP poll on the beliefs of Americans regarding the origin and age of the Universe.1 At that time we could confidently report that belief in Creation and a young Earth had been remaining roughly constant for 30 years and that neither theistic evolution nor naturalistic evolution as separate groups were accepted by more Americans than young Earth Creation—a notable feat, indeed, considering that naturalism has dominated science in public schools for decades. The poll has since been updated twice. How do the numbers currently look?2 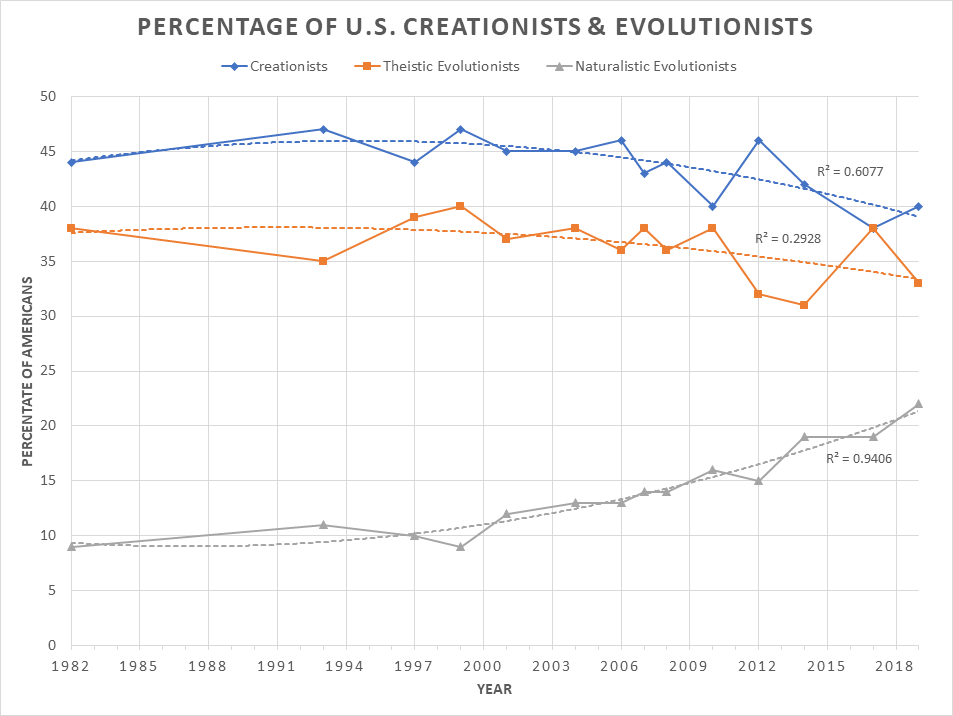 Young Earth Creation is still the leading belief among the three options in the poll, but the claim that belief in young Earth Creation continues to remain constant among American citizens is less certain. Trendlines can be misleading over short timespans, especially with confidence levels as low as those found for the creationist and theistic evolutionist trendlines. With the added data from the past eight years, the trend appears now to be downward. As has consistently been the case (and as would be expected), those who do not regularly go to church tend to believe in evolution rather than biblical Creation. Over the last 20 years, the number of Americans who are members of a Christian Church has dropped from 70% to 50%,3 and the percentage of Americans who attend worship services at least once a month has dropped to 45%.4 Obviously, if fewer people are regularly hearing the truth, fewer people will know the truth, much less believe the truth (Romans 10:17). [Parents: are you making sure your children are receiving a steady diet of the truth about Creation?]

It is noteworthy that the consistent, linear trend among Americans with regard to monthly or more church attendance (dropping 8% over the last 10 years to 45%) does not tell the whole story. Among those who identify as Christian, there has been virtually no change in monthly or more church attendance over the past 10 years: roughly 62%. That means that American “Christians” are worshiping as much as ever, but there are fewer Americans who identify as Christians. Another way to say it: Christians are not converting Americans as much as they have in the past. [Christians: are you doing enough to get the word out? If not, do not be surprised as immorality blossoms in society around you.]

Another unsurprising trend: the likelihood that a person will accept evolution and reject biblical Creation drastically climbs among those who receive a college degree. While only 16% of Americans without a college degree believe in naturalistic evolution, the number more than doubles among those who receive a degree (33%). While 48% of Americans without a college degree believe in young Earth, biblical Creation, the number halves after they receive a college degree (23%). Atheists would no doubt argue that such statistics support the contention that Christians are simply ignorant—that being educated would force them to accept naturalism/atheism/evolution. Naturalism, however, can conclusively be shown to be false and even self-contradictory.5 In truth, proper education about naturalism would cause fewer people to become naturalists. The reason a college education leads to belief in evolution is not because of knowledge or truth. When we send our children unprepared to be indoctrinated daily for four years by naturalistic college professors (who, no doubt, comprise the bulk of U.S. university professors), we can expect that they will come to believe in evolution. [Parents: are your children prepared for what they will likely hear and study in college?]

At first, the statistics concerning theistic evolution believers seem heartening, since they appear to be showing a slightly downward trend over the last 37 years. And then we see the clear, unavoidable upward trend of naturalistic evolutionists in our country. The number of creationists and theistic evolutionists from poll to poll seem to be somewhat “up and down” (making confidence in the trendlines lower). It is, therefore, more difficult to unequivocally trace the trend, but the percentage of Americans who are naturalistic evolutionists has climbed in a consistent way over the last 37 years, with little deviation from the trendline: from 9% to 22%.6 Be alarmed. A naturalistic evolutionary society would be an ugly one in which to live.7 In the words of famous atheistic, evolutionary biologist of Oxford University, Richard Dawkins, “My own feeling is that a human society based simply on the gene’s law of universal ruthless selfishness would be a very nasty society in which to live.”8 [Parents: are your children prepared to defend the faith against atheists, or are they vulnerable to the arguments they will likely encounter from the rapidly increasing number of naturalists in American society?]

It is truly amazing that the number of young Earth biblical creationists in our country has remained as high as it has over the past 37 years. It begs the question: why has that been the case, especially considering the fact that the number of church members and church attenders in our country has plummeted? At least two of the key factors are surely the following: (1) the logical plausibility of biblical Creation as compared to evolution—humans intuitively know we are designed and not the product of chance and accidents.9  In the words of famous skeptic Michael Shermer, “The design inference comes naturally. The reason people think that a Designer created the world is because it looks designed”;10 (2) the fact that Christians have been effective in making the case for biblical Creation over the past 37 years. What do you suppose would happen to the statistics if Christians gradually let down their guard and stopped making the case for biblical Creation—which very well may be occurring in some places?

Now, stepping back from the statistics, consider: what are you doing to get the word out about the foundational truths of Christianity in a day and age when they are under heavy assault? Have you given it much thought? Are you leaving it up to others to do the work? What can you do more (or better) than you are currently doing? Here are seven things you could be doing that will make an impact:

6 R2 value of 0.94, versus 0.29 and 0.61 for the polynomial trends of theistic evolutionists and biblical creationists, respectively. Calculations based on data from “Evolution, Creationism, Intelligent Design” (2019), Gallup News On-line, https://news.gallup.com/poll/21814/evolution-creationism-intelligent-design.aspx. Accessed May 11, 2020.