What were you doing on October 21st of last year? Were you celebrating National Hagfish Day, which occurs on the third Wednesday of each year? Probably not, because you most likely didn’t know that such a day even existed. There is a good chance you don’t even know what a hagfish is. Well, after reading this month’s Discovery, that will change. Let’s explore one of the most fascinating—and repulsive—creatures God ever designed. Some people call this creature the slime eel, others refer to it as the snot snake, but it is neither an eel nor a snake. It is a fish. There are over 60 species of hagfish, some of which can grow as long as four feet. The average is about 18 inches. The hagfish is most well-known for producing massive amounts of slime. Hagfish slime is so interesting, because it is truly unlike any other substance in the world. 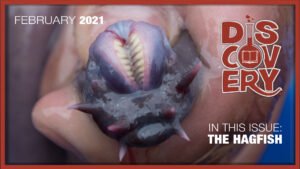