Lisa Krieger recently wrote an article titled, “How Do Flowers Know to Bloom in Spring? Now Humans Know, Too.” She reported about research on flower blooming that is being done by plant molecular geneticist Jose Luis Riechmann from the California Institute of Technology, published in Science magazine. Riechmann’s research centers on the ability of flowers to know when to bloom to take advantage of the proper weather conditions to reproduce. It turns out that for plants to survive, timing is everything. As plant biologist Jorge Dubcovsky of UC Davis stated: “Flowering time is one of the most important traits in breeding because it affects the yield of crops. Too early and you are killed by frost; too late and you are killed by heat” (as quoted in Krieger, 2010).

Reichmann believes he has identified the tiny protein that is responsible for setting blooming in motion. The protein is named APETALA1, or AP1. This tiny wonder “regulates more than 1,000 genes” and “serves as the door that opens the way to flowering” (2010). Without this amazing protein, the plant world as we know it would not exist. The importance of this single protein becomes clear, when we realize that “almost everything we eat is a plant, or something that just ate a plant” (2010).

This petite protein poses a powerful problem for the theory of evolution. According to the theory, all plants and animals evolved over billions of years by chance, random processes that were not directed by any intelligence. Although evolution has been repeatedly shown to be false (see Butt and Lyons, 2009), research like Reichmann’s continues to add more weight to the fact that evolution is scientifically impossible.

First, it should be noted that no research ever done has shown us how random processes can produce a protein like AP1. Second, even if random processes produced AP1, which they cannot, how many times of trial and error would we need to grant the evolutionary process to allow it to finally strike upon the perfectly timed sequence to bloom? If the plants that were supposedly evolving bloomed at the wrong time, they would die or fail to reproduce. While that would be bad for those individual plants, it would also be devastating for the alleged evolutionary process, since evolution would have to start over trying to randomly assemble protein AP1 after every failure. Since all evolutionary scenarios are imaginary, and not backed by real scientific evidence, it is easy to propound a scenario by which natural selection somehow “chose” the plants that happened to bloom at the right time and have the proper protein sequence. But in reality, the first wrong turn would have sent plant evolution (although there really is no such thing) back to the drawing board, as would each additional wrongly timed blooming.

In truth, there never have been millions of years of gradual, chance mutations and natural selections that produced the “intelligent” flowering plants that we see today. The intricate design of plants, as manifested by tiny proteins like AP1, testifies to the fact that an intelligent Designer created flowering plants. Plants “know” exactly when to bloom simply because, when God created them, He endowed them with the ability to perpetuate their kind. As Genesis 1:11 states: “Then God said, ‘Let all the earth bring forth grass, the herb that yields seed, and the fruit tree that yields fruit according to its kind, whose seed is in itself, on the earth’; and it was so” (emp. added). 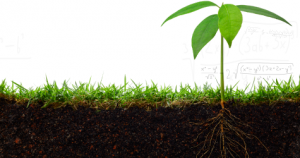 Plants that Do Math Add Evidence for God