None of us enjoys contemplating the prospect of losing a loved one to death. It is a horrible experience. Yet, if the deceased is a child of God, the pain is lessened considerably. This is why the apostle Paul could say, in his letter to the saints at Thessalonica, that we “sorrow not, even as the rest [non-Christians], who have no hope” (1 Thessalonians 4:13). When a dear one in Christ leaves this life, we sorrow—not for the one who has gone to be with the Lord (2 Corinthians 5:8), but for our own temporal loss. And it is temporal, because eventually there will be happy reunions (Genesis 25:8; Matthew 8:11).

I recently read of a case that illustrates the bleakness faced by the unbeliever when he is forced to face the prospect of death’s separations.

Marie Curie was undoubtedly the most prominent woman scientist of all time. She was twice awarded the Nobel Prize. She was married to Pierre Curie, a prominent scientist in his own right. On April 19, 1906, Pierre was run over by a galloping team of horses pulling a heavy wagon. His head was crushed by one of the wheels and he died instantly.

In a biography about her mother, Eve Curie describes how Marie was devastated by the accident. She clung to Pierre’s corpse as he was dressed for the funeral. She kissed him repeatedly. From that day, Eve says, she became “a pitiful and incurably lonely woman” (p. 247). For a long time she wrote notes to him each day in her diary. Here is one of those notations: “Your coffin was closed and I could see you no more…. We saw you go down into the deep, big hole…. They filled the grave and put sheaves of flowers on it, everything is over. Pierre is sleeping his last sleep beneath the earth; it is the end of everything, everything, everything” (p. 249).

Obviously Madame Curie had utterly no hope of ever seeing her beloved husband again. Years before, Marie had abandoned whatever faith she had. Eve writes that her mother “gave her [daughters] no sort of pious education. She felt herself incapable of teaching them dogmas in which she no longer believed: above all she feared for them the distress she had known when she lost her faith” (p. 268).

How very sad. Death is not the end of everything. Rather, it is the beginning. It is the beginning of eternity. May we so bind our families together in service to God that when our parting comes, it will be a “sweet sorrow.” 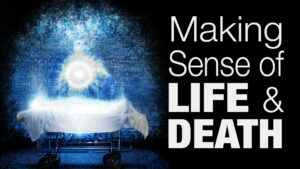 Making Sense of Life and Death