Did the Ancients Base Their Dinosaur Drawings on Fossils?

The presence of antiquated dinosaur carvings, figurines, paintings, etc. around the world leaves no doubt that the ancients knew what dinosaurs looked like long before man began excavating dinosaur bones and reconstructing their skeletons in modern times. Creationists believe that the ancients’ illustrations of dinosaurs serve as one of the proofs (along with the Bible and history; see Lyons, 2001; Lyons, 2007a; Lyons, 2007b) that dinosaurs and humans previously cohabited Earth. Some have suggested, however, that people living hundreds or thousands of years ago may have simply drawn pictures of dinosaurs based upon fossils they found in rocks. Similar to how modern man creates illustrations, recreations, and CGI movies of dinosaurs based upon the fossil record, ancient man supposedly did the same thing. Is this conclusion reasonable in light of the available evidence?

There actually are several lines of reasoning against interpreting the worldwide, antiquated dinosaur carvings as artwork made only from dinosaur fossils. First, unlike dinosaur drawings made in the 21st century, the dinosaur petroglyphs (carvings), pictographs (paintings), and figurines of antiquity are deeply embedded in a historical context of men living with dinosaur-like reptilian creatures often called dragons (see Lyons, 2007a). If there were no stories or references from history of men living and interacting with dinosaurs, the ancient dinosaur artwork would be less impressive testimony for the coexistence of dinosaurs and humans. If the setting of the world thousands of years ago was like today (where men excavate dinosaur bones, reconstruct them, and attempt to draw what they believe the creatures once looked like), then certainly the ancient artwork would be interpreted very differently. However, the historical context of hundreds and thousands of years ago was exactly the opposite of what it is today in reference to dinosaurs. History records how people all over the world told stories of living with “dragons” (i.e., dinosaurs; see Lyons, 2007a).

The evidence [for dragons/dinosaurs—EL] is not confined to works of natural history and literature but appears in everyday chronicles of events…. And such eyewitness accounts are not derived from hearsay or anonymous rumor; they were set down by people of some standing, by kings and knights, monks and archbishops, scholars and saints (Hogarth and Clery, 1979, pp. 13-14).

If this world continues for another 1,000 years, historians in A.D. 3000 should be able to distinguish between humans drawing pictures (or making movies) of dinosaurs in A.D. 2000 (which history would clearly indicate were based on fossil reconstructions and not cohabitation with dinosaurs), and those who made dinosaur art in A.D. 500 (and professed to live with dinosaurs).

Second, we know according to the Bible that only a few thousand years ago, man lived with one animal that had bones “like beams of bronze,” “ribs like bars of iron” (Job 40:18), and that moved its tail “like a cedar” (40:17). Another real dinosaur/dragon-like animal on Earth in Job’s day had “terrible teeth” (41:14), a powerful neck (41:22), and could breathe fire and smoke (41:18-21). What’s more, if God made “the heavens and the earth, the sea, and all that is in them” during the six days of Creation (Exodus 20:11), man obviously lived with dinosaurs, as well as every other animal that has since become extinct. Thus, ancient dinosaur artwork based on living dinosaurs agrees with both history and the Bible.

Third, locating, excavating, reassembling, and illustrating dinosaur fossils is an extremely painstaking, complex, time-consuming process. We know of no evidence of the ancient people around the world excavating dinosaur fossils, reconstructing their skeletons, and then drawing them accurately, as scientists carefully attempt to do in the 21st century. Modern-day illustrations of dinosaurs are not done simply by illustrators going to a fossil bed and drawing what they think the dinosaur looked like. Most of the dinosaur bones discovered around the world are not even articulated (aligned in the same arrangement as in real life). According to James Powell, director of the Los Angeles County Museum of Natural History, “in spite of the intense popular and scientific interest in the dinosaurs and the well-publicized efforts of generations of dinosaur hunters, only about 2,100 articulated dinosaur bones” exist in museums around the world (1998, p. xv, emp. added; see also Dodson, 1990, 87:7608; Lewin, 1990). Scientists have spent billions of dollars over the past 150 years persistently locating and excavating dinosaur fossils, and yet relatively few have been found aligned as they were in life. Furthermore, considering that almost half (45.3%) of all dinosaur genera are based on a single specimen, and 74% are represented by five specimens or less (Dodson, 87:7608), the suggestion that the ancients merely saw dinosaur fossils and drew accurate pictures of these animals seems very unreasonable. Furthermore, as previously stated, the historical context of ancient times is not of men digging up dinosaur bones, imagining what they looked like, and then carving them onto rock; it simply is of men carving what they saw in real life. 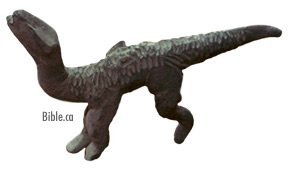 Fourth, ancient dinosaur artwork repeatedly is found surrounded by real-life, extant animals. In the Ta Prohm temple near Siem Reap, Cambodia, the Stegosaurus carving is surrounded by animals still alive today, including monkeys, parrots, swans, and water buffalo. At Natural Bridges National Monument in Utah the Apatosaurus-like dinosaur is near a depiction of a human and a wild goat. At the Havasupai Canyon in northern Arizona, the dinosaur-like artwork is on the same wall with an elephant, a human, and an ibex. On Bishop Bell’s tomb in Carlisle, England, long-neck dinosaurs are engraved next to a bird, a pig, a fish, and a dog. The Ica stones of Peru have many other animals besides dinosaurs on them. Contrast these contexts with how modern dinosaur illustrations depict evolutionary, “scientifically accurate” settings: they show so-called “pre-historic” creatures, and not with humans, monkeys, giraffes, bears, or other large mammals, which supposedly evolved millions of years after dinosaurs became extinct. Once again, ancient dinosaur artwork is repeatedly found in a context of coexistence with humans and extant animals.

Fifth, though scientists since the early to mid-1800s have been excavating dinosaur fossils and attempting to reassemble what they think the dinosaurs looked like, so often they have been wrong in their recreations of these animals (see Potter, 2007). For example, Don Patton noted:

When the bones of Iguanodon were discovered in the early 1800’s, scientists had a very poor idea of their appearance in life. By the late 1800’s [nearly 70 years later—EL] the conception had improved considerably. Now we know much more. For example, ossified tendons in the tail indicate that the tail did not droop but stood out straight (n.d., emp. added). 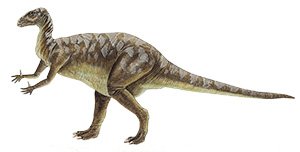 sauropods with dermal spines were depicted in the Ica stone collection. Modern man was unaware that some (many?) sauropod dinosaurs possessed dermal spines, even though scientists had been studying the dinosaur fossils around the world for more than 150 years. This characteristic of sauropods was not learned from the fossil record until 1992. The ancient Peruvians had it right long before 1992: are we to believe they carefully examined, excavated, and reconstructed fossilized sauropod bones and skin—intricate scientific recreations that history simply does not record the ancients performing? Is it not more reasonable to conclude that man once lived with the animals that they illustrated? Modern-day paleontologists have the luxury of researching dinosaur data from all over the world and as far back as the 1820s. Our present knowledge and illustrations of dinosaurs come from their composite research. The ancients had no such comparable science, yet they still depicted dinosaurs accurately. The only logical conclusion is that the ancients actually saw living dinosaurs.

Sixth, although some have supposed that the ancients may have based their illustrations of dinosaurs on the fossil record, even various skeptics have alluded to the improbability of dinosaur art from countries like Peru, Mexico, and England being based on fossils. Evolutionist Adrienne Mayor addressed the figurines from Acambaro, and asked: “Could the reptile figures from Acambaro be amazingly accurate ancient restorations based on observations of dinosaur fossils?” Her answer: “Unlikely: the fossils in the state of Guanajuato belong to Pleistocene mastodons and horses, and not to Mesozoic dinosaurs of 250-65 million years ago” (2005, p. 337). And what about the dinosaurs engraved on the stones from Ica? Could they be based on fossils from around that area? Mayor concluded: “No: the fossil remains of that area are of Oligocene to Pleistocene mammals, with no Cretaceous dinosaur remains” (p. 339). What about the long-neck dinosaur engraved on Bishop Bell’s tomb around A.D. 1500, that even some critics admit looks “more like a quadrupedal dinosaur than any other sort of animal, past or present” (“Bishop Bell’s…,” 2007)? Do skeptics believe Englishmen excavated a long-neck, long-tail dinosaur in the 15th century, without leaving behind any trace or record of their paleontological work, and then had an artist engrave the animal onto Bishop Bell’s tomb? Although skeptics have noted that “[t]his hypothesis…is at least possible,” they admit that it is “whimsical” (“Bishop Bell’s…,” 2007). Whimsical indeed! Statements like these really just show that more people, even evolutionists, are conceding that the ancients knew what dinosaurs looked like.

Seventh, although history does not record the ancients meticulously excavating and reconstructing dinosaur bones, and then accurately drawing how these creatures looked in real life, there are hints throughout history of how prior to modern times people misinterpreted fossils. For example, Dr. Donald DeYoung noted that “in 1677 a large bone was found in England. It was initially attributed to the giant humans described in Genesis 6:4. However, surviving drawings of this bone look similar to a dinosaur femur” (2000, p. 39). Moreover, it has long been thought that the Cyclops legend originated from the Greeks’ discovery of a young, dwarf mammoth skull, which has a nasal cavity in the middle of the skull that the ancients may have mistaken for the creature’s eye socket (cf. “Meet the Original…,” n.d.). No one argues about the ancients’ misinterpretation of various bones and fossils. We simply are curious: where are all of the examples of them accurately finding, identifying, excavating, and reconstructing dinosaur fossils?

Patton, Don (no date), “The Photogallery of the Dinosaur Figurines of Acambaro, Mexico,” [On-line], URL: http://www.bible.ca/tracks/tracks-acambaro-dinos.htm.