The amazing thing from a Christian perspective, however, is that many engineers—the designers of the scientific community—are becoming aware of the fact that the world around us is already replete with fully functional, superior designs in comparison to what the engineering community has been able to develop to date. Biomimicry (i.e., engineering design using something from nature as the blueprint) is becoming a prevalent engineering pursuit. However, some engineers are not interested in copying creation in their designs since they simply cannot replicate many of the features that the natural world has to offer. They are realizing that the created order oftentimes comes equipped with natural “sensor suites” whose designs surpass the capability of engineering knowledge to date. Animals possess amazing detection, tracking, and maneuvering capabilities which are far beyond the knowledge of today’s engineering minds, and likely will be for many decades, if not forever. An insect neurobiologist, John Hildebrand, from the University of Arizona in Tucson, admitted, “There’s a long history of trying to develop microrobots that could be sent out as autonomous devices, but I think many engineers have realised [sic] that they can’t improve on Mother Nature” (Marshall, 2008, p. 41). Of course, “Mother Nature” is not capable of designing anything, since “she” is mindless. The Chief Engineer, the God of the Bible, on the other hand, can be counted on to have the best possible engineering designs. Who, after all, could out-design the Grand Designer? In spite of the deterioration of the world and the entrance of disease and mutations into the created order, after some six millennia, His designs still stand out as the best—unsurpassed by human wisdom.

Recognizing the superiority of the natural world, the scientific community has become interested in learning how to remotely control living creatures instead of developing robotic versions. This line of thinking certainly adds new meaning to God’s command to mankind to “subdue” and “have dominion” over the created order (Genesis 1:28). One of the ways in which animal remote control is being done is by implanting electronics in animal bodies that are subsequently used to manipulate the movements and behaviors of the creature. Hybrid creatures such as these are known as bio-robots or cyborgs. Cyborg research has been conducted since the 1950s, when Jose Delgado of Yale University implanted electrodes into the brains of bulls to stimulate the hypothalamus for control purposes (Marshall, 2008). Since then, the list of remotely controlled animals using electrode implantation has grown to include:

There is beginning to be more interest in the prospect of remotely controlling canines as well (“Grand Challenge…,” 2010). Engineers realize that dogs can traverse a variety of terrains more efficiently than humans or robots and are effective at guarding territories, carrying out search and rescue missions, as well as providing guidance for the visually impaired. They also have an amazing sense of smell that makes them capable of detecting explosives, narcotics, tobacco, pipeline leaks, retail contraband, and even cell phones and bed bugs (“Detection Services,” 2010). Since engineers have not developed a device that can compare with a canine’s ability to detect odors, the use of canines for these applications is attractive. Although other creatures, such as rats (Marshall, 2008), have a keen sense of smell, canines are more appealing, especially due to their innate ability to interact with humans. Thus, using canines for these purposes is attractive to engineers, and the ability to remotely control a canine for many of these purposes is an even more attractive goal. Many scenarios could be envisioned to illustrate cases where the presence of a dog handler alongside a canine could be an impossibility (e.g., tight areas in search and rescue operations) or undesirable (e.g., scenarios where the handler should not be visible or in harm’s way). In a recent event in Afghanistan, a bomb detection canine detected an explosive a moment too late. The canine handler lost his left leg and received other serious injuries (“Grand Challenge…,” 2010). Remote control capability or autonomous guidance likely would have significantly altered the outcome of this unfortunate event, as well as many others.

Since engineers cannot yet develop an adequate robotic solution to this problem, the Office of Naval Research funded a research project to develop such a solution—a research project I was heavily involved in at Auburn University while engaged in doctoral studies. The Canine Detection and Research Institute (CDRI) at Auburn University demonstrated that detection canines can be remotely controlled using a canine vest we developed that was equipped with a tone and vibration generator (Britt, et al., 2010). However, many cases could easily be envisioned where the canine would be out of sight from the handler (e.g., moving behind a distant building), at which time remote control capability becomes useless. Therefore, the next natural step was to automate that remote control capacity (i.e., autonomous control of the canine). 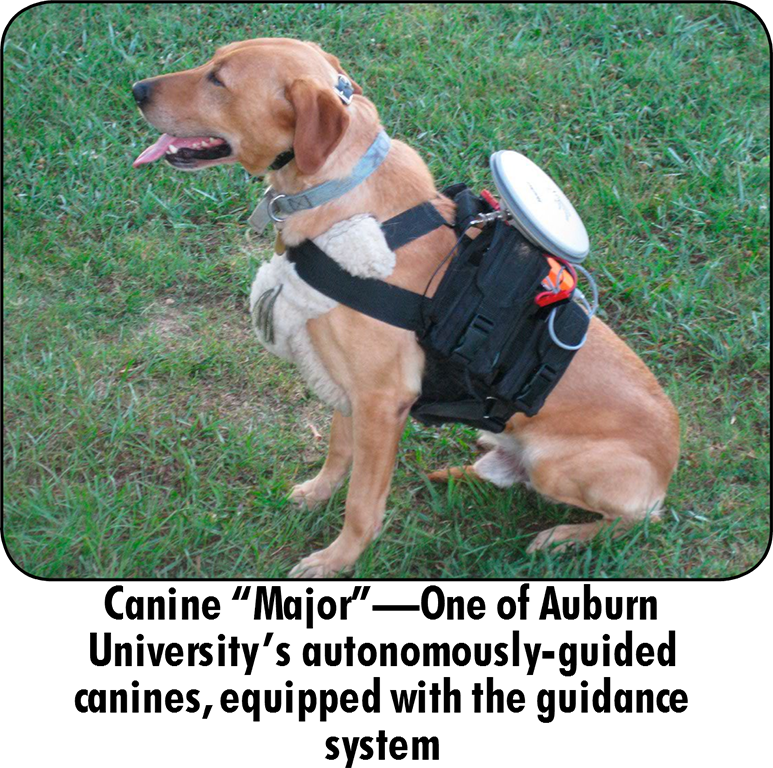 Since canines can traverse a variety of terrains more efficiently than humans, and possess a natural array of “sensors” used to detect and locate items of interest that robots are not readily equipped with, many aspects that pose problems to unmanned ground vehicles are inherently removed with the canine. Canines can execute the low-level decision making that is necessary for rerouting their local path to avoid obstacles or unfavorable terrain. We proved with notable success that canines can be tracked using GPS, inertial sensors, and magnetometers (Miller and Bevly, 2007; Miller and Bevly, 2009a; Miller and Bevly, 2009b), as well as be autonomously guided along desired paths to distant end points (Miller, 2010; Britt, 2009). More important, this system was designed without having to develop the technology that would be required for a complete robotic solution. Instead, a pre-designed creature, already developed by the Chief Engineer, was utilized. In the interest of not plagiarizing Him, I happily reference His incomprehensible work, although, unfortunately I cannot speak for all of my doctoral colleagues.

How ironic that those who are designed, design based on the Designer’s designs, while simultaneously claiming that those designs are not designed. How could mindless rocks, dirt, gas, or slime bring about the amazingly complex designs we see in the World? Personifying inanimate materials such as these with names like “Mother Nature” does nothing but tacitly admit that some Being is in control of the natural order. The frontlines of the engineering community today—bringing about unparalleled technology, more advanced than any society in the history of mankind—cannot come close to replicating the designs around us. Engineers are forced to borrow from God’s design portfolio (oftentimes plagiarizing Him—not giving Him due credit for His designs). What a testament to the greatness of the Chief Engineer’s created order! We may be able to try to fix some of the damage that has been done to the created order due to sin and entropy, but in the words of John Hildebrand, quoted earlier, we certainly “can’t improve on” God’s design. Rather than plagiarizing Him, let all engineers know, “He who built all thingsis God” (Hebrews 3:4, emp. added).

Britt, W. (2009), “A Software and Hardware System for the Autonomous Control and Navigation of a Trained Canine,” Ph.D. Dissertation, Auburn University, Summer.

Miller, J. and D.M. Bevly (2007), “Position and Orientation Determination for a Guided K-9,” Proceedings of the IONGNSS, Ft. Worth, TX.

Miller, J. and D.M. Bevly (2009a), “Determination of Pitch Effects in Guided K-9 Tracking,” Proceedings of the JSDE/IONJNC, Orlando, FL.