For a long time after that, no one understood just how important the Sun and the plants were to the Earth. Today, however, we know that the bright ball in the sky that we call the Sun, and plants all over the globe, work together to make life on the Earth possible. In one way or another, every living organism on the Earth depends on the flow of energy from the Sun. That energy, in the form of sunlight, falls to the Earth, hits plants, and helps them produce things (like food and oxygen) that living creatures (like animals and men) need to exist. But how does all of this work?

Inside the cells of most plants, there are small structures called chloroplasts [KLOR-uh-plahsts]. And inside the chloroplasts, there is a pigment (a substance that can absorb light) known as chlorophyll [KLOR-uh-fil]. When sunlight strikes certain parts of a plant (for example, the leaves), the chlorophyll absorbs the sunlight, which then provides energy for the plant.

Scientists estimate that plants absorb about 50% of the sunlight that hits them. They then use the energy from the trapped sunlight to carry out a process known asphotosynthesis. Although photosynthesis is complicated, here is a simple version of what happens.

When animals and people inhale (breathe in) air that contains oxygen, they exhale (breathe out) a gas known as carbon dioxide. Plants can absorb that carbon dioxide from the air or the soil. Plant cells also contain water. In the chloroplasts, that water is split into hydrogen and oxygen, with some electrons left over. The oxygen that is released from the plant is very important, because it then is inhaled by both animals and humans. Without such oxygen, animals and humans would die. The hydrogen, electrons, and other ingredients are brought together with the carbon dioxide to form a sugar called glucose. This sugar becomes an important source of food energy for animals, humans, and even other plants. So, in any green plant,

carbon dioxide, plus water, plus energy, can make glucose and oxygen.

Could this have “just happened” as a result of evolution? Hardly! The photosynthesis apparatus is so complicated and so well designed that it must have had a designer. You don’t get a poem without a poet; you don’t get a painting without a painter; and you don’t get such beautiful design without a designer. That Designer is God, which is the very point the apostle Paul was trying to make when he wrote in Romans 1:20-21: “For since the creation of the world His invisible attributes are clearly seen, being understood by the things that are made, even His eternal power…, so that they are without excuse.” Paul wanted Christians to know that they couldknow God existed by seeing the beautiful things around them that He had made. Today, when we see the beautiful things around us (like photosynthesis), we, too, can know that God exists. And what an awesome God He is! 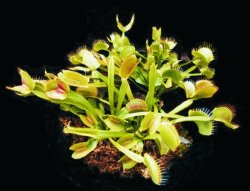 What?! a Meat-Eating Plant?