In several places in Scripture, men of giant stature are mentioned1—men like Goliath, who was “six cubits and a span,” or about nine feet, nine inches tall (1 Samuel 17:4). Are such accounts mere tales worth scoffing at, or is there evidence that humans can grow, and have grown, to enormous heights?

According to evolutionists, giants are not a mythical idea. In a science podcast broadcasted by Cambridge University, well-known paleoanthropologist of the University of Witwatersrand, Lee Berger, was interviewed. Berger discovered the australopithecus sediba2 and homo naledi3 fossils. The podcast group had an opportunity to visit the fossil collection at the University where Berger is a professor for a podcast. While there, they discussed the fossils of the museum. In the article following the interview, editor Chris Smith said, “One of the most interesting things that the fossil record reveals is that we went through a period of extreme giantism. These were people routinely over 7ft tall, they were huge.”4 Berger said, “You’ve probably heard the myth that ancient humans were tiny and some of them were tiny. But, as we moved through the period of 0.5 million to 300,000 years ago in Africa…, [t]hey go through a period of giantism.”5 Berger then proceeded to show the group an example of one of the giant femurs from a species dubbed homo heidelbergensis.6 Berger said, “They are huge. That’s so big we can’t even calculate how big this individual was.”7 Berger admitted that he cannot even gage the actual size of the individual and so surmises him to be over seven feet tall. Smith responded to Berger, asking him if the extreme size could just be an abnormality—an exception to the rule. Berger responded, saying, “No, because we found a lot of them. Everywhere we find them we find them enormous. These are what we call archaic homo sapiens. Some people refer to them as homo heidelbergensis. These individuals are extraordinary. They are giants.”8 Notice first that Berger acknowledges that homo heidelbergensis is definitely human (i.e., homo sapiens), just ancient and enormous. Second, notice that, according to Berger, the fossils are not abnormalities. There was a group of these large humans.

In case homo heidelbergensis is not sufficient evidence, Ralph von Koenigswald of the Netherlands Indies Geological Survey discovered enormous jawbones in 1944. Announcing the discovery,Time magazine ran an article titled “Giants in Those Days,” quoting from Genesis 6:4. According to the article,

Koenigswald first found a big jawbone which looked [human]…but was so massive that he thought it could not possibly be a man’s. Then he found a still larger jaw, the biggest ever discovered, which was unmistakably human…. Koenigswald named it Meganthropus paleojavanicus…. Koenigswald’s crowning find dwarfed even Meganthropus…. [H]e found three astounding teeth. They were six times as big as a modern man’s molars…. Weidenreich [of the American Museum of Natural History] is sure, from the pattern of their “biting surfaces, that they are definitely human.” He has named this man monster…Gigantanthropus. The…giants, Weidenreich thinks, were not freaks. Taking a fresh look at the thick-boned fossils of such other primitive human beings as Heidelberg Man, Weidenreich now believes that “gigantism and massiveness may have been a general or at least widespread character of early mankind.”9

So once again, we have evidence of enormous humans, and not merely “freaks,” but potentially a widespread characteristic of humanity. Humans are definitely capable of enormous size.10

Even today, thousands of years beyond the optimal period of human health and life longevity that characterized the pre-Flood world, humans are capable of immense size. According to Guinness World Records, the tallest man alive today is Sultan Kosen who is eight feet three inches tall.11 His immense height seems to have been caused by a pituitary condition which resulted in an over-production of growth hormone, providing scientific evidence of those genetic characteristics that can contribute to great size. Kosen, however, was short compared to the tallest man from the past who was officially measured: Robert Wadlow—eight feet eleven inches tall, just one inch shy of nine feet tall!12 He weighed in at 491 pounds at one point in his life.

Even evolutionists concede that humans are capable of, and have grown to, immense heights. The giants of the Bible were not mythical beings, but real humans—albeit, big ones.

10 It is possible (even likely) that humans, like plants, reptiles, and insects, were, in fact, larger in the pre-Flood era and for some time afterwards due to the optimized nature of the pre-Flood world. Homo heidelbergensis may be representative of many humans post-Flood. However, when the geologic column and fossil record are telescoped to the biblical timeframe, we realize that most homo species are actually just variety within the human kind, living at roughly the same time with each other. Many of the fossils of larger humans that are being discovered, therefore, are possibly representative of a “race” within the human kind, rather than a species representative of all humans over a long period of time. 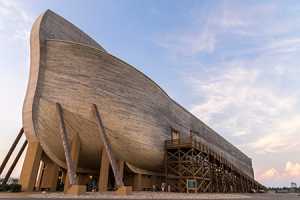 Was the Ark Large Enough for All of the Animals?