I freely admit that I believe a donkey spoke, an iron ax head floated, and a woman turned into a pillar of salt. As certain as I am of my own existence, I am convinced that water flowed from a rock, that a man’s severed ear was immediately reattached with the touch of a hand, and that dead people have come back to life. I believe that not only did a burning bush not really burn up, but also that three men survived a fiery furnace without a single singed hair on their heads. I believe that a man spent three days inside of a sea creature and lived to tell about it.1 And, yes, I believe a virgin gave birth to a Son, Who will one day “descend from heaven with a shout, with the voice of an archangel, and with the trumpet of God. And the dead in Christ will rise first. Then we who are alive and remain shall be caught up together with them in the clouds to meet the Lord in the air. And thus we shall always be with the Lord” (1 Thessalonians 4:16-17).

Atheists, agnostics, and skeptics often ridicule Christians who believe in the various miracles recorded in the Bible. We are said to believe in superstition rather than science and in fairy tales rather than real facts. In reality, Christ was not crazy, and Christianity is not kooky. The Bible is absolutely believable. The whole matter of miracles is really quite simple, and yet profound.

Admittedly, if no supernatural God exists, then (1) the miracles of the Bible are make-believe, (2) the Bible itself is merely a work of fiction, and (3) Christians are very naïve. However, if an omniscient, omnipotent, supernatural Being does exist, then He could work any number of supernatural miracles (which are in harmony with His divine will). If there were no Universe, and He chose to create one, He could speak it into existence (Psalm 33:6-9). If He wanted to put on human flesh and dwell among mankind for a time, the all-powerful Creator could choose to interact with His creation “human”-to-human, face-to-face (John 1:1-3,14). If there were no written revelation from Him to mankind, He could certainly make that happen (2 Peter 1:20-21). He could ensure that writers of His choosing penned what He wanted mankind to know. If He wanted mankind to know that He created the world and everything in it, He could tell them through His divinely inspired writers. If He wanted His human creation to know about some of the miracles He worked through the millennia, again, He could communicate such information through His chosen writers.

In short, (1) if God exists, and (2) if the Bible is His Word, then genuine followers of Christ are not crazy at all. Since the evidence actually indicates that God does exist2 and the Bible is His inspired Word,3 then those who have followed this evidence to its logical conclusion4 have reasonably concluded that the miracles of the Bible make perfect sense.5

In reality, the highly irrational position is atheism. Naturalistic atheism contends that matter came from nothing, yet no such thing has ever been observed to happen naturally. Atheism says that biological life came from non-life, yet science has known for many decades that, in nature, life only comes from pre-existing life. Think about it: Christians are supposedly crazy for believing that a supernatural God could supernaturally cause water to flow from a rock (Exodus 17:1-7), yet atheistic evolution contends that water evolved on Earth from dust and dirt over millions of years, and did so on its own. How is it, exactly, that Christians are the unreasonable ones for believing that the omnipotent God of the Universe once miraculously used a donkey to speak intelligible words to a man (Numbers 22:22-34), when atheistic evolution gets by with peddling the supposed fact that donkeys evolved from fish? If God (Who created Adam’s ear in the beginning) chose to reattach a severed ear of one of Adam’s descendants (Luke 22:50-51), that’s purportedly “preposterous,” but believing that ears just evolved naturally over millions of years (as atheists contend) is supposedly “reasonable.”

In truth, when genuine, biblical Christianity and naturalistic atheism are compared and contrasted, only one proves to be perfectly rational. “Come now, and let us reason together” (Isaiah 1:18). “Speak the words of truth and reason” (Acts 26:25). If God exists and the Bible is His Word, Christianity makes perfect sense. Whether you are an atheist, an agnostic, a skeptic, or even a Christian who is struggling with doubt, why not consider the many evidences which reveal that real Christianity is a reasonable religion? We hope and pray that Apologetics Press can help you in your pursuit of Truth.

3 See Kyle Butt and Eric Lyons (2015), “3 Good Reasons to Believe the Bible is from God,” 35[1]:1-12, www.apologeticspress.org/APContent.aspx?category=13&article=5089&topic=102. See also AP’s book on the inspiration of the Bible, titled Behold! The Word of God (www.apologeticspress.org/store/Product.aspx?pid=8), as well as the “Inspiration of the Bible” section of the AP Web site (/APContent.aspx?category=13).

5 The Bible makes clear that God has worked all manner of miracles in the past, and has the potential to work them at any moment. But, simply because God is more than capable of performing miracles at any time does not mean that He chooses to work such supernatural acts on or though mankind today. In this dispensation, the reason we do not see people miraculously have one of their severed ears reattached, blind people given sight supernaturally, or dead people given new physical life, is not because God cannot do these things. Rather, it is because God has chosen to cease working such supernatural miracles during this time. Just as God has every right to work a miracle, He has every right to suspend the working of miracles on Earth for whatever amount of time He chooses. When the prophet Samuel was a boy, supernatural revelation from God was “rare in those days; there was no widespread revelation” (1 Samuel 3:1). Such rare supernatural revelation from God, however, was not due to a lack of ability on God’s part; rather, it was a choice that He had every right to make.

So why would God choose not to work miracles for a certain period of time, even for hundreds or thousands of years? Unlike magicians, who perform amusing tricks for entertainment purposes, God did not perform miracles for the sake of amusement. Biblical miracles were performed to confirm the Word (cf. Mark 16:20; Hebrews 2:3-4; cf. Exodus 5-12; John 3:2). What’s more, Paul stated that miracles would cease and be done away when the “perfect” (or completed Word of God) had been revealed (1 Corinthians 13:8-10; James 1:25). Once God revealed all of the information that He wished to make available to people, the need for miracles to confirm the oral Word came to an end. Those things that were incomplete and partial (miraculous gifts) would be replaced by the total and complete (the fully revealed, written Word of God). 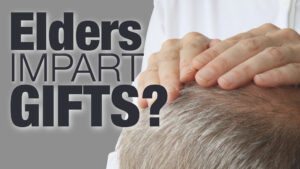