Jesus used many different parables to teach the Gospel. One of those is the parable of the talents, found only in Matthew 25:14-30. In this parable, Jesus told the story of a wealthy man who was getting ready to travel to a far country. Before leaving, the master entrusted his servants with his money. He gave one man five talents, one man two talents, and another man one talent. These talents, however, were not “talents” like we normally think of talents (such as being a good singer or baseball player). In Jesus’ day, a talent was an amount of money. In fact, a talent was a large sum of money; some scholars think one talent of silver was worth well over $1,000!

The master wisely gave the servants what he knew each one could handle. The servant with five talents traded and gained five more; the servant with two talents traded and earned two more. But the man with one talent buried his money in the ground and left it there until the master came back! After a long while, the master returned and asked his servants to explain what they had accomplished with the money he had given them. He was very pleased with the first two, and praised both of them for their good stewardship. On the other hand, the third servant explained that he had decided to bury his money until the master’s return. 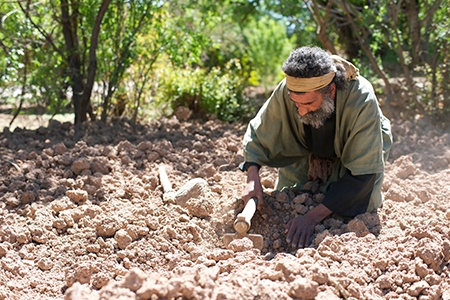 The master called that servant wicked and lazy for not using the money properly. The master then gave the one talent to the first servant, and explained that those who have much will receive even more, while those who have little will lose what they do have. With that, the master charged: “Cast the unprofitable servant into the outer darkness. There will be weeping and gnashing of teeth” (Matthew 25:30).

Jesus used this parable to teach that we cannot be lazy while waiting for the Judgment. If we do not work for the Lord, we will lose what we have and end up with nothing, just like the lazy servant. But if we work hard and remain faithful, we will gain even more, so that when Jesus returns, He will say to us: “Well done, good and faithful servant; enter into the joy of your Lord” (Matthew 25:21,23).