Why would evolutionists want you to believe there is life on other planets?

Why would evolutionists want you to believe there is life on other planets?
­— Joshua Rhinehart, Sutter Creek, CA

Thank you for writing all the way from California. If you read the news much, you might hear people claiming that they have discovered life on other planets, or fossils of life on other planets, or ingredients to make life on other planets. You are smart to wonder why people who don’t believe in creation are trying so hard to convince us that there are other planets with life. You see, if evolution were true (which it isn’t), since our Universe is so big, there should be other planets with life that has evolved. Why would Earth be the only planet out of billions of planets where we find life, and more specifically, human life? People who don’t believe in God or creation have to say that Earth just got lucky. But if that is true, then there should be other “lucky” planets out there with life on them. If evolution were true, we should find life all over the Universe, but we don’t.

Here are some things to remember. First, even if they did find life on another planet, that would not prove evolution is true. Things that are alive are so well-designed, they must have an intelligent designer. Second, there is a very good reason that Earth has life on it. It was not some lucky accident. The Bible explains that God created the Earth for living things to be on it. Isaiah 45:18 says that God “formed the Earth and made it…to be inhabited.” The Earth does not have life because it is lucky; there is life here because that is the way God made it. Thanks for the question, and I’ve told Iggy “hey” for you. 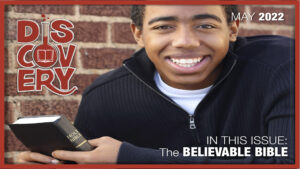