Fulfillment of prophecy Inspiration of the Bible Jesus
From Issue: Discovery 7/1/2019

In the book of Galatians, there is an interesting statement about Jesus Christ. The apostle Paul wrote:“But when the fullness of the time had come, God sent forth His Son” (Galatians 4:4). Today, we know that Jesus was God’s Son, and that He came to save men from their sins (Matthew 1:21). But what did the apostle mean when he said that God sent Jesus “when the fullness of time had come”?

Clearly, the timing of Christ’s arrival was no accident. God sent Jesus to Earth according to a precise plan. As we look back in history, we can see several things that might have made it a good time for Christ to come.

First, Alexander the Great had conquered much of the world, and the Greek language was used, not only in the Mediterranean region, but also in many far-away places. Almost everyone knew Greek, which made communication much easier. Second, the Roman Empire had instituted a universal system of justice and peace. Third, travel had become much easier and more common, thanks to the Romans’ roads. Fourth, Jewish prophets (Isaiah, Jeremiah, Ezekiel, and others) had spent hundreds of years telling the people that a Savior was going to come. Fifth, the Jews had spread out widely into many lands, taking with them their laws and customs, and even had built synagogues as places to gather with friends and to worship. Sixth, the Old Testament Scriptures, which had been written in Aramaic and Hebrew, had been translated into Greek (in a book known as the Septuagint), and were being circulated widely.

But there is something else of importance in explaining why Christ arrived when He did. Hundreds of years earlier, in Genesis 49:10, Jacob had given a prophecy: “The scepter shall not depart from Judah, nor a lawgiver from between his feet, until Shiloh comes.” Let’s examine the content of this important verse.

The word “Shiloh” was recognized by the Jews as another name for the Messiah, Whom God promised to send at some point in the future. This verse, then, explains exactly when the Messiah was to come—when the scepter had departed from Judah. But what was the “scepter,” and when did it depart from Judah? The scepter was a staff kept in the possession of the elders of each of the twelve tribes of Israel, and on which was engraved the name of the tribe. It symbolized the rights and powers of God’s people. As long as the elders had the scepter, the Jews not only could govern themselves, but could even administer the death penalty.

So, according to Jacob’s prophecy, Christ was promised to come before “the scepter” departed from Judah, which meant that Christ had to come prior to the Jews’ losing their national rights and powers. When did the Jews lose those rights and powers? In A.D. 6, when a man named Coponius was installed by the Roman emperor as the first procurator (agent of the Roman emperor) of Judea, he took away the Jews’ power to administer the death penalty. When that occurred, even first-century Jews recognized the departure of the scepter. When the members of the Sanhedrin (the Jewish council of rulers) found that they could not put Jesus to death themselves, but instead had to ask Pontius Pilate, the Roman procurator in A.D. 30, to do so on their behalf (Luke 23:24), they should have known that the Messiah was in their midst, for that was Jacob’s prophecy. One Jewish teacher, rabbi Rachmon, said: “When the members of the Sanhedrin found themselves deprived of their right over life and death, a general consternation took possession of them; they covered their heads with ashes, and their bodies with sackcloth, exclaiming: ‘Woe unto us, for the scepter has departed from Judah, and the Messiah has not come.’” 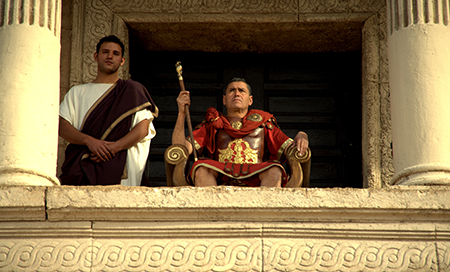 The scepter had indeed departed from Judah, and the Messiah had indeed come. “When the fullness of time had come, God sent forth His Son.” Jesus came to a world where “all have sinned and fall short of the glory of God” (Romans 3:23), and where “the wages of sin is death” (Romans 6:23). But He offered salvation and said: “Be of good cheer, I have overcome the world” (John 16:33). He wanted people to know that “the gift of God is eternal life in Christ Jesus our Lord” (Romans 6:23).

Yet the Jews ignored Jacob’s prophecy as recorded in God’s Word, and demanded that the Romans kill Christ. How sad—that the people of Jesus’ day should be so blind to the eternal truths found within God’s Word. Let us not be as blind as those first-century Jews were.