What Killed the Dinosaurs?

In the August issue of Discovery last year, I told you about the field trip that Noah and I took to the Grand Canyon. The other trip we took last summer was to Wyoming to study dinosaur fossils. Archaeologist Dewayne Bryant and NASA scientist Dr. Mike Houts also came to help. We excavated (dug up) and studied fossils with the geologist who is perhaps the leading dinosaur fossil expert among creationists: Dr. Art Chadwick. His team has excavated more than 18,000 dinosaur fossils, including lots of Tyrannosaurus, Nanotyranus, Pachycephalosaurus, Edmontosaurus, and Triceratops fossils. Each summer his team travels to Newcastle, WY, sets up tents, and camps out for a few weeks in the stormy, windy grasslands of the northwest U.S. where there are abundant fossils of the dinosaur species that were most likely the last to die in the Flood.

The big question which everybody wants to answer about the dinosaurs is what happened to them? Bible believers, of course, suggest that many of them were killed in the Flood, with a few representatives surviving on the Ark, only to finally die off later (possibly from being hunted or starving from lack of enough post-Flood vegetation to support their size). Since we find dinosaurs in the geologic strata (the rock layers in the ground) that we are confident were laid down during the Flood, we know that dinosaurs were still around at the time of the Flood. And since Noah took representatives of “every beast” on the Ark (Genesis 7:13-14), we know dinosaurs would have been on the Ark (though probably young representatives). But how do we determine if most of the dinosaurs died in the Flood? That is what we were studying with Dr. Chadwick.

On the ranch where we were digging, there are five different fossil quarries (places where fossils are dug up) being excavated, and hundreds of fossils are carefully unearthed, documented with pictures and GPS, glued, and cast every year. Based on the thousands of fossils that have already been discovered, Dr. Chadwick believes that there are possibly as many as 15,000 dinosaurs represented in one layer of sediment in the bonebed. That is excellent evidence that something catastrophic killed the dinosaurs, just like we would predict if the Flood happened. 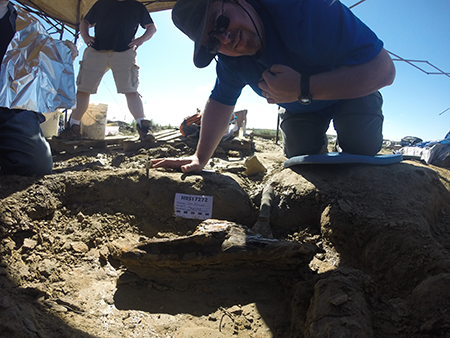 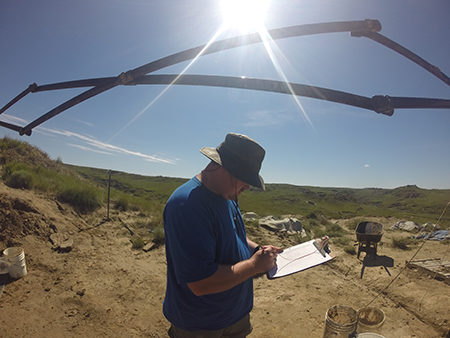 Many secular geologists (who do not believe in the biblical Flood) admit that the dinosaurs were killed and buried by water activity and even by catastrophe. They often conclude, however, that the dinosaurs died while trying to cross a river during flood season, and their corpses were washed down to a river bend where they piled up year after year. They say this would explain why there are so many fossils in one place. This explaination has problems. First, the fossils on the ranch were not found oriented (lined up) in the way they should have been if they were laid down by a river. They are randomly oriented. Further, they are not piled up, as though at a river bend. They are randomly distributed (spread out) over the entire area. The bones are also disarticulated (DIS-are-TICK-you-late-ed). In other words, the whole, intact dinosaur is not found in the area they are studying. Instead, the bones are separated—isolated from each other. If corpses were piling up on a river bend and being buried rapidly in order to preserve them for fossilization, you would expect that at least some of the remains would be articulated—that you would find partial skeletons. That is not what is found on the ranch. Second, if the corpses were being piled up, year after year, we would expect there to be separate layers of dinosaurs for each flood event, with the remains of each flood’s dinosaurs together in one layer. Again, that is not what we find. Instead of multiple layers of dinosaur fossils, the dinosaur fossils in the area are in one layer: a single graded bed, with large bones at the bottom and smaller bones higher up. That means that a single, rapid, catastrophic event was responsible for the burial of the thousands of dinosaurs in the area, just like we would predict if the Flood killed them.