What is the Jewish Talmud?

“Why do you also transgress the commandment of God because of your tradition? For God commanded, saying, ‘Honor your father and your mother’; and, ‘He who curses father or mother, let him be put to death.’ But you say, ‘Whoever says to his father or mother, “Whatever profit you might have received from me is a gift to God”—’then he need not honor his father or mother.’ Thus you have made the commandment of God of no effect by your tradition. Hypocrites! Well did Isaiah prophesy about you, saying: ‘These people draw near to me with their mouth, and honor Me with their lips, but their heart is far from Me, teaching as doctrine the traditions of men’ ” (Matthew 15:3-9).

In interpreting the Law of Moses, the Pharisees overstepped their bounds by inserting the traditions of their fathers in place of God’s holy law, and were summarily condemned by the Lord for their actions. Though Jesus preached against this Pharisaical traditionalism throughout His earthly ministry, the Judaism practiced today is based almost exclusively upon it. What Jesus called the “traditions of men” is now known as “rabbinicalism,” and is grounded firmly in the extrabiblical writings of the Talmud.

The Jews believe that two laws were given to Moses—the written and the oral. Both were given to Moses by God at Sinai: the written was engraved on stone tablets, and penned by Moses shortly before his death (Deuteronomy 31:9-13), while the oral was revealed in the conversation between God and the great Lawgiver on the mountain. This second body of law was passed from Moses to Joshua, from Joshua to the Israelite elders, and then from generation to generation as the ages passed. Each generation of teachers “expanded” on this law, which eventually became quite extensive, and added much unnecessary legislation to God’s already adequate laws. It was this orally transmitted law that was advanced and defended by many of the Pharisees of Jesus’ day (Matthew 15:1-2), and then used in their attempts to restrict Him from certain activities on the Sabbath (Mark 3:1-6). The Jews found justification for the oral law in Exodus 20:1 (“And God spoke all these words…”), although this interpretation of the passage is contrived at best.

After the destruction of Jerusalem and the Bar-Kokhba rebellion in the first century A.D., the rabbis who were familiar with the oral law were few in number, and it was feared that there would not be enough Jews left to pass on the great traditions. To remedy this potential problem, Rabbi Judah the Prince set out to organize and record the oral law into a formal body of written law in A.D. 166 (Telushkin, 1991). The oral law, now called the Mishna, was methodically organized. Formerly, if a question arose about the Sabbath, a search would be made in all five books of the Torah (the first five books of the Old Testament), and scattered references would be collected. This was time-consuming and impractical during the time when books were rare, and so Rabbi Judah organized and grouped all related passages into topical sections, along with the interpretations, opinions, and precedents that characterized the oral traditions. Thus the Mishnah, the codified oral law, consists of 63 “tractates” relating to every aspect of Jewish life.

To illustrate the differences in the two types of law, contrast these passages from the Torah and the Mishna. The Torah declares: “Ye shall kindle no fire throughout your habitations upon the Sabbath day.” This was practiced in a literal fashion for centuries (with the Jews probably sitting around in the cold and dark from Friday night until Saturday evening), until the scribes and Pharisees came along with their new interpretation. These learned men declared that it was acceptable to have lights on the Sabbath, so long as they were kindled before the Sabbath began, and not touched until after the Sabbath ended. This interpretation led to all sorts of little regulations to guard people from accidentally touching the lamp on the Sabbath. One of these was the Mishna regulation “one shall not read by the lamplight”—the reason being, if one were reading by the lamp, one might be tempted to adjust the light, and thereby violate the original commandment (see Browne, 1933, pp. 181ff.).

As the Jewish teachers continued to study and debate the fine points of the Mishna, a body of scholarly commentary grew, which subsequently was called the Gemara. This commentary was combined with the Mishna, and referred to as the Talmud. There are two works that fall under this appellation, labeled by their place of origin: the Babylonian Talmud, and the Jerusalem Talmud. The latter is less intact, and was completed c. A.D. 350, while the former and more respected of the two was completed c. A.D. 550. Today, only one manuscript survives: the Munish manuscript of 1342. These books are of tremendous size, comprising about 6,000 pages in today’s modern print. Alfred Edersheim, noted Jewish scholar, defined the Talmud in this way:

If we imagine something combining law reports, a Rabbinical “Hansard,” and notes of a theological debating club—all thoroughly Oriental, full of digressions, anecdotes, quaint sayings, fancies, legends, and too often of what, from its profanity, superstition, and even obscenity, could scarcely be quoted, we may form some general idea of what the Talmud is (1972, p. 103).

The Talmud is intended to do more than simply restate the law; the material is meant to connect the laws to everyday life, and to give practical instruction. The Talmud presents the opinions of the scholars, and presents their debates over each topic, no matter how mundane or inane. Its purpose was to complement the Torah, but it came to supplement (if not displace) it. Note the tediousness and absurdity of the following rabbinic debate:

Rabbah [a Babylonian scholar] said [that one should not read by the lamplight] even if it be placed [far out of reach, say] the height from the ground of two men, or two stories, or even on top of ten houses, one above the other.

[That is] “one may not read.” But it does not say two may not read together, [for then one can guard the other against snuffing the wick]. Against this supposition, however, there is a tradition that “neither one nor two together” [may read].

Said Rabbi Elazar: “There is no contradiction here. The Mishna allows [two people to read together] so long as they read the same subject. But the tradition [forbids it only if] they are reading different subjects…” (Browne, 1933, pp. 182-183, emp. in orig.).

Such Socratic, rambling dialogue is common in the Talmud, and many examples could be cited. Strong and McClintock remarked:

Abounding, moreover, in fantastic trifles and Rabbinical reveries, it must appear almost incredible that any sane man could exhibit such acumen and such ardor in the invention of those unintelligible comments, in those nice scrupulosities, and those ludicrous chimeras which the rabbins have solemnly published to the world… (1970, 10:168).

Underlying the Talmud is the assumption of the perfection of the Mishna, giving this book of human origin a sanctity almost equal to that of the Bible (Douglas, 1991, p. 808). This became necessary for the survival of Judaism after the fall of Jerusalem in A.D. 70, since much of the Old Law revolved around the Temple. After the House of God was destroyed and the Jews scattered, Judaism essentially had to be rewritten. Observe in this excerpt the great respect given to the traditions, compared to the law in the Talmud:

The spirit of the Talmudic process is expressed in a tale in tractate Baba Meziah. Rabbi Eliezer, a proponent of unchanging tradition—“a well-lined cistern that doesnt lose a drop,” as his teacher characterized him—was engaged in a legal disputation with his colleagues. “He brought all the reasons in the world,” but the majority would not accept his view. Said Rabbi Eliezer, “If the law is as I hold it to be, let this tree prove it,” and the tree uprooted itself a hundred amma, but they said, “Proof cannot be brought from a tree.” Rabbi Eliezer persisted, saying, “Let these waters determine it,” and the waters began to flow backwards, but his colleagues responded that waters cannot determine the law. Once again Rabbi Eliezer tried, asking the walls of the study house to support him. They began to totter, whereupon the spokesman for the majority, Rabbi Joshua, admonished them, “when rabbis are engaged in legal discussion what right have ye to interfere!” So the walls did not fall in respect for Rabbi Joshua, nor did they return to their upright position, in respect for Rabbi Eliezer-and “they remain thus to this day!” But Rabbi Eliezer would not surrender and cried out: “Let Heaven decide.” A voice was heard from Heaven saying: “Why do ye dispute with Rabbi Eliezer; the law is always as he says it to be.” Whereupon Rabbi Joshua arose and proclaimed, quoting Scripture, “It is not in Heaven!” Rabbi Jeremiah explained, “The Law was given at Sinai and we no longer give heed to heavenly voices, for in that Law it is stated: ‘One follows the majority.’ ” God’s truth, divine law, is not determined by miracles or heavenly voices, but by the collegium of rabbis, men learned in the law, committed to the law and expert in its application to the life of the pious community (“The Talmud,” 2003).

Despite the tedious legalese illustrated above, the Talmud does offer pieces of wisdom and learning. “Be thou the cursed, not he who curses.” “The soldiers fight, and the kings are called the heroes.” “The passions are not all evil, for were it not for them, no one would build a house, marry a wife, beget children, or do any work.” One third of the book consists of “clever fables and quaint legends and amusing proverbs” like those mentioned above, and is the essential source for all Jewish culture.

Today, Jews accept the Talmud in many different ways. An old joke says that if you put ten Jews in a room together you’ll get eleven different opinions on it. The Orthodox Jews basically accept the Talmud as authoritative, while the more liberal Reformed Jews reject most of the legislation. Conservatives fall somewhere in between. Nonetheless, it is accepted by all Jews as an important body of tradition and lore.

The Christian can learn a great lesson from this discussion about the dangers of adding to God’s Word. In the case of the Jews, what began as small footnotes to the Word became a body of literature all its own—a body that now possess as much authority in some minds as the written law of God. While there is always a place for scholarly examination and reference in personal Bible study, we must be careful never to accept “as doctrine the commandments of men.”

[The Talmud can be found on-line at http://www.sacred-texts.com/jud/talmud.htm]

Edersheim, Alfred (1972), The Life and Times of Jesus the Messiah (Grand Rapids: Eerdmans). 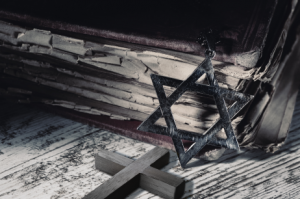 What is Messianic Judaism?

Antisemitism and the Crucifixion of Christ: Who Murdered Jesus?