What Happened in the Flood?

I remember thinking about the Flood as a child. I pictured rain coming down, and the Flood rising for 40 days, but is that all that the Bible and science tell us happened? Having more details can help us understand what we see when we study nature and also prepare us to defend the Bible.

It is true that the Bible does not give us many hints about what happened in the Flood, but it does give us more than we might have first thought. For example:

Genesis 7:11—All of the fountains of the great deep were broken up. Apparently the ocean floor broke up and began moving around as it does today—only much faster during the Flood.

Genesis 7:11—Apparently, after the fountains of the deep broke up, the “windows of heaven” opened for 40 days and nights (7:12). It is possible that the breakup of the fountains caused the rain.

Genesis 7:17-18,24—While intense rain continued for 40 days and nights, the water “prevailed on the Earth” for about five months—possibly continuing to increase the entire time (8:3).

Psalm 104:6-9 (ESV)—During the Flood, Earth’s great mountains rose and the valleys sank. That means that before the Flood, the Earth was flatter—making it easier for the Flood waters to cover the entire Earth.

Psalm 104:9—The changes that occurred on the surface of the Earth meant that a Flood like that of Noah’s day cannot ever happen again naturally. We will consider this idea more in our last section of this issue.

Genesis 8:1-3—When the fountains were stopped and the windows of heaven closed, God also caused a wind to pass over the Earth. So the water began to decrease. After se veral weeks, the Ark rested in a mountain range.

Amazingly, Creation scientists have discovered lots of evidence that supports what these passages say happened during the Flood. They have found many other evidences to help fill in the gaps. For example, they have found that when the ocean floor broke into many pieces (Genesis 7:11)—called plates—the plates would have begun to move quickly. Some plates would have moved apart, while others smashed into each other, causing one plate to be pushed downward (“subducted”), under the other plate, and towards the center of the Earth. That process creates mountains (Psalm 104:8). Since the mountains rose during the Flood, there is no longer enough water on Earth to cover them all, just as the Bible says in Psalm 104:9. 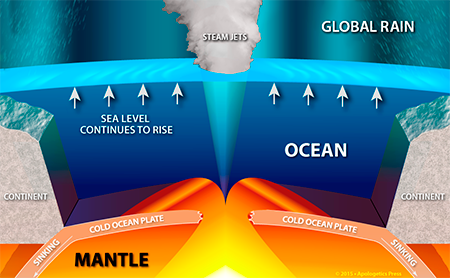 We live on the “ground”—what geologists call the Earth’s crust. Under the crust, however, is the mantle. Scientists have discovered huge piles of rock in the mantle under the places where plates subducted that are too cold to be millions of years old. Those plates were most likely pushed into the mantle rapidly only a few thousand years ago in the Flood—when Earth’s great mountains were forming rapidly.

The mantle is filled with magma—rock that is so hot that it is melted like rocky syrup. Plates that move apart leave gaps. Magma comes to the surface to fill in those gaps. Have you ever thrown water on a camp fire? When you do, much of the water is heated so hot that it turns from a liquid into a vapor called steam. When the magma touched the ocean water in the flood, the water would have turned to a vapor, too. Hundreds of miles of steam fountains (Genesis 7:11) would have been created all over the Earth in the Flood, which would have shot into the atmosphere and dropped down as rain—possibly the rain that came down for 40 days and nights (7:17-18).

As usual, there is no reason ever to doubt the Bible. If the Bible says a global Flood happened, then you can trust that it did. As scientific evidence is gathered, it will support what the Bible says every time. Psalm 111:2—“The works of the Lord are great; studied by all who have pleasure in them.”