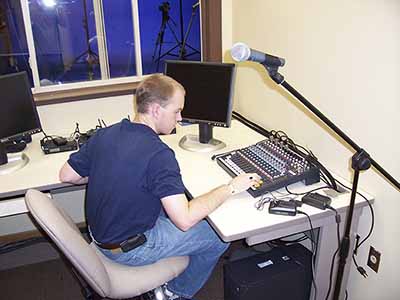 Excitement fills the air here at the Apologetics Press offices as we begin filming our newest episode of Digger Doug’s Underground—in our very own studio. About two and a half years ago, Gospel Broadcasting Network approached us about the possibility of producing a television program on Christian Evidences for children. Historically, A.P. has been intricately involved in the production of children’s resources and materials, but we had never done any children’s programming. To make a long story short, with some help, we were able to purchase top-of-the-line professional costumes (on a par with Barney), and start filming here in Montgomery at a local TV station. We soon learned, however, that it took about eight hours of filming to produce a 30 minute show. At $150 an hour for filming (not including comparable editing costs), it simply was not financially feasible. We then began to look for more cost-effective methods of production. 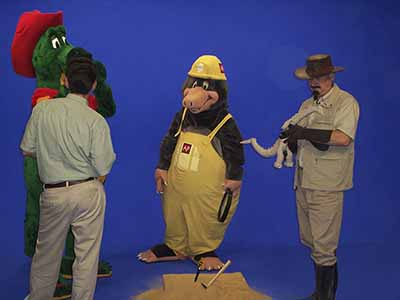 Last October, the gracious brethren at GBN allowed us to use their studio and editing personnel to produce the first seven episodes of Digger Doug’s Underground. By using their studio and equipment, we were able to increase productivity, but there were some drawbacks. As could be expected, GBN’s workload continued to increase as they endeavored to provide 24-7 programming. Furthermore, the trip to Chattanooga (where their studio is located) required at least four A.P. personnel to drive several hundred miles and spend several days and nights.

For these and other reasons, we determined that the best scenario would be to create a studio in our offices at Apologetics Press. A large room on the second floor that previously had been used for storage provided the perfect dimensions for a studio. We contacted Broadview Media, a production consulting firm, to ascertain the feasibility and cost involved in acquiring equipment such as lights, microphones, cameras, etc., that would be necessary to produce the show in our offices. They supplied us with all the pertinent information, and a detailed list of the equipment needed. The estimated cost for the studio was $35,000.

In April of this year, we began a concentrated effort to raise the needed funds to make the studio a reality. We sent letters, visited elderships, talked to supporters, made phone calls, and prayed fervently for the effort. Now, only seven months later, through the generous support of about 20 individuals and congregations, we have a fully functional, state-of-the-art television studio.

Not only will we be able to produce episodes of Digger Doug’s Underground at a greatly accelerated rate, but we also will be able to begin producing various other multimedia products such as creation/evolution DVDs for use in adult and teen Bible classes.

Our mission is to teach about God, His Word, and His wonderful power as seen in His marvelous creation (Psalm 19:1). Digger Doug’s Underground and our new studio provide effective tools to fulfill that mission. Thank you so much for your support, generous contributions, and prayers. To God be the glory.