In the minds of some, public debates are not profitable events. They feel that debates are negative and only create wrangling and backbiting. While it is certainly true that debates can devolve into unprofitable displays, when properly conducted, a debate can be an extremely valuable force for the advancement of truth. Jesus certainly utilized public, oral disputation on numerous occasions (e.g., John 8:13-59), as did a host of God’s human representatives. Public debate enables attendees to see two opposing viewpoints contrasted with each other in such a way that the audience can see the strengths or weaknesses of each position so that the truth may be recognized. 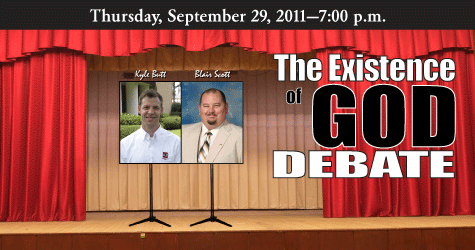 We at A.P. do not go out of our way to pick fights; but we are genuinely attempting to take seriously the admonition of Paul to the Philippians, that we are “put here for the defense of the gospel” (1:16). Recall the words of Paul to all Christians:

The “rulers of the darkness of this age” and the “spiritual hosts of wickedness” are rampant in our day. If we love people and do not want to see them consigned to an eternity of unquenchable fire (Mark 9:43), and if we love God and desire to fulfill His expectations of us, we must be willing to act when circumstances are presented to us that necessitate a spiritual response. Hence, on Thursday, September 29, at 7:00 p.m., Kyle Butt will engage atheist Blair Scott in public debate on the campus of the University of North Alabama (UNA) in Florence. Scott is the Director of Communications for the American Atheist organization, having received the American Atheist of the Year award in 2007 and again in 2010. The proposition for the debate is: “God Does Not Exist.” Mr. Scott will affirm that God does not exist, while Kyle will deny that affirmation.

The UNA Norton Auditorium will seat some 1,500 people. Admission is free. We hope you will be able to attend the debate. Here is an excellent opportunity to bring glory to the Creator of the Universe, and in the process, to strengthen the resolve of those who believe in God while urging reconsideration of the issues for those who do not. Please pray for the success of this event and make your plans to be a part of it.