Design in the Universe Earth
From Issue: Discovery 10/1/2016

Did you know that some people live in areas of the world where, during a certain season,they have daylight 24 hours a day, and during the opposite season, they have darkness 24 hours a day? For example, if you lived in Barrow, Alaska you would never see the Sun rise or set in June. Why? Because the Sun is always visible during that part of summer. In fact, once Alaskans in Barrow see the Sun rise in May, they do not see it set until August. (How cool is that!)

The winter time in Barrow is quite a different story, however. Though there are times during the winter month of January when it is “less dark,” it is dark (or at least “fairly dark”) 24-7, because the Sun is never visible. Why does this change happen? It all has to do with the way God designed the Earth, its tilt, and its revolution around the Sun. God made the Earth to follow an egg-shaped path around the Sun, while the Earth is tilted at 23½ degrees. (By the way, this tilt of Earth’s axis never varies;  it is alwaysthe same. Doesn’t that sound like design?)

In the summer months, the northern hemisphere (a word that means “half of the globe”) is tilted closer to the Sun and receives more direct sunrays. On the other hand, the southern hemisphere is tilted away from the Sun during June, July, and August and receives slanted sunrays. (Both the length of days and the angle of the Sun’s rays cause the different seasons.) Thus, in the summer time in Barrow, Alaskans have longer and warmer days than at other times during the year, while in New Zealand (which is in the southern hemisphere), people experience shorter and cooler days during June, July, and August. 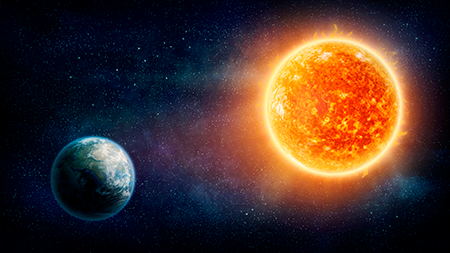 After the worldwide Flood of Noah’s day, God not only promised never to destroy the Earth again with water, He also promised, “While the earth remains, seedtime and harvest, cold and heat, winter and summer, and day and night shall not cease” (Genesis 8:22). In short, by the power and grace of God we have “fruitful seasons, filling our hearts with food and gladness” (Acts 14:17). Let’s be thankful for the change of seasons. (Personally, I’m especially thankful for summer and fall—my two favorite seasons!)