It has a brain, a heart, a beak, a tongue, two eyes, two wings, two legs, eight toes, and roughly 1,000 feathers, as well as many other bones and body parts. Known as Zunzun in Cuba (the bird’s only known natural habitat), the Bee Hummingbird is packed full of wonderfully designed, lightweight structures—all in a body that weighs less than a penny.

The Bee Hummingbird is the smallest bird in the world at only two inches long (from beak to tail) and weighing less than .07 ounces. Since it hovers in the air while feeding on the nectar of flowers and is only ½-inch longer than certain bees, at first glance it is sometimes mistaken for a bee.

Bee Hummingbirds build small nests (about one inch in diameter) and lay eggs smaller than acoffee bean (less than .01 ounce). The egg of a Bee Hummingbird is 4,500 times lighter than an ostrich egg.

The Bee Hummingbird may be small, but it can put away the “groceries” (in the form of nectar and tiny insects). Everyday these tiny birds eat about half of their bodyweight in food, and drink several times their bodyweight in water. That is comparable to an 80-pound child eating 40 pounds of food and drinking about 75 gallons of water every day.

Why does this little bird need so much food and water? Because it needs a lot of energy. And why does it need so much energy? Because Bee Hummingbirds flap their wings in flight anywhere from 80-200 times per second. 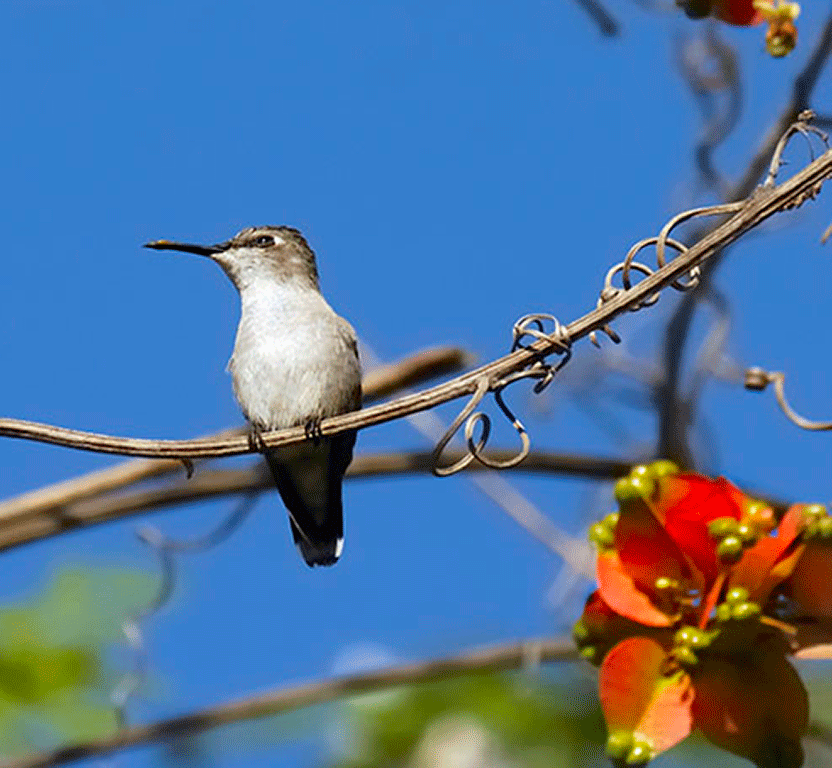 The flight of hummingbirds is unlike any other bird. God created these amazingly fast-flying, zigzagging animals with the ability to move their wings so fast, and in such a specially designed, figure-eight motion, that they are the only birds in the world that can fly sideways and backwards, as well as up and down, all the while keeping their body in virtually the same position. They are the hovering helicopters of the bird world.

Some people say that evolution must have brought about the Bee Hummingbird. Yet, this could no more happen than a tornado could sweep through a junkyard and create a perfectly functional helicopter. Hovering hummingbirds did not evolve their unique, helicopter-like abilities from earlier airplane-like birds, which had neither the anatomy nor the ability to hover like a helicopter. Hummingbirds were specially created by God on day five of Creation.