The Wrong Way to Deal with the Problem of Pain and Suffering: A Brief Critique of Harold Kushner’s Answer to Evil

In 1981, Jewish Rabbi Harold Kushner published a book titled When Bad Things Happen to Good People. The purpose of the book was to attempt to make sense of the pain and suffering that everyday people experience on a regular basis. He wrote the book as an outlet to help alleviate his struggle with the problem of evil. He explains in the beginning of the book that it was written in memory of his son Aaron Zev Kushner. Aaron was born with a very rare disease known as progeria or rapid aging disease. He died at the age of 14. Harold Kushner explains that Aaron’s sickness and death caused him to “rethink everything that he had been taught about God and God’s ways” (1981, p. 1). This “rethinking” process led Kushner to become one of the most prominent adherents to the belief that God is not all-powerful and that God cannot alleviate human pain and suffering even if He wanted to. He summarizes this view in several statements. Near the end of the book, when talking about sickness, he states: “God can’t make it go away. That is something which is too hard even for God” (p. 129). In dealing with the laws of gravity, storms, and earthquakes, he demands that God does not cause these things to happen, and that “God cannot stop” them (p. 58). Kushner opines that “God wants the righteous to live peaceful, happy lives, but sometimes even He can’t bring that about. It is too difficult even for God to keep cruelty and chaos from claiming their innocent victims” (p. 43).

I’m writing this critique for two primary reasons. First, it is extremely dangerous on a spiritual level to say things about God, or accept ideas about God, that are not true. Second, Kushner’s book was a national bestseller, and many people have adopted some form of his thinking, which is most likely due to the fact that Kushner has some good things to say. But the overriding thesis that God is too weak to deal with the pain and suffering in the world is lacking on a number of levels.

First, it goes against very clearly written biblical statements that insist that God is all-powerful. Genesis 17:1 explains that God said to Abraham, “I am Almighty God.” When the angel of the Lord speaks to Abraham, he asks the rhetorical question, “Is anything too hard for the Lord?” (Genesis 18:14). The obvious understood answer is “No,” not even circumventing the natural laws and arranging for the aged Abraham and Sarah to have a son. Job recognized God’s omnipotence when he said to God, “I know that you can do everything, that that no purpose of Yours can be willheld from You” (Job 42:2). Are we to believe that God brings the world into existence from nothing, by merely speaking it into existence (Hebrews 11:3), and that He upholds the entire Universe “by the word of His power” (Hebrews 1:3), but somehow He does not have the ability, power, or strength to cure the common cold? Such a premise is untenable.

A second major problem with Kushner’s thesis is that he refuses to accept the whole biblical explanation. Instead, he insists that any answer to the problem of evil must find a solution in the present, physical world. He does not admit into the discussion that eternity is sure and all wrongs will be made right at the end of time (Revelation 20:11-15). Instead, he demands that any answer to suffering that does not vindicate the righteous in this life is inadequate.  When discussing life after death, Kushner says, “Neither I nor any other living person can know anything about the reality of that hope” (p. 28). He says he does believe that some part of a human’s spiritual being will survive after physical death, but he concludes, “since we cannot know for sure, we would be well advised to take this world as seriously as we can, in case it turns out to be the only one we will ever have, and to look for meaning and justice here” (p. 29). It is no wonder then that Kushner’s picture of God is so skewed, since he completely dismisses one of the most important answers that God Himself gives—that the next life will complete the eternal plan of justice and meaning. Since Kushner is a Jewish Rabbi, he dismisses the New Testament as the inspired Word of God and Jesus as God in the flesh; therefore, his thesis is crippled by a lack of understanding about the life to come. Jesus’ solemn promise in John 14:1-4 effectively derails Kushner’s thesis single-handedly. Let us be reminded of the words of the Lord, when He said: “Let not your heart be troubled, you believe in God, believe also in Me. In My Father’s house are many mansions; if it were not so, I would have told you. I go to prepare a place for you. And if I go to prepare a place for you, I will come again and receive you to Myself; that where I am, there you may be also.” Any answer to the problem of evil and suffering that does not factor in the surety of an afterlife cannot be accurate or sufficient.

Finally, another reason that Kushner’s thesis is inadequate and unnecessary is that reasonable solutions to the problem of evil and suffering have been put forth that do answer the issue and still maintain that God is all-powerful and all-loving. Thomas B. Warren’s book Have Atheists Proved There is No God? is one such work. Dave Miller’s book  Why People Suffer offers an excellent summary of such arguments as well. It is simply not the case, as Kushner suggests, that a “rethinking” of all that has been taught or discussed on the subject is needed.

To those who understand God’s perfection and omnipotence, Kushner’s conclusion is nothing short of blasphemous. On the final page of the book, he says: “Are you capable of forgiving and loving God even when you have found out that He is not perfect…? Can you learn to love and forgive Him despite His limitations…as you once learned to forgive and love your parents even though they were not as wise, as strong, or as perfect as you needed them to be?” (p. 148). When reading Kushner’s conclusion, we are reminded of God’s anger against Job’s three friends. He told Job to deliver this message to Eliphaz the Temanite: “My wrath is aroused against you and your two friends, for you have not spoken of Me what is right, as My servant Job has” (Job 42:7). We can only imagine and conclude that such a response from God would be directed against Kushner as well.

Where Was God During Hurricane Florence? 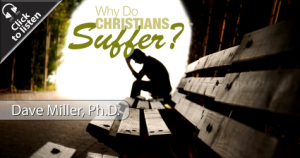