The Puzzling Platypus is No Product of Evolution 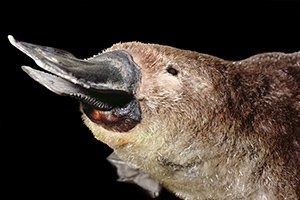 Scientists classify the platypus as a mammal, yet it is unlike any other mammal youhave ever seen. It is about the size of a house cat with fur thicker than a polar bear’s. It can store food in its mouth like a chipmunk. It has a beaver-like tail and webbed feet like an otter. It has a bill like a duck and spurs like a rooster. What’s more, it lays eggs like a turtle and produces venom like a snake. If there was ever an animal to call “unique,” it would be the platypus.

Platypuses show every indication of being designed by the grand Designer.

Like so many animals that scientists study, the more scientists learn about the platypus, the more amazed they are with this curious creature. Although evolutionists would have us believe that this unique animal is the product of many millions of years of evolution, in reality, the duck-billed platypus declares the glory of God.

“You are worthy, O Lord, to receive glory and honor and power; for You created all things, and by Your will they exist and were created” (Revelation 4:11).