The Jackhammer in Your Backyard

Creation vs. Evolution Existence of God
From Issue: R&R Volume 29 #5

If evolution were true, there would be no woodpeckers. Yet there they are, brightly colored birds, daily chipping away at bark on our backyard trees (“Downy Woodpecker,” 2003; “Pileated Woodpecker…,” 1981). Though evolutionists suggest that the woodpecker’s uncommon characteristics are merely adaptations resulting from natural selection (Fergus, n.d.; Ryan, 2003), they cannot satisfactorily explain why these small birds have the ability to drive their beaks powerfully into the side of a tree, and survive to do it again less than a second later.

“Woodpecker” is the common name for just over 200 species (45 in America, 13 in Canada) of animals that are unique among fowl because they frequently cling to, and excavate, tree trunks 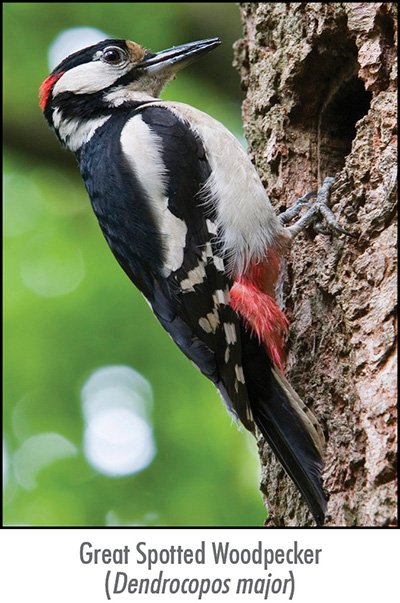 No other bird can do this. If the kind of force withstood by woodpeckers on a daily basis were applied to the cranium of any other bird, its brain would quickly turn to mush (see “Wondrous Woodpeckers…,” 2002). Moreover, if a human once smacked his head against a tree as hard as woodpeckers do repeatedly, he would suffer serious brain damage, even if he lived through the impact (“Knock on Wood,” 2004).

How do woodpeckers withstand such pressure? What prevents the force applied by the woodpeckers’ mighty neck muscles, and the sudden, swift impact, from literally beating the birds’ brains out? The answer is that their skulls are reinforced with bone, to keep their heads from shattering. David Juhasz wrote:

The forces involved in the woodpecker’s hammering away at trees are incredible, for the suddenness with which the head is brought to a halt during each peck results in a stress equivalent to 1,000 times the force of gravity. This is more than 250 times the force to which an astronaut is subjected in a rocket during liftoff…. In most birds, the bones of the beak are joined to the bones of the cranium—the part of the skull that surrounds the brain. But in the woodpecker the cranium and beak are separated by a sponge-like tissue that takes the shock each time the bird strikes its beak against a tree. The woodpecker’s shock-absorber is so good that scientists say it is far better than any that humans have invented (2001, emp. added).

Consider how the woodpecker takes his position on the tree. Chuck Fergus described this process:

To grip trees, a woodpecker has short, muscular legs and sharply clawed feet. On most species, two toes point forward and two backward. This opposed, “yoke-toed” arrangement lets a woodpecker climb with ease. Stiff, pointed tail feathers catch on the rough bark to brace the hammering body. During molt, the two middle tail feathers (the strongest ones) do not fall out until the other 10 have been replaced and can support the bird’s weight (n.d.). 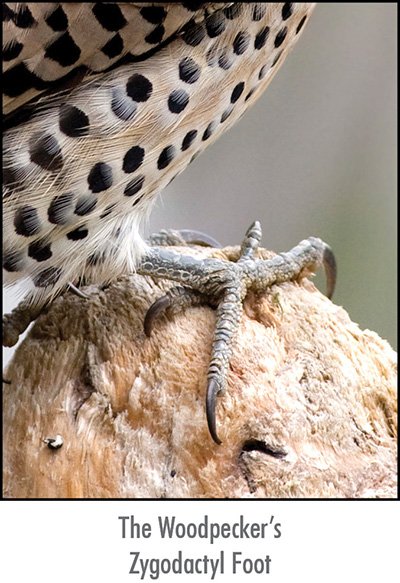 Most birds have three toes in the front of the foot and one in the back, but the woodpecker’s X-shaped (zygodactyl) feet are perfect for climbing, allowing the woodpecker to move in any direction on a tree trunk (see “Wondrous Woodpeckers…,” 2002; Bassett, n.d.; “The Malayan Woodpecker,” 2002 ). In addition to the amazingly well-designed X-shaped feet, the woodpecker needs its stiff—yet elastic—tail feathers to press against the tree in order to support its weight while it drills the trunk (“Woodpecker,” n.d.).

Next, consider the woodpecker’s tongue. Often extending five times farther than the beak itself, the tongue is so thin that it can reach into ants’ nests in trees. The tongue is also sticky, so it catches the ants and pulls them directly into the woodpecker’s mouth. The tongue’s adhesive, however, does not prevent the woodpecker from eating. The ants’ defense mechanism is no problem either, because the tongue comes complete with a system that negates ant poison (see Yahya, 2004). Juhasz commented:

How does the woodpecker know it has caught the insects? The Creator has given it a tongue with a hard spearhead with bristles pointing rearward, which is attached by tiny fibres of the protein collagen. As the tongue probes a tunnel, the impact of the spearhead on any object jams the head back along the shaft. Nerve endings are precisely located in the fluid-filled spaces between the collagen fibres. They provide the brain with information about the type of material contacted; thus, the woodpecker knows whether it has secured an insect or hit the hard wood of a tree. Once the insects stick to its tongue, the woodpecker pulls them from the tree, then pulls in its long tongue and scrapes the insects off into its mouth (2001).

Consider the beak itself. Like a chisel, it is capable of penetrating even the hardest of wood, and, unlike manmade saws, its point never needs sharpening.

It is argued, however, that because some woodpeckers are different from others (some find their prey on the ground instead of in trees, for example), they all must have evolved from a common ancestor, and that some woodpeckers are merely at different stages of evolution. For example, Juan Garelli wrote concerning the Galapagos:

There are, on the different islands of that archipelago, 14 different species of finch. The 14 species fill many of the roles we should expect—on another continent—to be played by other, unrelated birds. One of them, for instance, is a woodpecker finch. It has evolved a long woodpecker-beak but not a long tongue; it therefore makes use of a twig, held in its beak, to extract insects from bark.

If all the 14 species had been created separately, why are they all finches? If a woodpecker would serve as a woodpecker in the rest of the world, why should it be a finch that acts as a woodpecker on the Galapagos? But the facts make sense if the species all evolved from a common ancestor. If a single finch colonized the Galapagos and then speciated into the present 14 forms, we should expect them all to be finches: they all descended from a finch. The fact that they are finches is known from the homologies that define a finch. If they had been created separately, we should not expect them to share all the finch-homologies. The woodpecker would be the same woodpecker as anywhere else in the world; it would not have finch-defining traits. The Galapagos finches, therefore, provide evidence of evolution (n.d.).

The genetic changes necessary for such a modification are quite minor. No new 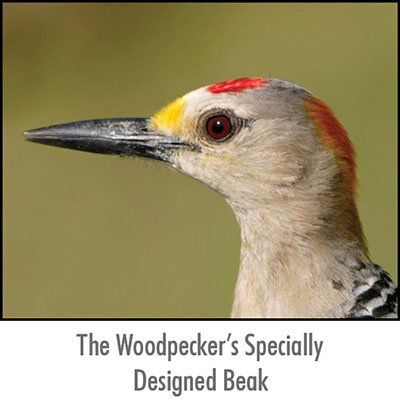 structures are required, merely an extended period of growth to lengthen an existing structure. It is likely that in ancestral woodpecker species which began to seek grubs deeper in trees, those woodpeckers with mutations for increased hyoid horn growth had a fitness advantage, as they could extend their tongue farther to reach prey. Some woodpeckers have no need for long tongues, and thus genes which shortened the hyoid horns were selected for. The sapsucker, for example, drills tiny holes in trees and then uses its short tongue to eat the oozing sap on the tree’s surface (and insects which stick to it) [2003, parenthetical item in orig.].

Garelli and Ryan wrote about microevolution (small-scale changes that result in minor biological variations, but not new kinds of animals), which is responsible for much of the diversity among animals (see Butt, 2005). But Garelli and Ryan did not document macroevolution, which is necessary for Darwinian evolution to be true. Some species of woodpeckers have changed over time, but they all remain woodpeckers. Woodpeckers do not “evolve” into other kinds of animals. To better comprehend this distinction, consider some questions to which evolutionists cannot provide adequate answers:

[H]ow could the woodpecker have evolved its special shock-absorbers? If it had started without them, then all the woodpeckers that were alive would have beaten out their brains long ago. Therefore, there should be no woodpeckers left. And if there had ever been a time when woodpeckers did not drill holes in trees they would not have needed the shock-absorbers anyway (2001).

Finally, we should also address the claim that woodpeckers are pests, and in no way beneficial. Woodpeckers help control insects (one woodpecker can eat up to 2,000 ants in one day) and limit the spread of tree diseases by destroying insect carriers. Also, the roosting holes created by woodpeckers are frequently used by birds of many other species (Clench and Austin, 1995, 15:90).

The fact is, woodpeckers are here, and they do things that defy Darwinism. Unlike evolutionists, creationists can adequately explain the woodpecker without contradicting their convictions concerning origins: God created the woodpecker with unique characteristics, and endowed it with particular instincts that cause it to do what it does. Woodpeckers are strong evidence for a divine Designer, as are all other
living organisms.