The Harmony of the Bible

You have been given a very challenging task: help write a 1,000-page book on human health and nutrition with 39 other people. The publishers of the book would like for it to become the best, most trusted, and complete book in the world on “eating healthy.” It should be accurate about everything: “Is chocolate good or bad for you? Is cow’s milk harmful or helpful? Is it okay to eat large amounts of pork? And what about sugar?” The book needs to be perfectly consistent (without contradictions), as well as in harmony with all scientific facts (whether known or currently unknown!). The publishers want to print a resource that can stand up to all manner of inspection. They want a book that will stand the test of time and be helpful to people for the next 2,000 years (if Jesus has not returned by then).

As if the job does not sound difficult enough, the publishers also inform you that the chosen authors of the book have a lot of differences. Several writers are from the U.S., but some are also from Canada, Mexico, and Brazil. Most speak English, but some speak Spanish, and two speak Portuguese. There are a number of cultural differences among the writers, including their diets. And only a few of the chosen authors know that much about nutrition. To top it all off, there is no financial gain for working on such a difficult project. No one will get a paycheck. Everything is being done for the good of humanity.

Could such a perfect, flawless health and nutrition book ever really be written? The answer is a big “NO.” In fact, no one expects such perfection from a manmade book. There are simply too many things that man does not know and too many things that people (even medical doctors and scientists) disagree about for such a health and nutrition book ever to be published.

BIG Differences Among the Bible Writers

Did you know that the Bible was penned by about 40 different human writers? And these men did not all live at the same time. Moses lived around 1,500 B.C., Isaiah around 700 B.C., Malachi around 400 B.C., and the New Testament writers wrote from about A.D. 50-100. That’s right! The Bible writers penned Scripture over a period of about 1,600 years!

The Bible writers were also very different—people from many backgrounds, cultures, and education systems. Moses “was learned in all the wisdom of the Egyptians” (Acts 7:22), as he grew up as the adopted son of Pharaoh’s daughter. Amos was a “sheepbreeder and a tender of sycamore fruit” from the town of Tekoa in Judah (Amos 7:14; 1:1). Nehemiah was the butler to a foreign king in the Persian city of Shushan. Solomon was the son of Israel’s most famous king (David). Luke was a doctor, Matthew a tax collector, Paul a highly educated Jew, and Peter and John were fishermen with little formal education.

Think also about the different kinds of writing in the Bible. Moses wrote a great amount of history and law in the first five books. Many of the teachings and prophecies in the last 17 books of the Old Testament are in the form of Hebrew poetry. The New Testament is made up of a lot of letters that were written to different people, in various places, for different purposes.

Perfect Unity Despite the Differences

Despite all of the different writers, time periods, places, cultures, languages, audiences, styles, and purposes, the Bible writers did what is humanly impossible: They wrote in perfect harmony with one another! They did not contradict each other, nor any known fact. Their writing has stood the test of time. As Isaiah wrote 2,700 years ago,  “The grass withers, the flower fades, but the word of our God stands forever” (40:8).

When dishonest people are afraid that others will check on their stories to see if they are true, liars will often be very vague about where they have been, who they were with, and what they were doing. Unlike sneaky liars, the Bible writers did not attempt to save themselves from inspection of others by being unclear about people, places, and events in the past. Throughout the Bible, the writers noted specific people in specific cities at specific times doing specific things. From Sargon of Assyria Conquring the city of Ashdod in Isaiah’s day (Isaiah 20:1) to the apostle Paul standing before first-century rulers like Felix, Festus, and Herod Agrippa (Acts 24-26), the Bible writers were specific—and spot on! They never contradicted each other, nor any known historical fact.

One central theme runs throughout the Bible—God’s plan of salvation through Jesus Christ. From the first prophecy of the coming Savior in Genesis 3:15 to the book of Malachi, the Old Testament tells us through promises, prophecies, and word pictures that “the Savior is coming.” Then, about 400 years after the close of the Old Testament, the first four books of the New Testament (Matthew, Mark, Luke, and John) were written to testify to the truth that, indeed, “Jesus, the Savior, came.” Acts-Revelation testify to the fact that “Jesus will come again,” and, in light of such a day, God calls all people to humble themselves and put their complete trust in Jesus, submitting to His Will and not our own (1 Peter 5:5-7).

The Bible writers dealt with all manner of things that God desires for mankind to know and do. Amazingly, whatever instructions they gave about whatever subject matter, they were always in perfect harmony with what the other Bible writers wrote. Consider two examples:

Human life was precious in Adam’s time, which is why it was sinful for Cain to murder his brother Abel (Genesis 4). Murder was also wrong in the times of Noah (Genesis 9:6), Moses (Exodus 20:13), David (2 Samuel 11-12), Isaiah (Isaiah 1:15,21), and the apostles (Revelation 21:8)—periods of time spanning some 4,000 years! The Bible writers were perfectly consistent in their disapproval of murder. Not all killing is murder (since sometimes death is accidental, and sometimes it is for punishment purposes—Genesis 9:6; Romans 13:1-4). But murder has always been wrong, and the Bible is perfectly consistent on this subject.

The Bible writers were also in perfect harmony in their praising of truth and disapproval of lying. Around 1,450 B.C., Moses wrote: “You shall not bear false witness against your neighbor” (Exodus 20:16).

About 500 years later, Solomon noted how “lying lips are an abomination to the Lord, but those who deal truthfully are his delight” (Proverbs 12:22). And then about 1,000 years after Solomon, Paul reminded the Ephesians: “Putting away lying, ‘Let each one speak truth with his neighbor’” (Ephesians 4:25). From beginning to end, the Bible writers’ message about truth is perfectly consistent: God is truth (John 14:6) and His followers are to be truthful, regardless of the situation.

Only God Could Give Us the Bible

As we discussed at the beginning of this Discovery issue, it is humanly impossible for so many very different writers to pen a perfectly consistent book. Yet, the Bible writers did just that. They wrote in perfect harmony with one another and with every known fact of the Universe. How could they do the humanly impossible? The answer is simple (and yet amazing!): they were informed and guided by the all-knowing, all-powerful God. 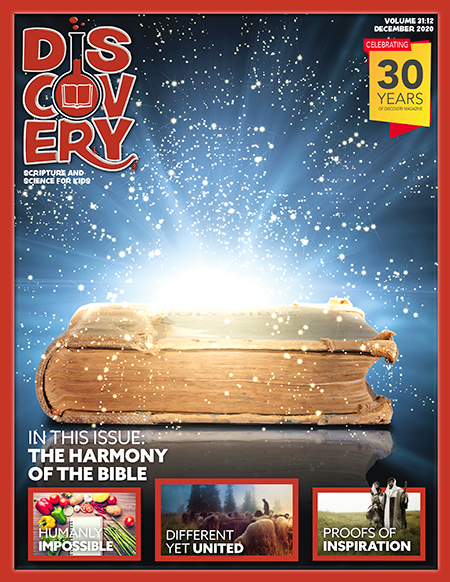 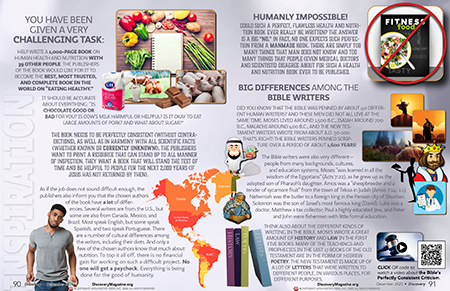 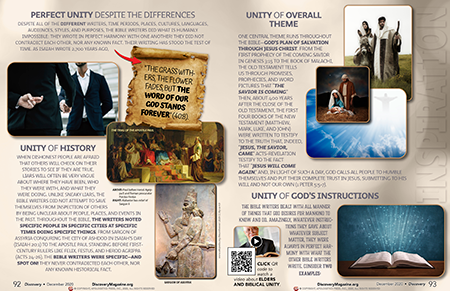 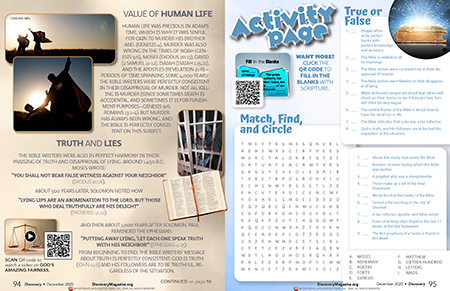 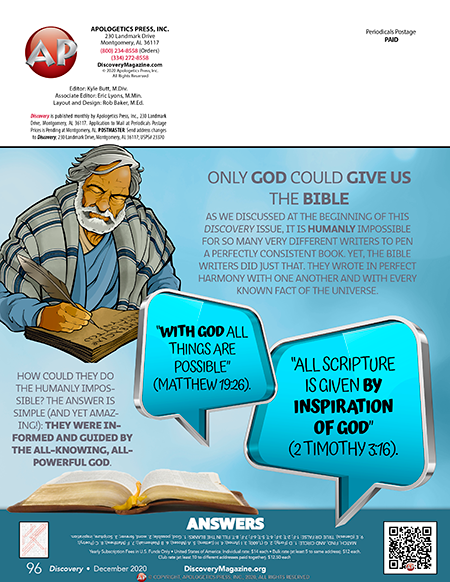