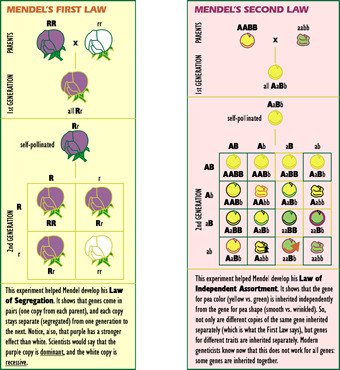 Why are all these things so different? What makes each of them like they are? Within the cells of humans, animals, and plants there is a tiny strand of material that scientists call deoxyribonucleic (dee-ox-ee-ribe-o-new-clay-ik) acid. Scientists call it “DNA” for short. Along this strand are sections of DNA called “genes.” The genes give us most of our physical features or traits. Also, everyone gets two copies of each gene—one from their mother and one from their father. The DNA code for each copy can be slightly different, and one copy can be stronger than the other. For instance, if you inherit the genes for black hair from your dad, and the genes for blond hair from your mom, you have a very good chance of having black hair.

An Austrian scientist by the name of Gregor Mendel was the first person to discover the basic ways in which genes worked, although he did not know about DNA. After experimenting with peas in his garden, he found that traits were passed from one generation to the next according to certain rules. These became the laws of genetics.

Thanks to these laws, we know why children can look so much like their parents or grandparents. And thanks to these laws, we know that cows always give rise to cows, and tulips always give rise to tulips. The Bible teaches the same principle. God created “the herb that yields seed according to its kind, and the tree that yields fruit, whose seed is in itself according to its kind” (Genesis 1:12). Let us thank God for creating a world in such a wonderful way!

Does God Break His Own Laws?

Something Can't Come from Nothing