Since the 1960s, widespread misconceptions regarding the religious orientation of the Founders of the American Republic have prevailed. The prevailing propaganda suggests that most of the Founders were either atheists and religionless at most, or deists at the very least. Deism is currently defined as: “The belief, based solely on reason, in a God who created the universe and then abandoned it, assuming no control over life, exerting no influence on natural phenomena, and giving no supernatural revelation” (American Heritage…, 2000, p. 479). This assessment of the Founders’ beliefs is so thoroughly embedded in societal consensus that the one who questions it is immediately discounted as an ignorant fool.

But the real ignorance is seen in the misrepresentation of American history and the successful perpetration of one of the big myths of our time. Immediately after World War II, revisionist historians, who seem to have possessed an ardent hostility toward Christianity, were determined to expunge the role that God, the Bible, and the Christian religion played in the founding of America. Nevertheless, an honest seeker of truth may overcome their big myth by simply returning to the original documents. He will be overwhelmed with the magnitude of the Founders’ reliance on and commitment to God and Christianity.

Take, as one of a myriad of examples, an address delivered by an early President of the United States, John Quincy Adams. Not only did John Quincy live during the founding era 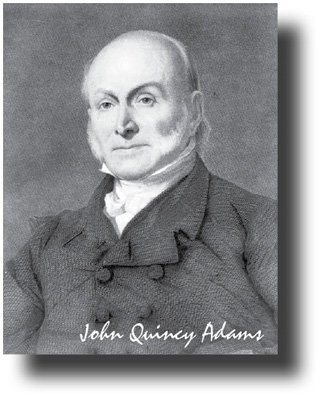 (born in 1767), not only was his father a primary, quintessential Founder, but John Quincy was literally nurtured by his father in the vicissitudes and intricacies of the founding of the Republic. John Adams involved his son at an early age in his own activities and travels in behalf of the fledgling nation. He accompanied his father to France in 1778, became Secretary to the American Minister to Russia, was the Secretary to his father during the peace negotiations that ended the American Revolution in 1783, served as U.S. foreign ambassador, both to the Netherlands and later to Portugal, under George Washington, to Prussia under his father’s presidency, and then to Russia and later to England under President James Madison. He served as a U.S. Senator, and then Secretary of State under President James Monroe, and then as the nation’s sixth President (1825-1829), and finally as a member of the U.S. House of Representatives, where he was a staunch and fervent opponent of slavery.

Here was a man who was sufficiently intimate with the founding era to know whereof he spoke. He was there—and his life not only spanned the founding era, but was intricately intertwined with the circumstances surrounding the birth of the country. While Secretary of State, in a July 4, 1821 speech to the citizens of the nation’s capital in Washington, John Quincy Adams articulated a penetrating summary of the theological beliefs of the Founders:

From the day of the Declaration, the people of the North American Union and of its constituent States, were associated bodies of civilized men and Christians, in a state of nature; but not of Anarchy. They were bound by the laws of God, which they all, and by the laws of the Gospel, which they nearly all, acknowledged as the rules of their conduct (1821, p. 26, emp. added).

Observe: this well-qualified eye-witness to the founding of the Republic claimed that all of the Founders believed in the God of the Bible. Not an atheist among them! He further claimed that nearly all—the vast majority—of the Founders also believed in the Gospel of Jesus Christ and the Christian religion. Case closed. So who should we believe? The ACLU, the NEA, Americans United for Separation of Church and State, revisionist historians, liberal politicians, activist judges, and socialist educators—or John Quincy Adams?