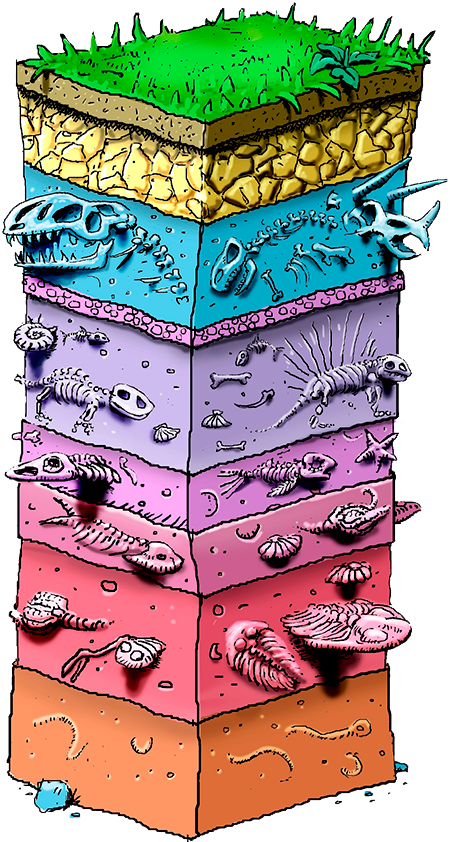 Have you ever wondered what creatures were like before the Flood? Nobody knows for sure. Even though God made the basic kinds of life during Creation week, He built into their genes the ability to make a lot of variety as they reproduced. For example, the variety that has been bred from the original dogs (“canids”) that God made likely includes more than just the varieties of domestic dogs (from toy poodles to Irish Wolfhounds). It probably includes the wolves, coyotes, foxes, jackals, dingoes, and other canids. Because of the variety of animals we see today within each of the kinds God made, it’s hard to know what the original pair that Noah took on the ark looked like. It’s also true that the pre-Flood world “perished” in the Flood (2 Peter 3:6), making it hard to know what it was like. When we look at the fossil record, however, we can learn a lot about many of the types of life that existed before the Flood. After all, a fossil is a “snap shot” of what a life form looked like or did at a certain time in the past.

So, when we find fossils in the Paleozoic or Mesozoic rock layers, we are getting a glimpse of some of the amazing creatures that lived before the Flood and died in the Flood—many of which are now extinct.

When we look at the order of appearance of fossils, moving from deeper in the ground (Paleozoic) to shallower (Cenozoic), and how they are grouped, we see that the fossil record seems to record the progress of the Flood as it gradually destroyed the different areas creatures lived in (habitats) before the Flood. As we have explained in other issues of Discovery, Creation scientists today believe the Flood started at the base of the oceans when “all the fountains of the great deep were broken up” (Genesis 7:11), and eventually resulted in the flooding and destruction of the entire surface of the Earth. As we would expect, at the bottom of the Paleozoic layers (where the Flood began) the first creatures we see are ones that lived on the ocean floor (like arthropods and brachiopods), followed above those layers by creatures that swam in the sea (like cephalopods and fish). Amphibians (which can live in the water or on land) appear in the next layers (buried as the Flood moved towards the coasts of continents), followed by reptiles (which live on land near water), then birds and mammals. Many of the larger mammals we see on the planet today, as well as humans, probably lived in one habitat together that was completely destroyed in the Flood, leaving behind very little fossil evidence in Flood layers. (They are found in the Cenozoic Layers, for the most part.) For the rest of this issue of Discovery, we will look at several of the interesting life forms that lived in the pre-Flood world that are found in these fossil layers.

Isn’t it amazing that science supports Scripture so well? Sadly, in spite of the evidence, many “will turn their ears away from the truth and be turned aside to fables” (2 Timothy 4:4)—like evolution. But remember: the truth will always be made clear to those who are sincerely interested in finding it (Matthew 7:7-8). God expects us to “test all things” and “hold fast what is good” (1 Thessalonians 5:21). When we test the theories of evolutionists, looking at the physical evidence, we find that they cannot explain the evidence. Creation and the Flood, however, fit the evidence and are powerful witnesses of the power of God.